Home Government Has the GOP Become a Threat to America? 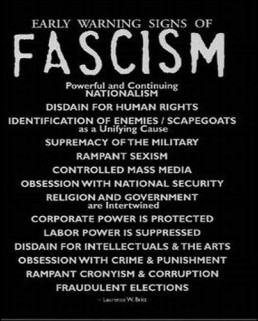 Has the GOP Become a Threat to America?

The current leadership of the GOP is the most dangerous threat to America in the history of this country. Hyperbole? I wish it were. But the evidence clearly demonstrates that the GOP has mounted a concerted effort to circumvent the American people and install a modern-day feudalism that effectively abolishes the will of the people and their elected officials to allow our cities and states to be run by corporate-like CEOs – and there’s no telling where it will go from there.

In spite of the GOP claim that they believe in limited government, The Michigan Messenger has reported that newly elected Republican governor, Rick Snyder, is poised to sign an emergency management bill that will hand total control of local governments over to “emergency managers” appointed by the government.

“In a party line vote, and despite impassioned speeches of protest by the body’s Democratic minority, the Michigan Senate approved legislation that threatens to take over and even dissolve local governments that refuse to balance their budgets by breaking labor contracts.

“According to the law, which has already been approved in the House, the governor will be able to declare “financial emergency” in towns or school districts and appoint someone to fire local elected officials, break contracts, seize and sell assets, and eliminate services.”

According to the Messenger, in a last ditch effort to protect the rights of the citizens, Democrats tried to add an amendment that would require “Emergency Managers” to hold monthly public accountability meetings to inform the citizens of how they are governing, but the amendment was voted down by the Republican senate.

Mark Gaffney, president of the Michigan state AFL-CIO is quoted as saying,

“It takes every decision in a city or school district and puts it in the hands of the manager, from when the streets get plowed to who plows them and how much they are paid. In schools, the manager would decide academics or if you have athletics. This is a takeover by the right wing and it’s an assault on democracy like I’ve never seen.”

Thus, the GOP, this party of “limited government,” intends to completely take over the local governments under their jurisdiction, rescind the will of the voting public, and thumb their noses at any amendment that will require public accountability. And this power-grab is also taking place in other Republican-led states around the country.

This action and what’s going on in Wisconsin and other Republican-led states clearly demonstrates that the leaders of the modern GOP are without limits. To put it bluntly, these people are un-American. They are fundamentally opposed to our way of life, and greatly prefer a dictatorial form of government. George W. Bush let the cat out of the bag by admitting it when he said, “If this were a dictatorship, it’d be a heck of a lot easier…just as long as I’m the dictator.”

Americans need to wake up and connect the dots. The GOP now claims that they are so concerned about the deficit that they must suspend the United States Constitution, yet they weren’t concerned enough about it to suspend giving the top 2% of the population a tax cut that will add $4 Trillion to the deficit over the next ten years. Neither were they concerned enough about the deficit to discontinue taxpayer subsidies to Exxon, one of the riches corporations in the world, nor prevent the political class in congress from giving themselves an extra $93,000 in “petty cash.”

And while they claim to love our troops, they rushed them into battle in Iraq without the necessary gear to protect their lives, and they awarded Dick Cheney’s former corporation, Halliburton (KBR), a no-bid contract to provide the troops with contaminated water and do such shoddy contracting work that at least 18 of our troops were electrocuted while in the shower. The Department of the Army classified their deaths as “negligent homicide.” Then, if that weren’t enough, the GOP fought tooth and nail against giving the troops any additional benefits when they left the service – ins pite of the fact that our troops in Iraq were forced into extended tours of duty and spend more tours of duty in a battle zone than any other troops in American history.

The GOP has demonstrated over the past forty years that they are conniving, lack limits, self-serving, and have little or no respect for the rule of law. Richard Nixon was forced to resign after being involved in the plot to burglarize the DNC in theWatergate Scandal, and there’s evidence that strongly suggests that Ronald Reagan was in collusion with the Iranians to hold American hostages until after he won the presidential election (The hostages were released immediately after he took the oath of office). Reagan also traded arms with his newfound friends during the Iran/Contra scandal. In addition, he flooded American inner cities with drugs to support his illegal war in Nicaragua, then suggested that inner city children “just say no.”

Republican, George W. Bush then went on to lie us into the war with Iraq, costing more than a million lives, including the killing and maiming of thousands of Americans troops. His administration also spied on American citizens, Cheney committed treason by outing a CIA agent, they committed war crimes that included torturing prisoners, and they purposely ravaged the national treasury. Now they’re using the excuse of a depleted treasury to claim “a national emergency” in order to mount yet another assault on the Constitution. And in the meantime, Republicans in congress are demonizing an entire religion as “Islamofascists” to spread hatred and fear and to distract our attention from their horrific agenda.

Doesn’t that feel just the least bit like deja vu?  If it doesn’t it’s probably because you’re a victim of the GOP assault on our educational system. They have a vested interest in keeping you uninformed, because they don’t want you to realize that while you may be on their side, they’re not on yours.  They think of the American people as stupid, and they want to keep us that way.

“Fascism: A radical, authoritarian nationalist political ideology. Fascists seek to organize a nation according to corporatist perspectives, values, and systems, including the political system and the economy.” – Wikipedia