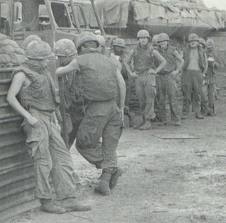 Jim Hopkins was a Marine. He was born on the Marine Corps Birthday, November 10th. He was a Vietnam Veteran, who was suffering from exposure to the dioxin used to kill the foliage in Vietnam.

The purpose was to strip the jungle of places for the enemy to hide. They nick named it Agent Orange because the fifty five gallon drums used to transport it had a big orange band around the center so it would be clearly identified as a very dangerous chemical and one had to use extreme caution when handling, in addition to the skull and crossbones marked DANGER on each drum.

Jim Hopkins’ screamed at the top of his voice for help! His cries went unanswered, untreated, mistreated, poorly treated, badly treated, and seldom treated. A Vietnam Marine “grunt” combat Veteran is not your typical boardroom “suite” type guy. Especially since it was less than ten years since he left the Marines.

The affects of Agent Orange took its toll on the physical part of Jim’s Body. The Post Traumatic Stress Disorder did the psychological part. He was not in a position to calmly sit and discuss the reasons why the Department of Veterans Affairs should take care of him and his needs.

After months and years of crying on deaf ears Jim Hopkins decided to the speak in the language he knew best. On March 14, 1981, he drove his Jeep through the front doors at the Los Angeles VA Wadsworth Hospital and sprayed the lobby with seven point six two rounds from his M-14 rifle. Jim finally got their attention. Most of his rounds went into the pictures of Ronald Regan and Jimmy Carter.

This action cost Jim Hopkins his life two months later. He was found dead with an open container of alcohol and sleeping pills next to him.
The picture at Jim’s death was more contrived then the infamous black glove found by Mark Furman at the O. J. Simpson trial. A good speculative reason for Jim’s death was that he went on a series of speaking engagements advocating for Veterans and exposing the VA and its treatment of Veterans.

Jim’s death should not be in vain. His actions have greatly affected the treatment of veterans in Los Angeles and throughout the United States.

As recent as two years ago a Veteran was overheard saying, “I guess I’ll have to go get my Jeep and M-14 to get help.” This was twenty nine years after Jim’s death. That is a legacy that has exceeded all others.

March Fourteenth needs to be remembered as JIM HOPKINS DAY!