***Update: 03-19-11, 4:05 EST.  The No Fly Zone roll out plan has move into stage two with U.S. and British ships and submarines launching 110 cruise missiles. The estimated twenty targets were against Gadaffi’s integrated air defenses and communication nodes, primarily in the West. British planes are also reported to be involved in an undescribed operation, probably post strike recon.

Reporters in Benghazi heard ‘five loud explosions’  outside the city, initially fearing the beginning of a night attack on the city. Then news came in about the cruise missile strikes. I would have suspected that the rebels would have already disabled air defence facilities. Possibly some of these cruise missiles were used against forwardly deployed Tripoli formations  involved in the Benghazi attacks.

Sarkozy: French jets protecting Benghazi air space…”Our air force will counter any aggression.” French plans have conducted reconnaissance flights all over Libya.  No word yet about drones being employed for patrolling the coast road and real time video intelligence on Gadaffi attacking units around besieged towns like Misrata.

David Cameron….”Cannot allow the slaughter of innocent civilians to continue”.

French Rafale and Mirage jets  are already over Libya. Tripoli’s Benghazi’s attack pulls back. No verification that planes attacked armor and artillery columns, however they will be more exposed now to attacks, having failed to break into populated Benghazi areas where air attacks would have civilian casualties. Sarkozy states the Arabs nations have informed Gadaffi that he must not only stop attacks, but also pull back from besieged cities. While this indicates an unmolested pullback opportunity, Gadaffi’s refusal may trigger attacks on retreating columns to eliminate their use in future attacks.

Below is what currently is being reported as one of the two rebel jets being shot down over Benghazi.
So far there seems to be no way of knowing if the Tripoli attackers had anti-aircraft weapons, or if Benghazi defenders shot it down with frinedly fire.

Next is a Tripole fighter bombet that was brought down by rebel gunners. Indentity papers on the dead pilots revealed one was a Syrian, confirming reports that Veterans Today have bee receiving during the week that mercenary pilots were being used by Gadaffi to guard against more defections by Libyan pilots…and concerns over bombing their own people. 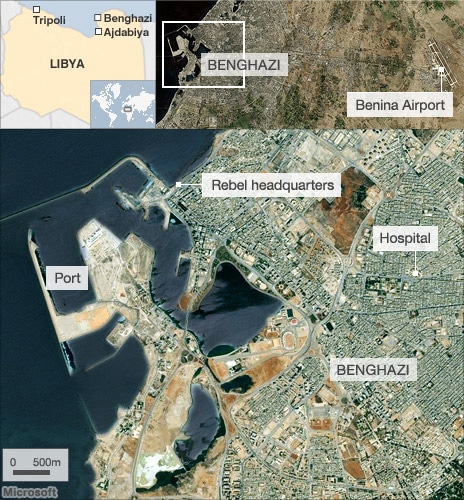