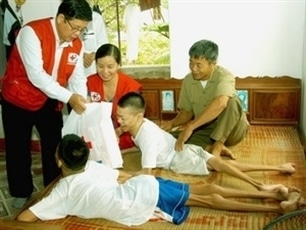 “Dumped almost 100,000 cu. m of AO/dioxin contaminated land at the Bien Hoa airport”. Exactly where?  No incineration?  Are they being misguided?

The Ministry of National Defence has briefed foreign military attachés on the ministry’s efforts as well as its international and US cooperation in overcoming the aftermath of toxic chemicals left by US troops during the war in Vietnam.

At the event held in Hanoi on March 25, the ministry said it has basically assessed the Agent Orange/dioxin contamination levels at three airports: Da Nang, Bien Hoa (in southeastern Dong Nai province) and Phu Cat (in central Binh Dinh province).

Despite many efforts, results in dioxin cleanup have failed to meet requirements and have presented many difficulties and challenges.

The ministry emphasised the significance for the ministry’s agencies and units to increase potential, expand cooperation, share information and join efforts with domestic and foreign individuals and organisations to clean up and restore the environment.

The South African military attache spoke highly of the ministry’s efforts to overcome the aftermath of dioxin/AO in polluted areas.