Home Life Our Call to Service Can Mean Many Things

Recent events have reminded me of the power of youth in our country, and how our experiences as young people frame who we become, and how we contribute to the world around us. In my role as president of the Congressional Medal of Honor Society, two key areas of life came together in perfect intersection in Washington, D.C., on March 25.

There, I had the privilege to see the Congressional Medal of Honor Society bestow the American Spirit Award on a Boy Scout from Omaha named Jack Pape. The American Spirit Award recognizes individuals who demonstrate extraordinary skill, professionalism, and a spirit of excellence in a challenging situation. One of the recent recipients was a man by the name of Chesley Sullenberger, who landed his plane on the Hudson River. So you can see, it’s a tremendous honor for a 17-year-old boy.

In 2008, Jack jumped into action to administer first aid and help save lives at the Little Sioux Scout Ranch, the site of the tornado that tragically killed four Boy Scouts. A year later, he performed CPR on a young boy who was pulled from a hotel swimming pool.

Note that I didn’t say “was” an Eagle Scout. Being an Eagle, even at the age of 79, is foundational to who I am. I was an Eagle Scout when the badge was pinned on my Scout uniform so many years ago, and I carry those principles with me still today.

Much like Jack never expected to find the circumstances that earned him the American Spirit Award, my Scouting experience benefitted me in unexpected ways. In Scouting, I learned about patriotism, service, courage and loyalty, and it was during combat in Vietnam, and six years as a prisoner of war in Hanoi that those principles were put to the ultimate test and were proven to be true. I believe they are part of the reason I survived.

When I shook Jack’s hand in Washington, I had to share a few words with him. I wanted him to know his experience in Scouting could be both a blessing and a curse. “A curse?” you ask. “Yes, because once people know you are a Scout, so much more is expected of you.” I know he can live up to it.

I’m so impressed by what Jack has done in his 17 years of life. He has taken the words of the Scout Oath to heart, “On my honor, I will do my best to do my duty to God and my country …”

I look at Jack and marvel at how he could have acted so bravely at such an early age. I believe the answer lies in the values and character he undoubtedly learned at home, and with those he learned with the Scouts.

Our country needs more people who will put in more than they will take out. We need more people like Jack Pape.  And, perhaps more than ever, we need Scouting. 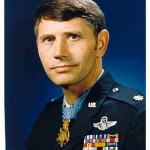 About the Writer: Retired Col. Leo Thorsness is a resident of Madison, Alabama, and the current president of the Congressional Medal of Honor Society, whose small membership is made up of recipients of the Medal of Honor—the nation’s highest award for military valor. He received the Medal of Honor in 1967 for his heroic actions in the U.S. Air Force during the Vietnam War. Before Col. Thorsness was aware he had received the medal, his plane was shot down over North Vietnam, and he spent six years as a prisoner of war in Hanoi.