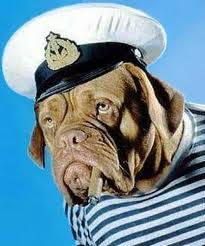 Following the [left wing directed] RVN debacle many folks said that Americans would never again denigrate Soldiers, Sailors, Marines, Airmen and CoastGuardsmen. True that mom, dad, sisters, brothers and other family members for the most part are proud of our military. Sure there are exceptions but for the most part, families stick by their sons, daughters, moms, dads, cousins, aunts, uncles and other family members that are in the military. Many Americans are supportive and proud of the American Military. There are, however, many people in America that is destructive, insulting, demeaning, denigrating, derisive, superior to, degrading and view the Military as “bottom feeding low life’s” (borrowing a term from a well know right-wing radio personality). Many leftist contributors to online programs delight in deriding the military. Consider the following:

Quaint little saying:
“Sailors and Dogs Keep off the Grass.” The preceding quaint saying may have been posted on lawns outside of the massive Navy base at Norfolk Virginia. It is attributable to civilian residents and business interests in the Norfolk area.

The “Sailors and Dogs Keep off the Grass” quote is very tame. There are people that contribute to this site that identify with the writer noted below:

A Beastly Opinion
By Ian Murphy
So, 4000 rubes are dead. Cry me the Tigris. Another 30,000 have been seriously wounded. Boo f…ing hoo. They got what they asked for—and cool robotic limbs, too.

Likely, just reading the above paragraph made you uncomfortable. But why?

The benevolence of America’s “troops” is sacrosanct. Questioning their rectitude simply isn’t done. It’s the forbidden zone. We may rail against this tragic war, but our soldiers are lauded by all as saints. Why? They volunteered to partake in this savage idiocy, and for this they deserve our utmost respect? I think not.

The nearly two-thirds of us who know this war is bullshit need to stop sucking off the troops. They get enough action raping female soldiers and sodomizing Iraqi detainees. The political left is intent on “supporting” the troops by bringing them home, which is a good thing. But after rightly denouncing the administration’s lies and condemning this awful war, relatively sensible pundits—like Keith Olbermann—turn around and lovingly praise the soldiers’ brave service to the country. Why?

What service are they providing? I don’t remember ordering 300,000 dead Iraqis—although I was doing a lot of heavy narcotics back in ‘03. Our soldiers are not providing a service to the country, they’re providing a service to a criminal administration and their oil company cronies. When a mafia don orders a hit, is the assassin absolved of personal responsibility when it’s carried out? Of course not. What if the hit man was fooled into service? We’d all say, “Tough s..t, you dumb Guido,” then lock him up and throw away the key.

We all learned recently that the Bush administration instituted its policy of global torture during quaint White House meetings. And we already know this war was started with lies. Shame on them. But what about the people who physically carry out these atrocities? We’ve seen bad apples punished and CEO despots walk free, but all verbal and written denouncement is focused on our leaders. Surely, they deserve that and more—decapitation, really. But why can’t we be critical of the people who have actually tortured and murdered hundreds of thousands of Iraqi citizens? We deride private contractors like Blackwater for similar conduct—why are the troops blameless?

Take John McCain, or “McNasty,” as they called him in high school. While the conventional wisdom says that Obama gets a pass from the media, McCain is clearly the least scrutinized presidential candidate. He diddles lobbyists, sings about bombing Iran and doesn’t know Shiite from Shinola, yet he remains unscathed, cloaked in his Vietnam “hero” legend.

Again, what is heroic about involving one’s self in a foolish war, being a s…y pilot or getting tortured? Yeah, it must have sucked, but getting your ass kicked every day for five years doesn’t make you a hero—it makes you a Bad News Bear.

Here’s where America’s military lust becomes a true perversion. If we truly valued military prowess, John McCain would be viewed as a failure. But duty alone is enough to inspire our gratitude. Hence the left’s tendency to obligatorily praise the troops while decrying the sum of their actions. Good thing, too, because this war is unwinnable.

George Washington warned that the biggest threat to the young United States was in keeping and deploying standing armies. An overextended military is a drain on any nation—eventually it will break. It also pisses off the people your army is standing on. We’ll never heed this warning and break the cycle of violence, so long as military service is so reflexively praised.

People want to be respected. And in a country with an abysmal education system and disappearing economic opportunities, they seek respect wherever they can find it—as street corner toughs or as government-sanctioned thugs. It beats McDonald’s. But this kind of victim-of-circumstance-sympathy for the troops turns them into automatons, neither deserving of praise or damnation. Disregarding the Stop Loss back door draft travesty, they had a choice.

We’re a squeamish people; we eschew heated debates and, in principle, strive for political correctness when arguing with those who hold contrary views. The left does anyway; the right makes no such pretense. That’s one of the reasons liberals have taken such a beating in the last few decades.

As plainly stupid as religious belief or participating in immoral and illegal wars may be, the castrated left can only argue against these things by appealing to reason. In America, that fails every time. We respond best to partisan venom and ad hominem attacks.

The right has no problem painting their opponents as cowards or godless heathens, but liberals—instead of sticking to the merits of their arguments—fight those accusations by leaning right, praising god and guns, and pandering to the people who cling to them. The left has taken to appeasing bullies as their only course to victory. And that’s no victory at all.

Liberals need to start calling a moron a moron—and openly mocking that moron if his positions or actions are indefensible. Just as Limbaugh or Hannity insults the left, tilting the battlefield so liberals are left scrounging for their patriotic bona fides, the left must begin attacking stupidity whether in the form of religious nonsense, “free market” capitalism or military worship.

Instead of blo…g the troops every chance we get, to prove our patriotism and insulate ourselves against attacks from the right, liberals should grow a pair and start dishing the damnation.

How despicable must a military campaign be before Americans turn on their beloved troops? After chiding the “War on Toddlers” as fool-headed and pointlessly barbaric, would Keith Olbermann still thank the troops for their service? After the “Great Grandmother Slaughter of 2010,” will the press remove the fat military cock from its mouth? Following “Operation Murder Fluffy Kittens,” will the left finally nix the “honored service” crap? No. No, they won’t.

Condemning the “troops”—a term coined during the Gulf War—is almost unthinkable. And it won’t win you any awards. “Troops” are a monolithic entity, a cohesive group of pride-inspiring order-takers. Whereas an individual soldier is accountable for his or her actions, the “troops” are too abstract to blame. For Americans, there are only bad apples, never bad orchards.

But what kind of world would we rather live in: one where fools are admired for being fooled and murderers are extolled for murdering, or one where we have the capacity to step back and say, “I don’t care who told you to do what and why; you’re still an asshole!” Personally, I’d rather live in a world where people who act like retards are treated like retards: executed in Texas.

Americans fear the truth. It’s the slipperiest slope of all. Once we start extending responsibility beyond those who gave orders to those who took them, it won’t be long before we’re blaming ourselves. And we can’t have that.

Well, guess what, kids? The Iraq debacle is a pointless bloodbath—and every time you applaud those who “bravely” fill that tub, you’re soaking in it.
View Original Quote

“It can be difficult to place blame on troops since they are just products of a system, but many of them are war criminals.” (ibid.)

John F. Kerry Thinks US Soldiers Are Uneducated
By Warner Todd Huston | October 31, 2006 | 10:39
The Pasadena Star News yesterday reported on a rally for failing California Democratic gubernatorial candidate, Phil Angelides, at which John Kerry warned students in the audience that if they didn’t get an education they would have no other alternative than to be forced into the US Armed Forces.
“Kerry then told the students that if they were able to navigate the education system, they could get comfortable jobs – ‘If you don’t, you get stuck in Iraq,’ he said to a mixture of laughter and gasps.”
Read More

Other general left wing points of view for the Military include (but are certainly not limited to):

How about liberal Brits?
There’s too much praise, even worship, of people in uniform these days. Now we’re being told in Britain that former members of the military should get privileged access to and healthcare because of their great sacrifice for us all. This is balderdash. Most people in the military are just stupid people who couldn’t get any other job. They’re not braver than anyone else. They’re not more patriotic than anyone else. They have two distinguishing qualities : Stupidity and sociopathology.
Most People Who Join The Military Are Stupid

O.K. Liberals – lots of good reading for you on the web. Go to it and have a good time! Enjoy your protected birthright to demean and insult the Armed Forces.

People use their First Amendment rights to complain, criticize, ostracize, and ban from liberal cocktail circles any positive comment about The United States of America and our Military. There will always be an enemy. There will always be a need for brave citizens to become professional members of the Armed Forces. Someone has to satisfy the liberal need to adapt a “I am superior to you” and “I know what others must think and how they should live” front.

Freedom – an individual value protected by those who sign the blank check to you the people.