Osama bin Laden, rich, handsome, and educated was one of those recruited by the CIA as the “Prince” to head to Pakistan and help organize the recruitment of Muslim Jihadists from around the world. Tens of millions of dollars of CIA money funded the office of “ Maktab Alkhadamat” Office of Services to facilitate Muslim Jihadists joining the American fight against the Soviet Union. 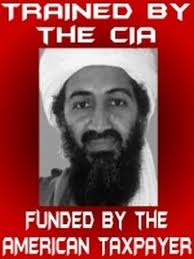 NeoCons and conservative intellectual advocates of the Reagan Doctrine such as columnist Charles Krauthammer, ambassador Jean Kirkpatrick, Richard Perle and many others should always remember that they and the late president Ronald Reagan are the ones who re-invented, supported, financed and armed modern “jihad” after it has been dead and dormant for over 700 years.

When Ronald Reagan declared in his 1985 State of the Union Message his support for the “Mujahideen” as Freedom Fighter, he unleashed a monstrous “genie” that refuses to go back to the “bottle. Little did the conservative NeoCons knew these Mujahideen would one day haunt and attack the very hand that created and supported them.

In his determination to oppose and undermine the Soviet Union and its expanding military and political influence around the world, the Reagan White House with input and management from the CIA sought to defeat the Soviet Union in Afghanistan and else where.

Someone must have been very clever within the Reagan Administration to even suggest the name “Mujahideen” as the name of “Muslim Fighters” in Afghanistan. Billions of US dollars were spent on recruiting potential fighters from around the Arab and Muslim World to come to Afghanistan and join the Jihad.

Osama bin Laden, rich, handsome, and educated was one of those recruited by the CIA as the “Prince” to head to Pakistan and help organize the recruitment of Muslim Jihadists from around the world. Tens of millions of dollars of CIA money funded the office of “ Maktab Alkhadamat” Office of Services to facilitate Muslim Jihadists joining the American fight against the Soviet Union.

It is these Muslim Jihadists that are now menacing their former sponsors. Many of the Arab governments that allowed the CIA to recruit its citizens for the fight in Afghanistan later became the victims of these “American Jihadists”. The late Robin Cook, the former British foreign secretary gave a very logical explanation of the meaning of and defining Al-Qaeda, as database and computer files of the tens of thousands of former veterans of the CIA Mujahideen War in Afghanistan. One should not forget and should keep in mind the Pakistani’s Inter-Service Intelligence Agency, which was the commercial manager of the Mujahideen war against the Soviet. Key officers earned tens of millions in the process with some officers continued, today, to give support and aid to the Taliban’s and insurgents in Pakistan and Afghanistan. The late Benazir Bhutto was also the mentor and funding agent for the Taliban’s as they rose to power in Afghanistan.

In the Arab world where citizens usually have a hard time getting a passport and must go through government “security agencies” for approval, the CIA was so actively recruiting volunteer fighters and was able to get them passports and tickets in couple of weeks setting up direct flight to Peshawar.

When the Soviet Union was defeated and pulled out of Afghanistan, the CIA did not have any future wars for these veterans of the Jihad and most went back to their country of origin, only to be arrested and jailed as potential danger to these regimes.

Let us not forget and never let those leading America’s war on terror that they are the one who in the first place are responsible for the resurrection and rise of modern day Islamic Jihad. It was they who redefined and repackaged Jihad to fit their Reagan Doctrine. And it was they who organized and managed the Holy War in Afghanistan. I think the NeoCons owe the American people and all victims of terror an apology and must be held accountable for the crimes committed.