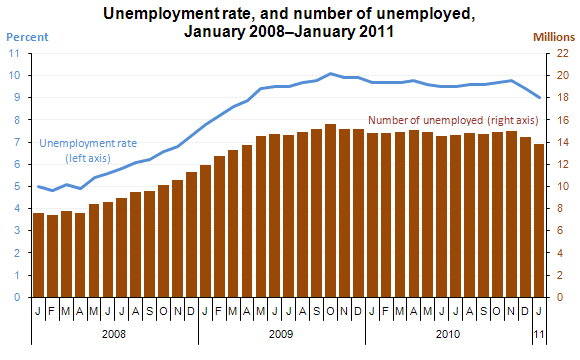 Behind Those March Unemployment Figures

Although 230,000 new private sector jobs were added to the work force last month—pushing down the unemployment rate o 8.8%—-nearly 14-million Americans remain jobless and millions more among the long-term unemployed have dropped out of the statistics because they have given up even trying to find work, so the true jobless rate is far higher. Tula Connell, Managing Editor at the AFL-CIO writes, “While the official unemployment rate is 8.8 percent, it’s 15.7 percent if unemployed, underemployed and those who have given up looking for work are included—more than 24 million people.”

As columnist Bob Herbert put it in The New York Times March 26th, “Since there is just one job available for every five individuals looking for work, four of the five are out of luck.” While President Obama told a public gathering “We have to keep the momentum going” he has obviously grossly failed to achieve that goal, and the focus of his energies appears to be on starting new wars in oil-rich countries. Even as 1.8 million workers found private sector jobs in the last 13 months, The Los Angeles Times rightly observed, “The bad news is that’s only a fraction of the 7.5 million jobs that were lost during the recession that began during the George W. Bush administration.”

“The median and average duration of unemployment spells both increased (according to the government figures for March), with the latter setting another record high at 39 weeks” and those “unemployed for more than 26 weeks also hit a record high of 45.5%,” writes Dean Baker in Jobs Byte, published by the Center For Economic and Policy Research of Washington, D.C. Compounding their misery, Congress scotched unemployment insurance last Nov. 30th for 800,000 long-term job seekers. If you think these are just statistics, walk into any church soup kitchen and see for yourself. (At the time, Sen. Mark Kirk (R-Ill.) claimed the benefit extension would be “misguided.”)

And as they have been historically, the unemployment rates for America’s ghettoized Afro-Americans runs about twice that for whites. Calling for “a War on Unemployment,” Marc Morial, President and CEO of the National Urban League, the nation’s largest civil rights organization, offered a 12-point blueprint for government intervention to create jobs. This includes opening 100 Urban Jobs Academies, energizing small business lending, a new Summer youth jobs program, setting up Green Empowerment Zones, entrepreneurship centers, and using the money that comes from closing $1-trillion in “tax loopholes” to go to education. “This unfair, Swiss cheese-style tax code is costing revenue and not creating jobs. We could lower rates for everyone if we eliminated loopholes and made the tax code more fair.”

Reducing federal spending, Morial says, is the wrong way to go. “Our analysis shows that the proposed cuts (under consideration in Congress) “could kill as many as 700,000 jobs and throw the country into a double-dip recession.”

At the root of today’s joblessness is that Corporate America has been siphoning off all the productivity gains income for itself, not sharing it with employees via wage boosts, and the ever-expanding trillions being spent on war, which has lavished record profits on “defense” contractors. ABC News reported Aug. 6, 2010, “ For millions of working Americans, the phenomenon economists call ‘median wage stagnation’ has become a way of life. For decades, their annual incomes have remained virtually the same, leaving many just a paycheck or two from the street.” By way of example, the network interviewed one woman who said she hadn’t gotten a pay raise in 13 years. Real earnings, The Brookings Institution reported, dropped 1.1 percent in the past year. Numerous studies also show so-called defense spending doesn’t begin to boost the economy as the same money spent, say, on rebuilding infrastructure or plowed into the domestic economy.

But “defense” spending does especially benefit one small class of Americans—the CEOs of the firms turning out the war machines. As financial authority Walter Brush wrote: At General Dynamics, of Falls Church, Va., between 2002 and 2006, CEO Nicholas Chabraja pocketed $97.9 million as sales in that period rose 76%, with significant help from Defense Department spending. Over the same period, Brush added, the CEOs of other leading “defense” CEOs also fared well. Their take (and this is for individuals, mind you) was as follows: Halliburton, $79 million; Lockheed Martin, $65 million; Boeing, $56 million; Alliant Techsystems, $47 million; Engineered Support Systems, $45 million; and Oshkosh Truck, $44 million.

The Economic Policy Institute reported, Herbert wrote, “the richest 10 percent of Americans received an unconscionable 100 percent of the average income growth in the years 2000 to 2007” so that in 2009 the richest 5 percent claimed 65.5 percent of the nation’s wealth. “The overwhelming majority, the bottom 80 percent, collectively held just 12.8 percent.” Much of this has to do with corporations refusing to grant wage increases and pay bonuses to reward the workers who brought their record profits about. Corporations have achieved this, in part, by ignoring labor laws that give workers a chance to organize—by firing pro-union employees, for example. At the same time they have abandoned the workers who built their companies by closing plants in the U.S. and moving overseas. Like Halliburton, they relocate their headquarters’ overseas to skirt tax laws. (Dubai has no corporate income tax.) Like General Electric, their accountants know how to evade paying the Treasury a dime in taxes even when the firm racks up $14-billion in profits.

Writing in the April 4th The Nation, William Mitchell, director of the Centre of Full Employment and Equity at the University of Newcastle, Australia, pointed out, “With real wages lagging well behind productivity growth, a new way had to be found to keep workers consuming,” and that way was “financial engineering,” a euphemism for the credit card binge that “pushed ever increasing debt onto the household sector.” Rather than have people borrow to lay their hands on cash, Mitchell advocates “an open-ended public employment program—a Job Guarantee—that offers a job at a living (minimum) wage to anyone who wants to work but cannot find employment.” He adds, “These jobs would ‘hire off the bottom,’ in the sense that minimum wages are not in competition with the market-sector wage structure.”

Mitchell reminds that in the early days of the current financial crisis, “there were no questions asked” when the government “instantly provided billions for the banks.” In short, instead of shedding government jobs as Wisconsin and other states and cities are are doing — cutting vital services to boot—governments should be creating jobs. And why not? The tax dollars for the task could easily come from those at the top of the economic pyramid not paying their fair share. There may even be some Tea Party boosters who could use a job, even one created via liberal economic policies. Instead of waging war on Libya, Afghanistan, Pakistan, ad nauseum, when will President Obama put the real needs of the American people first?

About the Writer: Sherwood Ross was formerly employed as News Director for the National Urban League and has been a consultant to the Communication Workers of America. He now runs a public relations firm for “good causes.” Reach him at [email protected]