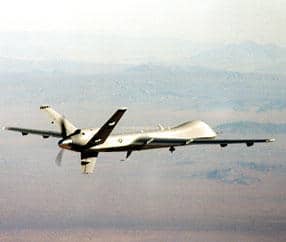 Since the Vietnam war military tactics have been transformed into something even more sinister and horrendous.

Despite superior firepower and the illegal use of the deadly defoliant agent orange and napalm in Vietnam, the US still suffered serious losses to ground troops and eventually lost the war.

It was the steady stream of body bags returning home that eventually turned public opinion, fuelled the anti-war movement and brought about a change in government policy.

Since then governments and the military have learned their lesson – albeit the wrong one.

Rather than looking for non-military solutions to seemingly intractable political problems, they are developing a means of waging wars without loss of their own soldiers’ lives.

The present criminal escapade in Libya is just the latest example of waging war without endangering the lives of aggressor troops.

But an even more insidious expression of this is the use of robot weaponry.

The US, led by the CIA’s special activities division, has been waging an undeclared war in north-west Pakistan since 2004.

The strikes are mostly carried out by unmanned aerial vehicles (UAVs) operated remotely from Creech Air Force Base in the US, and these have increased substantially under Barack Obama’s presidency.

This “drone war” has become a tactic of choice for the United States.

Pakistan’s government, while publicly condemning the attacks, has secretly shared intelligence with the US and allows drones to operate from Shamsi Airfield in Pakistan.

Over the past year and a half, the US has stepped up drone strikes against militants in Pakistan.

The CIA has been widely credited with running a number of these missions.

Government officials have refused to speak in public about drone attacks and they routinely rebuff any attempt to probe into the CIA’s operations.

“I’m not going to comment on any particular tactic or technology,” Secretary of State Hillary Clinton recently told a group of Pakistani journalists.

US military drones began flying over Pakistan soon after the invasion of Afghanistan in 2001.

These missions are remotely flown by US pilots at Creech base, Nevada, and the footage is shared with the Pakistani government.

Some of those drones take off from Jalalabad, others from within Pakistan itself, and, according to the New York Times, those aircraft are operated out of CIA headquarters in Langley, Virginia.

The CIA uses these drones to conduct its own strike and surveillance missions. Wired magazine contributing editor Noah Shachtman describes how the drone operation works.

“Those munitions are then unleashed during strikes on suspected militants, targeted by a combination of informants’ tips, radio intercepts and overhead surveillance.

“Al-Qaida claims that cheap and small infrared beacons are provided to local agents, who use them to signal for drones to attack.”

These CIA missions comprise the bulk of drone flights over Pakistan.

And the military has encouraged the notion that operating these unmanned aircraft is the spy agency’s job.

“The overwhelming bulk of all activity in Afghanistan since the first US forces went in have been basically under the control of the central command,” then defence secretary Donald Rumsfeld told reporters in 2002.

“An exception has been the armed Predators, which are CIA-operated.”

But while the CIA’s drone flights are kept largely separate from the US military’s efforts in Afghanistan, there is overlap between the two.

No matter who controls the mission, some airmen at the undisclosed base are aware of every flight.

The officers there at the Combined Air and Space Operations Centre need to have a basic idea of where every aircraft is, to keep them from crashing into one another.

In Afghanistan, air strikes have been strictly limited, to minimise casualties.

In Pakistan the attacks are far more deadly.

According to an analysis of public reports by the New America Foundation, 82 US drone attacks in Pakistan since 2006 “have killed between 750 and 1,000 people.”

Up to 320 of those may have been civilians. But because the Pakistani government bans reporters and aid organisations from the tribal lands, where the majority of drone strikes have been reported, no-one can be certain how many have really been killed by these unmanned planes.

Not long ago the US rebuked Israel for its “targeted killings” of so-called Palestinian terrorists. Now, the US is pursuing similar tactics.

“The things we were complaining about from Israel a few years ago we now embrace,” Georgetown University law centre Professor Gary Solis told the New Yorker.

A week before US terror attacks of September 11 2001, then CIA chief George Tenet argued that it would be “a terrible mistake” for the director of Central Intelligence to fire a weapon like the Predator.

Seven years later in 2009, CIA director Leon Panetta said that drones are “the only game in town in terms of confronting or trying to disrupt the al-Qaida leadership.”

Jane Mayer, writing in the New Yorker, describes in chilling detail how the drones operate.

“On August 5, officials at the Central Intelligence Agency in Langley, Virginia, watched a live video feed relaying close-up footage of one of the most wanted terrorists in Pakistan.

“Baitullah Mehsud, the leader of the Taliban in Pakistan, could be seen reclining on the rooftop of his father-in-law’s house in Zanghara in south Waziristan.

“It was a hot summer night and he was joined outside by his wife and his uncle, a medic. At one point, the remarkably crisp images showed that Mehsud, who suffered from diabetes and a kidney ailment, was receiving an intravenous drip.

“The video was being captured by the infrared camera of a Predator drone, a remotely controlled, unmanned plane that had been hovering undetected two miles or so above the house.

“Pakistan’s Interior Minister A Rehman Malik told me recently that Mehsud was resting on his back.

“He explained that the Predator’s targeters could see Mehsud’s entire body, not just the top of his head.

“Malik, who watched the videotape later, said: ‘We used to see James Bond movies where he talked into his shoe or his watch. We thought it was a fairy tale. But this was fact!’

“The image remained just as stable when the CIA remotely launched two Hellfire missiles from the Predator. Authorities watched the fiery blast in real time.

“After the dust cloud dissipated, all that remained of Mehsud was a detached torso. Eleven others died – his wife, his father-in-law, his mother-in-law, a lieutenant and seven bodyguards.”

Former CIA lawyer Vicki Divoll, who now teaches at the US Naval Academy in Annapolis, observes cynically: “People are a lot more comfortable with a Predator strike that kills many people than with a throat-slitting that kills one. But mechanised killing is still killing.”

The military’s version, which is publicly acknowledged and operates in Afghanistan and Iraq, targeting “enemies” of US troops stationed there.

As such, it is an extension of conventional warfare.

The CIA’s programme is aimed at terror suspects around the world, including countries where US troops are not based.

It was initiated by the Bush administration and, according to Juan Zarate, a counter-terrorism adviser in the Bush White House, Obama has left in place virtually all the key personnel.

The programme is classified as covert and the intelligence agency declines to provide any information to the public about where it operates, how it selects targets, who is in charge or how many people have been killed.

Since then, the CIA bombardments have continued at a rapid pace.

According to a recently completed study by the New America Foundation, the number of drone strikes has risen dramatically since Obama became president.

During his first nine-and-a-half months in office, he authorised as many CIA aerial attacks in Pakistan as Bush did in his final three years in office.

The study’s authors, Peter Bergen and Katherine Tiedemann, report that the Obama administration has sanctioned at least 41 CIA missile strikes in Pakistan since taking office – a rate of approximately one bombing a week.

So far this year, various estimates suggest that the CIA attacks have killed between 326 and 538 people.

Many of the victims have undoubtedly been innocent bystanders, including children.

General Atomics Aeronautical Systems, the defence contractor that manufactures the Predator and its more heavily armed sibling, the Reaper, can barely keep up with the government’s demand.

The CIA will not divulge how many drones it operates.

The government plans to commission hundreds more, including new generations of tiny “nano” drones, which can fly after their prey like a killer bee through an open window.

It’s easy to understand the appeal of a “push-button” approach to fighting al-Qaida, but the embrace of the Predator programme has occurred with remarkably little public discussion, given that it represents a radically new and geographically unbounded use of state-sanctioned lethal force.

And there is no visible system of accountability in place, despite the fact that the agency has killed many civilians inside a politically fragile, nuclear-armed country with which the US is not at war.

Those who’ve seen an air strike live on a monitor describe it as both awe-inspiring and horrifying.

“You could see these little figures scurrying and the explosion going off. And when the smoke cleared there was just rubble and charred stuff,” a former CIA officer says of one attack.

Human beings running for cover are such a common sight that they have inspired a slang term – “squirters.”

PW Singer in his book Wired For War says that “an amazing revolution is taking place on the battlefield, starting to change not just how wars are fought but also the politics, economics, laws and ethics that surround war itself.”

Already in Iraq the number of unmanned systems on the ground has gone from zero to 12,000 in the last five years.

“But this,” Singer says, “is only the start. Military officers quietly acknowledge that new prototypes will soon make human fighter pilots obsolete, while the Pentagon researches tiny robots the size of flies to carry out reconnaissance work now handled by elite special forces troops.”

Many US lawyers who have looked at the country’s drone programme in Pakistan believe that it meets basic legal criteria.

But they are nevertheless troubled, as the US government keeps broadening the definition of acceptable high-value targets.