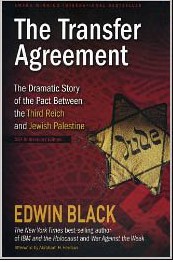 THE TRANSFER AGREEMENT – a book by Edwin Black, 1984

This book explains How ZIONISTS used the Transfer Agreement to allow Hitler to succeed in War and the proceed with the Holocaust of Jews by the millions.

The agreement transferred 60,000 Jews and $100 million dollars to Palestine on the condition that Zionist organizations would halt their economic boycott of NAZI Germany – a strategy that threatened to openly topple Hitler’s government, then only in his first year of power.

[youtube 0QRA2lpAvWc]
Greedy and ideological Zionists contributed to the growth of the Third Reich via the so-called “Transfer Agreement” – a business arrangement to transfer German Jews to Palestine. In return, German exports would be bought through Zionist entities to ensure the economic growth and wealth of Palestine. Most significant is the success of the 18th Zionist Congress to go against the international boycott movement by suppressing the Revisionists and strong-arming them into abandoning their ideology.

If the boycott had prevailed, Germany may not even exist today and the Holocaust would have never happened.

The facts are clear that Zionists made Hitler’s 3rd Reich possible and ultimately spawned the Zio-Fascist and terrorist State that Israel has now become.

Israeli Zionist leaders continue to indulge in the persecution of Jews by falsely claiming that Zionism is a goal of Judaism. It’s time to make a clear distinction between Judaism and Zionism, aka: Zio-Fascism.

Newly released documents disclose how American Fascists empowered Hitler and guaranteed his success propr to WWII. One of the most notable is Prescott Bush of thethree generations of the Bush Crime Family . Prescott Bush was involved in treason in attempted coup to overthrow the US and later supported Nazi Germany and providing deadly sarin gas to Hitler’s death camps.

Unbelievably, despite multiple, treasonous crimes against the state, Prescott Bush was ultimately elected to the US Senate. Meanwhile Prescott’s son, George HW Bush was involved in the new “CIA” and is now implicated with new evidence in the assassination of JFK.