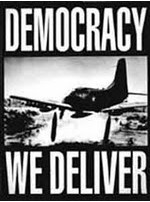 Another Day Another Self Inflicted Calamity By US Empire Delivering Democracy

Self inflicted morose and despised crumbling US empire ratchets up domestic and global calamity in a race with the 24 hour clock to the dark abyss and bottom of collapse. Party line belligerent bureaucratic apparatus parrots neocon domestic and global failures. Instantaneously delivers Democracy 24/7/365 to the world. A despised global empire that refuses to let a single 24 hour day pass without generating great calamity and chaos throughout the world.  An extreme psychotic misery that empire’s failure equates to immortality and greatness.

A ticking time bomb of empire from seconds to minutes to hours of despicable narcissistic and self induced calamities. Confirmed by Alan Hart’s article in Veterans today: “Millions at home, tens of millions in Russia, Europe and around the world have been destroyed by the flood of narcotics distributed with deadly efficiency by a combination of rogue military and intelligence operations and the contracting firms we payed to protect us.” Posted by Alan Hart VT.

NYT Opinion: “There is a much better option the American A-10 and AC-130 aircraft used earlier in the Libya fighting and still on standby status. President Obama should authorize these planes to fly again under NATO command. Unlike the high flying supersonic French and British jets now carrying the main burden of the air war, these American planes can fly slow enough and low enough to let them see and target Colonel Qaddafi’s weapons without unduly endangering nearby populations.” NYT Editorial Opinion 7 April 2011.

Commencing the 21st Century’s second decade of brutal wars and occupations. Delivering hypocrisy death and destruction instead of democracy. Mr. Obama signs a 40 billion dollar budget reduction to US social services. Tells 1.3 million veterans they must share the burden. Simultaneously, welfare bailout calamity increases exponentially for the ‘too big to fail cartels,’ and military satrap war criminals to confiscate and rob the labor assets, and property of the US citizenry.

911 [Certainly Not News] second false flag put on hold. Subsequently, using nature’s fury in Japan as a backdrop event rather than the false narrative, 19 Muslims with box cutters ‘did it’ alibi. 911/CNN has been shelved temporarily.

Instantaneously, GE Electric Corp, CIA, and US corrupt apparatus the advocates for more chaos and calamity claim “no reason to worry.” Read “How Nuclear radiation causes cancer” by Cancer Risk Factors. The EPA will just apply the total radiation toxin harm to humans upward. Thereby allowing the increase of poison toxin and cancer to inflict the entire 320 million US citizenry. GE states verbatim “definitely should not have any concern and continue to go about their daily chores” in despised empire. This is “drop dead” ideological contempt by high officials attempt to suppress calamity, war, death, destruction, and chaos daily.

All Nuclear radiation results in cancer. So then we can expect to hear singular preparations for future negative events and emergencies to include the primary use of “Duct Tape and Plastic.”While duct tape and plastic for window protection is a joke perpetuated by the despised empire of   gangbanksters and warmongers unleashing thousands of tons of DU cancer isotopes. Instead they head directly to their gold lined underground bunkers. Resulting in empire’s trajectory of planned self implosion of the planet with radiation and [DU] depleted uranium. Accomplishment is completed as they scurry for the safety of fortified underground bunker mentality.

Self induced calamity and collapse experts NWO lacking any common sense or simple core fundamental logic dismisses the factual record of 2.5 billion years for the earth to dissipate radiological cancer producing isotopes. Do they have one regret? Not on your irradiated life!  Their false superiority shadowing extreme sociopath complexes and narcissistic self induced calamities dictates that they can somehow outsmart and rig the percentages of radiological isotopes and outlive [DU] cancer toxins while continuing to deliver phony democracy to themselves underground. This is their concept of immortality and greatness.