“I have seen my brother Vik’s body and his death certificate, but Vik is not dead.”

(SALEM / GAZA) – Italian Journalist Vittorio Arrigoni’s body has reportedly been found in Gaza. He was killed by a small faction of religious radicals according to reports.

Gaza Youth Breaks Out (GYBO) wrote: “While Hamas forces were intensely searching Doghmosh area to find them, abductors tried to leave, when two of them were caught by Hamas. A third, who was with Vittorio, was given a signal to kill him. We lost a brother.”

Al Jazeera reports that Hamas police stormed an apartment in Gaza City belonging to a member of the group that released a video of the activist. A police officer said four people were arrested in another location, in connection with the abduction.

Those on the ground in this embattled region of Palestine had held out hope along with the rest of us, that he would be returned alive.

The Hamas government had earlier made statements that led supporters to believe that Vik Arrigoni would be returned alive.

People in Gaza have a voice because of hard working dedicated peace activists like Vik Arrigoni. Beyond the overly religious fanatical Salafist radicals, the only detractors this man had were Israeli Zionists who wished for his death for years. 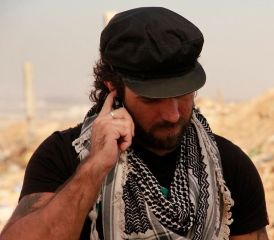 The Ministry of Interior said that since the arrival of the news of the abduction of Italian Solidarity Activist Vittorio, the security agency Balastnfar launched a full search and investigation.

This resulted in contact with one member of the group who disclosed the location where Vittorio was being held. She led the security services toward the place where he was being held where they found that the victim, Vittorio, had “been killed hours ago in an ugly way” (according to the forensic report).

Faced with this situation, we affirmed the following:

First: the Palestinian government condemns the heinous crime that does not reflect our values, our religion and our customs and traditions, and confirms that it will hunt down the rest of the members of the group and will implement the law against them.

Secondly: We emphasize that this crime does not reflect the true state of the atmosphere of security and order in the Gaza Strip, does not imply a retreat, and will remain the Government keen to promote stability, security and safety as this incident is the first of its kind in years.

Third: The initial data indicate the intention of the kidnappers was Murder. As he was murdered shortly after he was kidnapped.

Four: The motives behind this crime, though it seems intellectually certain, but it demonstrates the hands are still plotting against the Palestinian people in Gaza, and want to undermine the security and steadfastness, and achieve a state of terror for the movement of people of the world’s solidarity with the Gaza Strip, especially the enemy Zionist looking at ways to prevent the fleet of freedom that was after the second campaign of international solidarity and the impact of a role in loosening the embargo imposed five years ago.

Fifth: The Ministry emphasizes the brothers in the media must pay attention to any rumor or news that is not accurate with respect to this crime, and to rely on official information from the Ministry.

You will note in the video below that Ken O’Keefe, our writer and diehard activist friend in Gaza, does not believe or at least did not, that any Palestinian patriot could be responsible for Vik’s death.

Indeed, it is hard to imagine anyone doing this to a man who was so well loved and respected. It is exceedingly clear that everything is out of sync.

The perpetrators of this crime Ken suggests, were Zionist agents of Israel. This is the obvious relentless enemy of the Palestinian people, with frequent strikes on civilian targets in Gaza from U.S. made fighter jets and drones.

Just a few days ago, on 4 April 2011, Filmmaker Juliano Mer-Khamis was Murdered in Jenin, the scene of severe fighting during the Second Intifada.

Juilano’s mother Arna had famously provided a haven for the Palestinian youth in Jenin. She was Jewish, her husband, Juliano’s father, was a Palestinian Christian.

Juliano was murdered in front of his wife by masked men who were immediately assumed to be Palestinian.

In the bigger picture, nothing was gained for Palestinians in any way by either man’s death.

VIDEO BY KEN O’KEEFE, IN RESPONSE:

His life’s work is his legacy. It surpassed all boundaries. Vittorio Arrigoni has helped an endless list of Palestinian people over the years and his work has led to a great deal of exposure of the treatment of Palestinians under the Israeli occupation.

As the world moves toward a real understanding of the reality of Gaza; Israeli snipers, constant fear and attacks on civilians from the Israeli military, Vittorio Arrigoni was a bright light. He was close to our friend and fellow writer Ken O’Keefe, and loved by thousands, perhaps millions. The idea that he was taken by a radical faction and killed in Gaza, if this is true, is simply horrifying. Never has a more grave mistake been made.

He was there when the first Freedom Flotilla boat reached Gaza. He has been an ally and key friend of the most successful humanitarian activists and his beliefs and words in action inspired many to become involved with the International Solidarity Movement which he started.

According to the Free Gaza Movement,

“He was aboard the siege-breaking voyage in 2008 with the Free Gaza Movement and was incarcerated in Israeli prisons several times. He was in Gaza throughout Israel’s brutal assault (Operation Cast Lead), assisting medics and reporting to the world what Israel was doing to the Palestinian people. He has been arrested numerous times by Israeli forces for his participation in Palestinian non-violent resistance in the West Bank and Gaza. His last arrest and deportation from the area was a result of the Israeli confiscation of Palestinian fishing vessels in Gazan territorial waters.” An earlier report from al-Arabiya stated that Vittorio’s body was found in the al-Saftwai area.

This is a group that reportedly looks down on Hamas for not being sufficiently religious and they are known for a rejection of western influence. What they have done if this is true, is robbed the life of one of the greatest people dedicating his life to seeing Gaza become free.

I was in contact with a person who worked closely with Vittorio today and she told me the only word is ‘anguish’. The only hope now is that people become all the more familiar with this great man who did so much for so many.

The world lost a great spokesman and activist today, but his message is not lost.

Articles by Vittorio on Salem-News.com:

Tim King is a former U.S. Marine with twenty years of experience on the west coast as a television news producer, photojournalist, reporter and assignment editor. In addition to his role as a war correspondent, this Los Angeles native serves as Salem-News.com’s Executive News Editor.

Bonnie King has been with Salem-News.com since August ’04. Bonnie has a wide ranging media background and in her career she has served in a number of positions in the broadcast industry; TV Production Manager at KVWB (Las Vegas WB) and Producer/Director for the TV series “Hot Wheels in Las Vegas”, TV Promotion Director for KYMA (NBC), and KFBT (Ind.), Asst. Marketing Director (SUPERSHOPPER MAGAZINE), Director/Co-Host (Coast Entertainment Show), Radio Promotion Director (KBCH/KCRF), and NIE/Circulation Sales Manager (STATESMAN JOURNAL NEWSPAPER).