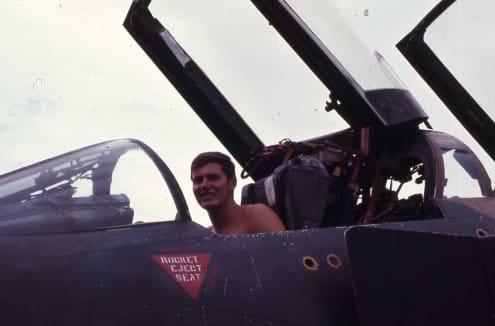 More and more we are being scrutinized in one way or another by the upper command and it’s beginning to feel like the battle is between headquarters and us, and not the enemy. Outside inspection teams have been brought in to review our loading procedures and with them came an attitude of superiority. Okay, I admit that we took some short cuts but I also felt we knew what we were doing and our mission was to get the planes turned around as quickly as possible to support our buddies on the front lines. I was a number two man (cockpit man) on a four man weapons loading team. My job was to simulate the pilot’s job of releasing the various weapons like the bombs, rockets and gun firing from the cockpit while the guys on the ground tested to make sure the voltage to release these weapons got to the proper destinations. I know it takes eight pins placed in an F-4 ejection seat to make it totally safe but I also know it only takes a few to keep me from being splattered against the inside roof of the concrete revetment. We weren’t the only ones taking short cuts and risks. The pilots, in coordination with their maintenance

crew chiefs, flew planes with failing equipment. Those in charge didn’t seem to care how we got the mission done until now. Was their war getting out of control?

It’s been raining for the last two days now.  I was taking a bomb loader over to have it fixed because the side frame was bent and wouldn’t retract. A couple of lifers jumped all over me for driving the loader with the frame out. They didn’t even let me explain that I was taking it to be fixed and that it wouldn’t retract. All they have is simple minds with nothing else to do. On top of all this our crew was decertified yesterday. They said we were unsafe. Yet our crew was in first to be the crew of the month.

For some reason I didn’t write home about what came next. We joined forces with the maintenance crews in protest of the heavy handed, better than thou, attitude of the upper echelon. My new weapons loading crew chief, a young lifer, challenged the commander when we didn’t receive the proper loading equipment. He followed the check list verbatim and reminded the commander that the check list was signed by the Secretary of the Air Force. The commander didn’t know what to do. Planes were grounded (Red X’d) by the maintenance crew chiefs because parts needed to be replaced and weren’t available, so missions were missed because we followed the rules as established by the authority. Within days a Four Star General’s car showed up in front of operation headquarters. The shit hit the fan and later that afternoon we were called into the shop by the OIC (Officer in Charge) and told to continue our work as before but to please be safe.

While we were banning together and protesting the rules of the establishment the stateside protest slogans were making their way to Vietnam. There was a new air of enthusiasm amongst the maintenance and loading crews that was propelling us to join forces for a common goal. Meanwhile my feelings about the war were emerging in my artistic talent for painting. We also needed to start locking up our stuff so we acquired a wooden fuse box, hinged the top of the box, used bomb lanyards to create a cable stop / table and mounted it on the wall. This fuse box became my canvas to express my feelings about the war.

Well today’s my day off. I got some poster paints and paint brushes at the hobby shop. I painted some signs on the front of our wooden cabinet. One’s a peace sign and the other one is a flower drawn in stick design and it says “War Is Not Healthy for Children and Other Living Things. I’m doing another one right now that says “Suppose they Gave a War and Nobody Came”. It really surprised me that I still had the patience and talent for painting. Everyone has been telling me how great my paintings look.

You never know what the day might bring in a war zone. A 2,000 lb. bomb can make a pretty big hole in the ground when dropped by a plane but the devastation it can make if it were to go off while sitting on a bomb trailer with another 2,000 lb. bomb right next to it would be unbelievable. The officer standing beside me shared my concern but apparently knew nothing about weapons when he suggested we move back a few feet. We could have moved back 100 feet and we would still be well within the kill zone. For some reason I didn’t care all that much. The excitement of watching the bomb being de-armed was overwhelming.

We had a little excitement around here yesterday. A crew went to load two 2,000 lb. bombs when they noticed one had an armed tail fuse. What happened is another crew down-loaded it and forgot to take out the tail fuse. When they pulled the arming wire the vain spun and armed it. They didn’t notice it so the bomb has been to the bomb dump and back to the flightline armed. I guess I’ll go to the dentist tomorrow. I have to have one of my wisdom teeth pulled. I can’t brush back that far anyway. I guess that’s why they pull them. I’m trying to catch up on my letter writing later, I get behind when I get in a slump.

In the states I was threatened with an Article 15 (punishment at the sole direction of the First Sgt.) for going on sick call when I could have made an appointment. But over here I don’t seem to really care about punishment. They can’t do much more to me than I have already done to myself by volunteering for Vietnam.

I went ahead and had my tooth pulled today. They were going to pull it out on the 25th but it bothered me so I went in on sick call today. I didn’t even know it was out. It came out so easy it’s a wonder it didn’t fall out. The next two are going to be a bit rougher. They won’t be coming up anymore. He said if I let them go there would be a good chance of infection. He said I could wait until I get back to the states but I figure I might as well get it over with. I got duty excuse so I am back at the barracks.

When the VC rockets aren’t hitting the base they are hitting downtown. The word around base was that the rockets are set up on timers and the VC are long gone by the time the rockets are launched. So when the big guns starting unloading rounds into the surrounding hills and valleys there is no reassurance  that they are actually killing any VC. The barracks shake with each shell that is fired from the canons and the sound is deafening. The cannons have now become more annoying than the rocket attacks.

We got another rocket attack early this morning. I heard one rocket killed 7 people and injured 19 when it hit a home downtown. I got two letters from you today. I got still another award besides the one that you read about in the paper and that’s a Missleman’s badge. I tried to do some painting last night but every time I’d start to paint a straight line they’d shoot off that big gun. I saw a couple of barrels for that gun yesterday on the back of a semi-flatbed trailer. The barrels extended 10 to 12 feet beyond the end of the trailer.

I was noting on the calendar that I have 217 days to go. As of Thursday I’ll have been here 5 months. Sometimes seem to go pretty fast then all of a sudden it seems to stop.

I’ve been here five months and without any hint of open locker inspections. So what is going on now? The consensus is that the command leaders are trying to get even with us after our show down that happened earlier in the month.

This morning started a little different. A captain woke me up saying that this was a shake down and for me to open my locker. There was no mention as to what they were looking for. Probably just more harassment.

It’s raining again today. We had to walk through 4 inch deep water to load a plane. I carry my wallet and other important things in a plastic sack. We got off early tonight so I did my wash. I’m rinsing my clothes about three times to make sure I get any soap out of them. Well I’ve passed the 5 month mark. 212 days left to go. 12 more days and I will be in the one hundreds. It won’t be long now.

The Air Force finally caught up on my back pay. Hell, it’s only been five months. A month or so ago I ordered a tape deck and had it shipped to Danang. But now that I’ve got some bucks I can do some serious planning as to which pieces of stereo equipment I want to order and shipped home. I’ve got to make sure I order an 8-track tape recorder so I create my own tunes for cruising in that ’67 SS Chevelle that is waiting for me when I get home.

I’m at work right now. I was just trying to see if I couldn’t do some writing between loads. I got paid $482 this month. That is for buck Sgt. over two years and all my back pay I was owed. I’ll be able to order all the rest of my stereo equipment and still have $254 left. I have the day off tomorrow and hope to be able to sleep in if it is cool. What usually wakes me up in the morning is when I start sweating. I didn’t think I would have time to finish this letter at work. They’re trying to push our crew at work. We have a new supervisor at work and he is a really great guy. The lieutenant accused him of giving our crew the most loads. He told the lieutenant that who ever gets load crew of the month is going to have to load for MSET, an evaluation team, and that we were the only crew capable of doing it. All the line chiefs stuck up for us too. My bunkmate just came back from playing cards. He’s been playing cards since we got off at midnight and it is 10:00 in the morning. Well I have to go to chow and then the BX.