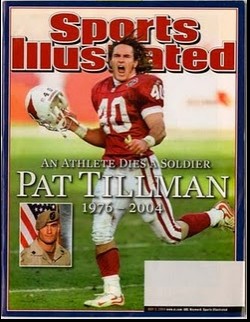 Today is the seventh anniversary of Pat Tillman’s assassination in Afghanistan. On April 22, 2004 Tillman and several other Army Rangers were given an odd order to split their motorized squad and proceed toward a village called Magarah. The original mission was to recover a broken-down Humvee from a rocky and almost impassable trail through a steep gorge. The Humvee was being towed by a local “jinga” truck, rather than by one of the working Humvees. Tillman and the others got to the village before the guys with the towed Humvee and were waiting for them when three Afghan kids fired an RPG, with an effective range of 250 yards, from 800 yards. It hit on the wall of the gorge and made some noise and loosened up some dirt and rocks. But, no harm done. Nevertheless, the vaunted Rangers lost control of themselves and fired their arsenal of a .50 caliber Browning, 40mm grenade machine gun, .30 caliber machine guns and .223 caliber machine guns plus their small .223 rifles, called M-4s. They fired until they were out of ammo and had to get into their reserve ammo supply.

Tillman and the other guys were watching this show from above. Tillman’s sergeant, Matthew Weeks, ordered him and Bryan O’Neal and an Afghan named Thani to go down on foot closer to the road, which they did. The lead Humvee came within view of Tillman and from a range of about one hundred feet, opened up on him and the two others, killing the Afghan and wounding Tillman after he waved his arms at them not to shoot. They dove behind a couple of one-foot high rocks and O’Neal asked if he was okay. One of Tillman’s legs was severely wounded. He threw a purple smoke grenade to show they were Americans and kept yelling at the nearby Humvee shooters. Both Tillman and O’Neal waved their arms at the Humvee. The Rangers in the Humvees stopped shooting for a minute. Tillman and O’Neal thought it was safe to show themselves.

Tillman identified himself loudly, saying “Hold your fire! I’m Pat f****** Tillman!” Specialist Trevor Alders opened up again with his .223 machine gun and hit Pat Tillman from about one hundred feet away. Now, both Tillman and O’Neal were in the same uniforms as the other Rangers, wearing the distinctive Kevlar helmets, carrying the same M-4 rifles. The Humvee guys knew that the other guys were up ahead and still they did this.

Here’s where it gets strange. The autopsy photos supposedly show three .223 holes in Tillman’s forehead, in a two- to three-inch group. I haven’t seen the photos. It is not possible to shoot a three-inch group into a guy’s forehead with a machine gun from one hundred feet, for several reasons. Number one, high-power rounds do not follow each other single file into the target; they veer off a little from the recoil of the one just before. Yes, once you get the gun settled down from the first few rounds, you can bring it to bear pretty closely but not that closely. A look at the rock next to Tillman’s position with about twenty hits on it shows the shotgun-like spread resulting from the weapons jumping around slightly. A hundred foot range allows a pretty good spread from any machine gun.

Number two, the Kevlar helmet covers the forehead and generally stops the .223 round. Number three, the guy drops from the first hit and you can’t follow him down to put the second and third rounds next to the first hole. Number four, a .223 round to the forehead doesn’t leave any forehead for the next two rounds to put holes in. The only way you can get a group of three .223 rifle bullets so tight is to kill the guy with the first shot and then shoot him again twice more when you get next to him. But three high-power holes in a tight little group? No way.

Now, the story has changed a little since the original lies were told. Now it’s said that the back of his head was missing, which would make sense after just one .223 hit him in the front, except for that helmet. Jack Kennedy was apparently hit with a .223 round from a Remington XP-100 and the back of his head was missing, too. But it’s come out that SPC O’Neal has said that all that was left of Tillman’s head was a flap of face-skin, which makes sense if three .223 rounds hit him in the head, so devastating is any high-power rifle round. Except for the helmet.

I didn’t know about the facial devastation until today. Like everyone else interested in this, I’d read that Tillman’s head looked pretty normal except for the three .223 bullet holes in his forehead, which meant only one thing: a low-power .22 pistol. The report that almost all of his head was gone indicates that he was not hit by Trevor Alders and his machine gun from a hundred feet but by someone else much closer with his M-4 carbine. The M-4 is just an M-16 with a short barrel and collapsible stock. The pathologist reported that the range of the shots was maybe five feet, which definitely makes it murder. How do you shoot holes in a guy’s forehead when he’s wearing a Kevlar helmet?

Stan Goff, a Ranger veteran writing for Counterpunch, assures us that Tillman was not assassinated but just killed by bad fire control, that the bizarre performance of the Rangers that day could not have been contrived to culminate in Tillman’s murder. He doesn’t explain how Pat f****** Tillman could be mistaken for a bad guy wearing what he was wearing, yelling and waving his arms, popping purple smoke in daylight, diving for cover behind a low rock, not shooting at anyone.

It didn’t have to happen that particular day. It just had to happen sometime when there were guns going off to make it “a mistake.” It was as good a day as any to kill Pat Tillman, because he had to be killed.

Tillman had naively made contact with the CIA’s Noam Chomsky to discuss his plans to reveal what he knew about the lies of Bush, Cheney and Rumsfeld in the War on Terror. He was apparently also angry about the US Army’s support of the Afghan opium trade, started up by the army after the Taliban had eradicated it one hundred percent during their four-year reign. The US Army authorized the Northern Alliance to resume poppy production, according to Fox News shortly after we invaded Afghanistan.

The thing was, if you’ve forgotten, Pat Tillman had forsaken his multi-million dollar pro-football contract with the Arizona Cardinals to join his brother Kevin in the Army Rangers to hunt down the CIA’s Osama bin Laden directly after the attack on the World Trade Center in late 2001. Never mind that Osama had immediately denied any involvement in the massacre and had in addition pointed to the US government and the Mossad, the latter’s role now confirmed by the revelations of Dimitri Khalezov.

Pat Tillman was probably the greatest recruiting asset that the Neo-Cons had, until they sent him and Kevin from Afghanistan to Iraq in ‘03. Tillman became quite bitter and outspoken about the invasion of Iraq, figuring Saddam Hussein had nothing to do with 9/11. So they were sent back to Afghanistan, where they discovered the opium trade being protected and supported by the US Army. Now, they’re both pretty upset. Pat Tillman went from the Neo-Con dream to nightmare and needed to be shut up before he could tell America about the lies of its leaders.

Ironically, the Tillman brothers were part of the security detail of the joint services “rescue” of Jessica Lynch from an Iraqi hospital in April ’03. The Lynch saga was clumsy neo-con propaganda, a totally fictional tale of non-existent heroics and sexual assault following a vehicle accident. The truth was that Iraqi doctors had treated Lynch properly and well, saving her life, and repeatedly notifying the Americans of her location and condition, urging them to come get her. The rescue was as phony as the legend cooked up by the DC liars. Lynch did perform heroically when she revealed the lies that had been told about her. She’d been knocked unconscious in the accident and never shot or stabbed anyone nor pulled grenade pins with her teeth, etc., etc.

The death of Pat Tillman got the same heroic legend as Jessica Lynch got, with the first version being that he was shot by the Taliban while getting out of his Humvee. The second version, told to the family about the time of the funeral, was that he was shot while leading a charge up the hill toward the enemy. The third lie was that it was “friendly fire.” Friendly fire refers to the accidental killing of your own guys, which happens all the time, since weapons training regarding safety and fire control are virtually non-existent in the military. Such things have to be trained from childhood, over years.

Mary Tillman, Pat’s mother, wrote a good book about all this in 2008 in which she suggested that her son was deliberately murdered by his fellow Rangers, reserving most of her anger for General Stanley McChrystal, who led the lying coverup of the murder. Since then, she appears to have dropped the charge of assassination, for what reason is not clear. But there can be no doubt that the Rangers shot Pat Tillman deliberately and with malice on April 22, 2004. They shot and wounded him first and then waited while he popped purple smoke to let them know he was “friendly.” Then they started shooting again and didn’t stop until he was dead. The army gave him a Mafia funeral with the same Mafia sanctimony that Johnny Torrio sent to Dion O’Bannion’s funeral. The family only found out weeks later that it wasn’t enemy fire that killed Pat. It took a little longer to realize it wasn’t friendly fire, either.