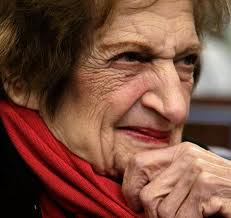 I am the founder of one of 100 organizations who have endorsed Move Over AIPAC, but I didn’t commit to attend until I learned you were going to be speaking and I began to dream of 15 minutes with you.

However, my dream died when I learned that Ms. Thomas has now declined to take part in the Move Over AIPAC conference fearing she was becoming the focus and said “I am delighted that people are coming together for this gathering and I want to make sure that the focus stays on AIPAC and U.S. policy, not me.”

OK, I understand but I am disappointed because I wanted to tell you that when I was a child in the sixties, my DREAM was to grow up and be Brenda Starr, the red headed, ace investigative journalist and star reporter for the metropolitan daily, The Flash. Brenda boldly traveled the world searching for unusual and usually dangerous stories and she always knew when somebody was not telling the truth. Brenda also never backed down from setting the record straight.

After high school I was a copy girl in a Gannett affiliate but for lots of reasons, I changed my major from journalism to nursing and quickly forgot about my childish dream. That is, until June 2005, during my first of 7 trips to Israel Palestine. I was writing my first novel at the time, but I returned home determined to follow in the footsteps of Dorothy Day, who became a voice for the marginalized and oppressed and agitated church, state and the media in her publication, The Catholic Worker, which persists today.

But on 9 February 2009, I knew I wanted to be Helen Thomas because of this: Helen Thomas on her one question for Obama

And here is HOW and WHY I have tried:

On 21 April 2011, the USA MSM was once again deafeningly silent regarding the ongoing saga of Israel’s Nuclear Whistle Blower and this day in history in 2004.

A “Vanunu” Google News search turned up only two mentions of it; a letter published in the UK, Vanunu still not free The Guardian.

And my article: SECURITY’S Vendetta Against Vanunu Mordechai and This Day in History

I also wanted to THANK Ms. Thomas for speaking up about the fact that any Jew without any historical connection to Israel is encouraged to settle-as in colonize-upon legally owned Palestinian land.

I have tried since I went online in July 2005 to wake up clueless US Christians about the true facts on the ground in the so called Holy Land, which any one with eyes to see can see is in pieces:

I learned about, Aliyah, which means ‘going up,’ during my first of seven trips to Israel and occupied Palestine in June 2005 from an American Jewess who had taken the deal and she informed me:

I get fifteen hundred shekels or about thirty-six hundred dollars a year in increments to help with my expenses. I can apply for unemployment benefits after seven months, as long as I look for a job. I just completed Ulpan, which was five hundred hours of Hebrew language immersion studies that took five months, five hours a day, for five weeks. I get subsidized rent and just moved out of the Absorption Center Projects. All the new immigrants get room, utilities, and three meals a day for the first five months in Israel. We also receive free medical care and all the doctors here are dedicated. We can go to the university with 100 percent of the tuition paid by the government. College is much cheaper here; it’s about three thousand to four thousand dollars a year. Until I am thirty years old, I can receive up to three years of education for my master’s degree.

She was clueless as to the Palestinian side of the story just as most Americans are, and also clueless regarding these facts courtesy of http://ifamericansknew.org/

During Fiscal Year 2009, the U.S. is providing Israel with at least $8.2 million per day in military aid and $0 in military aid to the Palestinians. (View Sources & More Information)

1 Israeli is being held prisoner by Palestinians, while 5,935 Palestinians are currently imprisoned by Israel. (View Sources & More Information)

The Israeli unemployment rate is 6.4%, while the Palestinian unemployment in the West Bank is 16.5% and 40% in Gaza. (View Sources & More Information)

Israel currently has 236 Jewish-only settlements and ‘outposts’ built on confiscated Palestinian land. Palestinians do not have any settlements on Israeli land. (View Sources & More Information)

During the same week that I dreamed I would get to meet Helen Thomas, I also was grieving the loss of Vittorio Arrigoni, a winner

I am sad that my brief dream of meeting Helen Thomas is now a ghost, but I also follow in the spirit of Vik/Vittorio Arrigoni who always said, “STAY HUMAN” and he wanted to be [and is] remembered as “a Dreamer who Never Gives Up.”

While I will miss Helen in D.C., I will persist to do all I can to help Move Over AIPAC and work to change US foreign policy, because I also dream of a world where human rights are for all people and International Law is understood and honored.

But that would require a Media to report on what we the people need to know and then we the people would have to take our responsibilities as American citizens seriously and seize our RIGHTS:

“We hold these truths to be self-evident: That all [people] are created equal; that they are endowed by their creator with certain unalienable rights…that, to secure these rights, governments are instituted among [people], deriving their just powers from the consent of the governed; and, whenever any form of government becomes destructive of these ends, it is the RIGHT of the people to alter or to abolish it.” –The Declaration of Independence, July 4, 1776.