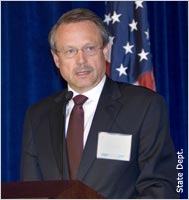 VietNamNet Bridge – The U.S.-based Pioneer Hi-Bred is eyeing Vietnam as a potential market for introducing its genetically-modified seeds owing to positive response from farmers, said the company’s president.

Paul Schickler of Pioneer told the Daily during his trip to Vietnam he received positive response from farmers using hybrid corn seeds in the Mekong Delta for high productivity.

“Farmers show high interest in the genetically modified organism (GMO) products that we’re going to bring to the market as Vietnam extends the sector in 2012,” he said.

He added that the future potential was great as GM seeds helped boost productivity and thus food security.

“Vietnam holds a very promising future thanks to strong economic growth, young population with 90 million people, but that also means you will need more and more food in order to secure food security. With limited land use, boost of productivity and ability against negative environmental factors such as climate change becomes so important that only GMOs can help,” he said.

According to Schickler, although the current rice productivity in Vietnam of seven tons per hectare is already high in the region, “farmers also need to find a new way to further boost productivity and protect crops against pest and weed without using too much pesticide and herbicide.”

Vietnam has launched a pilot program to develop GMO crops on a large scale, and the trial phase under the control of the Agriculture Ministry will complete by the end of 2011. The country will commercialize GMOs in 2012.

Pioneer Worldwide, with over 100 research stations globally, has cooperated with a rice research center in Indonesia and with the International Rice Research Institute in the Philippines and elsewhere.

Schickler said he is seeking to boost investment into research and development and production in Vietnam in the future like the model it is operating in other countries such as Thailand, Indonesia, the Philippines, China, and India.