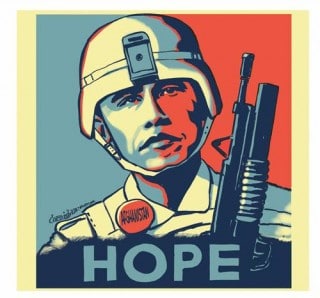 Last week Admiral Michael Mullen made rather blunt remarks in Islamabad that ISI’s continued links with the Haqqani network were at the core of Pakistan’s problematic relations with the United States. “The ISI has a rich history of how they operated in this part of the world, to protect their own country…The Haqqani network had fuelled the Afghan insurgency by supporting, training and funding fighters who were killing American and coalition troops in Afghanistan,” said the Admiral. Jockeying between the conflicting strategies of simultaneously wooing and weakening the Haqqani’s, Admiral is often fatigued enough to relapse into Bush era strategic environment. Dynamics of Afghan conflict have moved to new planes; it is an open secret that Admiral’s boys had been intimately negotiating with Haqqanis, both with and without ISI’s facilitation.

Likewise, recently released biannual report of the White House to Congress on Pakistan and Afghanistan, has cast critical aspersions on Pakistan, both in the domain of governance and counter-insurgency operations. This report is an indictment on Pakistan; and it accepts no responsibility regarding deliberate ambiguities in American policies towards Afghanistan and Pakistan.  White House is of the view that “There remains no clear path to defeating the insurgency in Pakistan, despite the unprecedented and sustained deployment of over 147,000 forces”.

The latest phase of the Mohmand operations which concluded in March has been cited as an example of Pakistan’s inability to hold and build areas cleared of militants. The fact that 50,000 internally displaced persons has been able to return to their homes in Mohmand agency as a result of “Operation Brekhna” finds no appreciation. Pakistan’s political and military leadership have been assessed harshly. America expects Pakistan to perform a feat single-handed which Americans could not accomplish with the military might of over 40 countries at their disposal.

America’s policy of measured vagueness in the context of troops’ pullout from Afghanistan has begun to haunt it; indeed the bluff has been called.  Though tempo of the events in Libya has eclipsed the Afghan issue, it will soon reoccupy the centre stage. Libyan conflict cannot be resolved inline with American blueprints without inducting a large number of land forces into the North African theatre; and such numbers would only be available if and when troops could be de-inducted from Afghanistan, and Iraq.

Though, Defence Secretary Robert Gates had told a recent West Point audience that “any future defence secretary who advises the president to again send a big American land army into Asia or into the Middle East or Africa should have his head examined”, he may already be busy in a number crunching exercise; challenges of extricating over 100,000 American troops from Afghanistan without a clear victory are indeed phenomenal.

Morale of the American troops is marred by fatigue, homesickness, weariness and mental disorders. Suicide rate among the American soldiers is on the rise; there were 252 cases in 2010. This trend is linked to drug abuse, brain injuries, depression and back home worries. Apart from numerous cases of indiscipline in Iraq and Afghanistan, several cases of shootings within military establishments have also occurred inside American mainland.

President Karzai has announced the start of the transition process in Afghanistan. Going by the numbers, recruitment of Afghan security forces is expected to achieve its target figure of around 300,000 Afghans by coming October. However, infiltration of security forces by the Taliban is out of the ordinary. There have been a number of recent cases of Afghan security personnel killing foreign soldiers. Earlier this month, two American soldiers on a training mission were killed by a policeman.

Representation of Pushtuns in the security forces remains a challenge. Only 3.7 per cent of recruited Pushtuns are from southern Afghanistan against a target figure of 10 per cent. Tajiks are over represented in the Afghan National Army by about 8 per cent and by more than 15 per cent in the police. With these compositional and Psychological issues at hand, Afghan security forces represent a ticking bomb.

Reconstitution of the upgraded ‘Peace Commission’ radiates a ray of hope. President Karzai has announced that the upgraded commission also enjoyed US support. However, track record of such earlier efforts is not quite enviable. Moreover any concept or terminology that originates from America is not likely to sell well amongst the masses of Afghanistan. Any solution that is not owned and led by Afghans is destined to doom.

Turkey has since long been sincerely trying to play its role to sort out Afghanistan problem and for this purpose it has hosted several rounds of talks between Pakistani and Afghan leadership. Turkish initiative of allowing Taliban to set up their liaison office in Turkey is a positive development. This would bring various factions of Taliban closer to each other; and existence of a formal office would give legitimacy to an otherwise established reality of the political clout of Taliban. It would be appropriate if other countries as well as OIC, NAM, SAARC and the UN also allow such representation to Taliban. However, once again the fundamental error is exclusion of Iran from this process. Sustainable peace cannot be achieved in Afghanistan without taking Iran on board.

If anything could restore normalcy in today’s troubled Afghanistan, it is a comprehensive national reconciliation in which all Afghan have a stake. Fast emerging unfavourable security situation has compelled the US to negotiate with Taliban for a political settlement. Strenuous efforts (read machinations) are being made by the USA to win over Taliban. Initially these contacts were made secretly with India as behind the door facilitator. Later on, secrecy had to be abandoned when the US as well as President Karzai concluded that without active participation of Pakistan no headway could be made. Main stream Taliban entities are still united under Mullah Omar and have rejected pre-conditions of USA. They are aware that the US is no longer in a position to call the shots. Despite two troop surges the balance remains tilted in favour of Taliban. Taliban could not be split up. They are convinced that they have already won the war, and the countdown has started. Hence they are in no mood to compromise on American terms. For them, the US is now like a wounded animal which has transformed from a hunter into a hunted prey.

There are test balloons indicating an American stay up to 2024. President Karzai has recently stated that America intends to establish permanent military bases in Afghanistan. The US has for long been eying on Kabul, Baghram, Kandahar, Shindad and Herat as its military bases. These places are being speedily fortified and modernised. However, resurgence of Taliban, war weariness, haywire economy and uprisings in Middle East and Africa are compelling America to call it a day. Though Lisbon summit extended the tenure of this dead-ended war till 2014, a speedy withdrawal may be in the offing.

Author is an Adviser to Opinion Maker.