Home Economy Refusing to Raise U.S. Debt Is Not the End of the World... 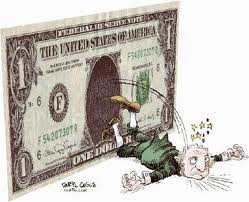 Refusing to Raise U.S. Debt Is Not the End of the World Doom

The world as we now know is an effort to continue with a flawed systemic century old dynamic which is counter-intuitive to capitalism, free markets, sovereignty, freedom, and self- dignity.   Operated by a defunct cadre or bankrupt syndicate. “In the absence of that which you are not, that which you are… is not.”

Raising the U.S. debt limits is an ignorant refusal to sustain insurmountable wars to control and confiscate free markets including the finite assault on the Universal Laws of the Universe.

A defunct cadre that ignores its cavalier approach suppresses the manufactured perpetrated control of free market correction and the assault on the Universal Laws of Nature. The Laws of the Universe which correct chaos into the natural order of the Universe. Posted by ezinearticle

“It’s important to remember that even government debt is not risk-free. Governments have been known to default on debt. Russia, Ecuador, Chile…and many more have defaulted just in the last century. Why don’t you hear about it? Why are government bonds always called “risk-free” or “Inflation-Protected Securities”? Why don’t they come out and tell you that government debt has a reckless – even disastrous – past? Read the Secret History of Government Debt.

A flawed policy assaulting the Natural Laws of the Universe. The U.S., D.C, London, and Hollywood collusion of cronyism’s assault on the global environment, rigged control of free markets, and human self-dignity. Every cause has an effect, and every effect has a cause.

The Law of Cause and Effect states that for every action, there is an equal and opposite reaction. Every cause has an effect, and every effect has a cause. Be at cause for what you want, and you will get the effect. All thought is creative, so be careful what you wish for… you will get it.

Monolithic control to the detriment of Natural Laws of the Universe. The Law of Polarity states that everything has an opposite. Hot Cold, Light Dark, Up Down, Good Bad, Black White. In the absence of that which you are not, that which you are… is not.

Translation: cadres of a corrupt systemic dynamic parlaying rigged bureaucratic apparatus and criminal crime controlled markets by manufacturing chaos. The dysfunctional and delusional attempt to neutralize the laws of polarity and the natural order of the Universe. Thereby accelerating absolute annihilation by poisoning and irradiating the global environment and total war against humanity for continued absolute control over a rigged political financial and economic system.

Confirmation is documented and self admitted on a manufactured daily schedule of criminal actions across the global spectrum “Only those in power still have rights. They give themselves the licenses they need, from the “license to plunder” to the “license to kill”. Those who get in their way or challenge their “rights” are vilified, criminalized and to an increasing degree defined as “terrorists” or, in the case of defiant governments, as “rogue states” – a label that usually implies threatened or actual military attack, as we can see in the cases of Yugoslavia, Afghanistan and Iraq, and maybe Syria and Iran in the near future.”

“Human rights and rights of sovereignty have been transferred from people, communities and governments to corporations. The notion of the people as a sovereign body has practically been abolished. according to the inferior role they play in the proto-despotic “New World Order”. Democracy appears outdated. After all, it “hinders business.” Posted in an Article; “Is there Alternative to Plundering the Earth” by Global Research

If what you are not didn’t coexist with what you are, then what you are could not be.   “The nihilism of our economic system is evident. The whole world will be transformed into money – and then it will disappear. After all, money cannot be eaten. What no one seems to consider is the fact that it is impossible to re-transform commodities, money, capital and machinery into nature or concrete wealth. It seems that underlying all “economic development” is the assumption that “resources”, the “sources of wealth”, are renewable and everlasting – just like the “growth” they create.” Posted by Prof. Claudia vonWerlhof Global Research.

Summary ‘We the People’ Destined to Illusions, Pipe Dreams, Destruction

No individual, entity, nation, creed, religion, organization, or forum “owns”the inherent rights to global humanitarian self-dignity. Nevertheless, ‘We the People’ are inflicted with ‘Stockholm Syndrome’ coupled with a severe disease of the” lies of the pipe dreams”  “Iceman Cometh” Published by Eugene O’Neill.

Excerpt from “Iceman Cometh” “Rocky sneaks Larry a free drink. Larry says he’ll pay “tomorrow,” then remarks that all of the men have great plans for a tomorrow that will never come, that all are given hope only by ‘‘the lie of the pipe dream.’’ Larry claims to be the exception; he believes he has no pipe dream. He awaits death”. c.1939 Eugene O”Neill“ Iceman Cometh”

Exacerbating a flawed nation of illusions, magic of compound interest myths, and the “lie of pipe dreams.” Consequently, by raising the U.S. debt limits, and irresponsible QE1 QE2 welfare bailouts the private bank baron deceptions self perpetuates it’s Too Big To Fail delusions. Nevertheless, the end of the world and the end of our economic and financial systems are inane blather of extenuating circumstances that propel the “lie of the pipe dreams” to the masses. See video of Sen Paul Ryan explaining the U.S. party line ‘Reverse Robin Hood Theory.’

In conclusion, the myth or the “lie of the pipe dreams” riches, peace, and prosperity that always arrive tomorrow is the false systemic financial and economic corruption including unsustainable wars that have had total control over ‘We the People’ for the last century. 20th Century of absolute control by attempting a trajectory of chaos to the Universal Laws of Nature.Resulting in U.S. flaws and corruption disrupting the natural balance and order of free markets. Restraining the Universal Laws of Nature, human self-dignity, propelling crimes against mankind’s written laws handed down throughout the centuries.  See Video Sen Paul Ryan explaining ‘Reverse U.S. Robin Hood Theory.’