Home World When in doubt, give a Middle East speech

So let the speeches begin. Who knows? Maybe in some turn of phrase or dangling participle lurks the key to Middle East peace. Certainly, talking is a lot better than shooting. 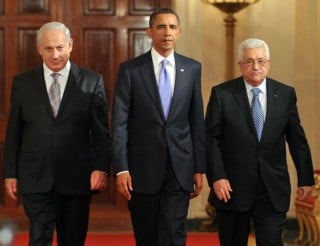 The problem with all these initiatives is that none have a strategy to move from words to deeds. The Palestinians actually come closest with their U.N. initiative, but this is, under the best of circumstances, a dangerous leap in the dark unlikely to produce real statehood — and more likely to generate trouble. All these budding initiatives have the feel of a game of “gotcha” or musical chairs designed to deflect or pre-empt pressure and put it on someone else — to see, in effect, who’s the odd man out when the music stops.

Negotiations remain the only realistic path forward, but the gaps on the core issues are too large to bridge at present. Or to put it more explicitly, Israeli and Palestinian leaders are too constrained to bridge them; the Arab world is too distracted to bring much focus to the problem; and the United States is too unsure about how or what to do about any of the above. As Shultz noted, it’s the perfect time to give a speech.

That the Obama administration is thinking about laying out its own views on borders, Jerusalem, security, and refugees when there’s no chance of actual negotiations tells you how virtual the peace process has become. The sad reality is that right now the default position is the declaratory one. Unless Netanyahu comes up with something really credible on borders upon which Obama can build, like a chain of falling dominoes we will be drawn inexorably toward more (and unhelpful) Palestinian declarations in New York, and likely more unilateralism and violence.

The only conceivable logic in the president laying out detailed positions on borders, Jerusalem, security, and refugees would be to first improve American credibility in the Middle East, though how a speech that Israelis and Palestinians reject or accept with reservations helps the United States isn’t altogether clear. In fact, it could undermine America’s influence, becoming the foreign-policy equivalent of BP’s Deepwater Horizon disaster: day 80 and nobody’s plugged the leak or accepted the Obama plan. The only other possible utility of such a speech would be to attempt to pre-wire it so that the Palestinians accept the parameters for negotiations and are willing to come back to the table on that basis.

Netanyahu would then be forced to choose, or face the consequences in Israeli domestic politics (should ties with the United States fray) and internationally. Washington has never played this hand particularly well, and if the perception is that Obama is trying to set the Israelis up, it certainly won’t help the president as he heads into a reelection campaign. But this gambit isn’t about getting the two sides to the table soon; it’s about regime change in Israel — never declared of course, but like U.S. Libya policy, an unstated goal.

This unhappy state of affairs is a result of what happens when you face a truly tough problem that nobody has the will or determination to take on. And when unilateral solutions (Gaza disengagement) and bilateral ones (a decade of negotiations on permanent status) backfire; when interim solutions (along the lines of the Oslo Accords) no longer pass muster; and when violence (the 2006 Israel-Hamas war) can’t seem to change the calculations of the parties, you arrive at a nasty impasse.

The short answer to whether the Israelis and Palestinians are ready for a conflict-ending agreement is no. And can Washington do anything about it? Not much. Obama could travel to Israel and Palestine to lay out his ideas, appearing with Arab leaders (if there are any left) in both the Knesset and the Palestinian Legislative Council; he could commit millions of international dollars in the service of Palestinian statehood. But the chances that he would actually risk this, or that such a gambit could work under the current circumstances, are slim to none.

Or in the less-than-bold category, Obama could simply give his speech laying out the core positions on the key issues with no real expectation that talks would begin, try to work with Israelis and Palestinians on economic and security matters, and wait for reelection to try something more dramatic. But the simple fact is that Washington needs the locals to buy into something for there to be a real breakthrough; and that’s unlikely to happen.

So let the speeches begin. Who knows? Maybe in some turn of phrase or dangling participle lurks the key to Middle East peace. Certainly, talking is a lot better than shooting.

But tragically, history has shown that when the speeches are over, there will be plenty of time for that.

Aaron David Miller is a public policy scholar at the Woodrow Wilson International Center for Scholars. His book, Can America Have Another Great President?, will be published later this year.