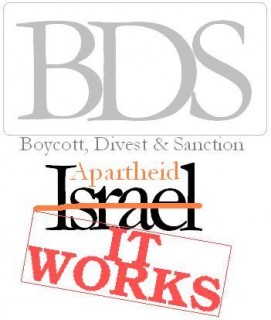 On March 30th at 5 pm, a group of social justice activists held a “flash-mob” in downtown Chicago. The demonstration was organized as one of hundreds of demonstrations held around the world to mark the Boycott Divestment and Sanctions Global Day of Action, an annual event designed to call attention to the movement to boycott the apartheid policies of Israel. Demonstrators performed a choreographed dance to an original song called “BDS,” a parody of “ABC” by the Jackson Five. Video of the flash mob is available here:

“In the lyrics to our song, we sing ‘apartheid and ethnic cleansing go on in Palestine every day, but without the help of you and your money, the occupation will go away.’ While the struggle to end Israel’s apartheid policies is not an easy one, it’s true that we in the United States can support justice and peace by refusing to support companies and institutions that support Israel and its occupation of Palestine,” said Joy Ellison, an activist with Palestine Solidarity Group-Chicago (PSG-Chicago).

“We hope that this flash mob empowers our community to stand up against apartheid and challenges Chicago businesses and institutions that are actively supporting the oppression of the Palestinian people.”

Before this performance at “The Bean,” the flash mob was held outside of Chicago Cultural Center, home of the Chicago Sister Cities International office. For the last two years, activists with PSG-Chicago have pressured the city of Chicago to end its relationship with its Israeli sister city, Petach Tikva. Petach Tikva, an officially segregated city, is the first Jewish-only settlement in historic Palestine and the site of the primary detention center where Israeli forces abuse and torture Palestinian political prisoners. Human Rights group Amnesty International dubbed Petach Tikva “Israel’s Guantanamo.”