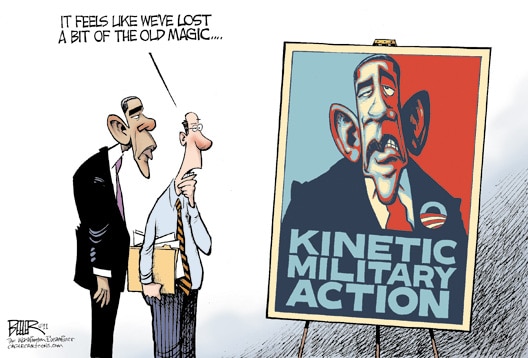 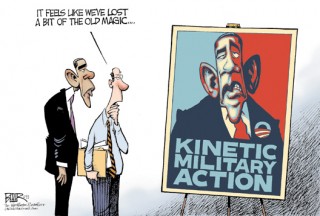 Ah yes, Obama has lost not only his old magic but his progressive and Independent base ~ who are fed up with his broken promises and are actively seeking a true progressive to defeat him in the upcoming presidential primaries.

On December 7, 2007 Barack Obama said “The President does not have power under the Constitution to unilaterally authorize a military attack in a situation that does not involve stopping an actual or imminent threat to the nation” ~ another broken promise thrown into the trash can of history as President Obama orchestrates regime change and an obvious oil grab in Libya under the guise of a NATO humanitarian intervention. The Obama administration launched this new war with no official congressional authorization, little if any public debate and with a vague and non-existent endgame in mind ~ except, of course, thinly veiled regime Change.

But now in a desperate and transparent attempt to gain bipartisan support for this illegal action, Obama has enlisted Senator John “Bombs Away “ McCain to sell this North African misadventure.

And just who are these so-called Libyan Rebels? Check out the pictures of the “rebels.” Do you really think these guys could push back a military force? Even once?

It’s a photo Op war fueled by the Main Stream Media and now Senator John McCain who called his recent visit to charade-town one of “the most inspiring days of his life.”    Five minute Video:

As for ‘Bomb, Bomb’ McCain ~ John McCain never saw an illegal war he didn’t like or, for that matter, a crooked banker. Remember, McCain was one of the “Keating Five” who aided one of the biggest scams of the Savings and Loan crisis days. McClain’s proclamation that the media-created Libyan “rebels” provided him one of the most inspiring days of his life has virtually zero credibility. The well known problem with McCain is that he doesn’t keep his stories straight ~ perhaps its old age but here’s a three minute video that was passed around and viewed by over 2 million BrasscheckTV viewers during the 2008 election as a reminder of who we are dealing with. 3 Minute Video:

What has already taken place ~ and further military escalation is now being proposed ~ goes well beyond a “no fly zone” and also goes well beyond what the UN Security Council approved. The UN never approved a military campaign for regime change, but that is what France, Britain, and the U.S. are conducting, under the pretense of “protecting civilians.”  Moscow has harshly criticized the actions of the Western coalition and their partners, rightfully arguing that NATO is abusing its UN mandate while hardening the resolve of the CIA advised rebel opposition, of which virtually nothing is known ~ for reasons I have already discussed.
More importantly, In the past, Presidents told lies to trick Congress into authorizing wars. The War on Libya is different: President Obama started the war first, and THEN lied about it.

The President has now admitted that his real goal is NOT to avert the killing of civilians, but to remove Qaddafi from power. Here we have more “mission creep,” just like in previous wars. Now, the use of U.S. ground troops is not only possible, it’s probable.  Here’s two reasons why ~

1.The only way for Obama to politically “save face” is to achieve “victory” by removing Qaddafi from power.
2. But the only way to remove Qaddafi is invasion.

But then there’s the puzzle of the Libyan central bank which may fully explain McCain’s recent visit to Libya.

In an article posted on the Market Oracle, Eric Encina observed:
“One seldom mentioned fact by western politicians and media pundits: the Central Bank of Libya is 100% State Owned. . . . Currently, the Libyan government creates its own money, the Libyan Dinar, through the facilities of its own central bank. Few can argue that Libya is a sovereign nation with its own great resources, able to sustain its own economic destiny. One major problem for globalist banking cartels is that in order to do business with Libya, they must go through the Libyan Central Bank and its national currency, a place where they have absolutely zero dominion or power-broking ability.  Hence, taking down the Central Bank of Libya (CBL) may not appear in the speeches of Obama, Cameron and Sarkozy but this is certainly at the top of the globalist agenda for absorbing Libya into its hive of compliant nations.”

Now we know why Congress has done NOTHING to hold the President accountable for plunging the U.S. into a war of uncertain aims and goals ~ the plutocracy is fully in favor of eliminating Qaddafi who won’t play be the rules and control of the new world order. Don’t forget, Obama answers to the Global financial elite and not to the American people.

As Cynthia McKinney eloquently says, “Understanding the war against Quaddafi as a war in defense of empire is another step in the direction of helping us ask ourselves whether we want to continue along this path of empire-building.  Or do we instead want to honor the democratic principles we are taught to believe are the foundations of our country?”  See Article ~

Barbara Jordon once said ~ “What the people want is very simple – they want an America as good as its promise” and that is one giant promise that President Obama cannot continue to keep breaking with his continued defense of Empire building.

Obama’s and McCain’s folly in Libya must be ended soon and we end by the same method we ended the Vietnam conflict ~ we stop funding it!

Allen L Roland is a practicing psychotherapist, author and lecturer who also shares a daily political and social commentary on his web log and website allenroland.com He also guest hosts a monthly national radio show TRUTHTALK on  www.conscioustalk.net