With both organizations having lost their sponsors and afraid its leadership may face the same fate as Hosni Mubarak and Bashar Assad, they pre-empted it with a quick announcement of “reconciliation.” Saving their skin is no doubt one key factor that is behind this quick agreement. 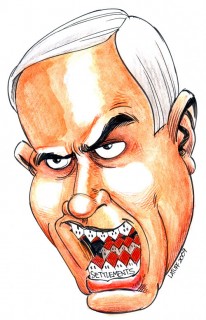 The news coming out of Cairo in the last 48 hours is very surprising to every one.  Most of all to Bibi Netanyahu who gave Mahmoud Abbas a choice; either peace with Israel or reconciliation with Hamas and who ordered his security forces to put more squeeze on Gaza.

Bibi forgetting that Mahmoud Abbas has been knocking on the doors of Israel on his hands and knees begging for peace with or without Hamas for over 20 years and there was one answer, Jewish Occupation and expansion of Jewish Settlements colonies, more important than peace with the Palestinians.

I do not want to throw cold water on what was agreed to in Cairo between Azzam Al-Ahmed and Musa Abu-Marzouk, though by watching in depth interviews with both gentlemen one can only come out with headlines.

Of course Fatah and the PLO lost a sponsor and an advocate in Hosni Mubarak who is now in prison and may face hanging.

Hamas is in deep trouble with its sponsor and advocate Bashar Assad who is in deep trouble and may lose power and may face the same fate as that of Hosni Mubarak. Hamas cannot count on Iran, as Iran will also face an uprising that will sweep the government of the Mullahs.

With both organizations having lost their sponsors and afraid its leadership may face the same fate as Hosni Mubarak and Bashar Assad, they pre-empted it with a quick announcement of “reconciliation.”  Saving their skin is no doubt one key factor that is behind this quick agreement.

Missing from all of this is the response from the US which funds and contributes $470 millions a year to the Palestinian Authority in partial defraying the costs of the Jewish Occupation.  America does not contribute this kind of money for the black eyes of the Palestinians but for the interests of Israel first and foremost.

The questions both Hamas and Fatah have to face is this, will the new government continue to manage the Jewish Occupation as agreed to under Oslo? And will it continue to act as a security contractor for the Israeli Occupation not different from Blackwater for the American Occupation in Iraq.

The US and the EC and to a certain extent some Arab donors know that funding the Palestinian Authority and keeping it in business is also funding the Jewish Occupation and the money contributed is a saving for Israel to use in its settlement activities, costs it will have to dish out if the Palestinian Authority was not there to do the job for Israel.

For sure the American Knesset will not approve any more funds or contributions to the Palestinian Authority and Barack Obama facing a re-election cannot afford to lose his big time American Jewish/Zionist donors.

Mahmoud Abbas only few days ago, announced he will do all he can to make sure there is no Third Intifada.  I have no idea how Mahmoud Abbas and Khalid Mishal will  reconcile their agreement with the Palestinian Authority continuing its relations with both Israel and America when both are not ready and not willing to move forward with peace with Hamas.

So far and after 20 years of negotiations with Israel, and the US, Mahmoud Abbas has been losing lots of grounds (real land) to the Jewish Occupation and has not made any gains for the people whatsoever, except keeping Fatah and the PLO in business managing the Jewish Occupation.

I have no idea how the Palestinian leadership plans to end the Jewish Occupation?  Since Israel and the US are not willing to move forward with negotiations that ends the Jewish Occupation, end the Settlement activities, let alone force the vacating of some 500,000 armed settlers ready to go to war if Israel or any one else forces them to move out.

Obama is a lost cause and no one should count on him for any thing. The man who orders a “veto” of the UNSC resolution on Jewish settlements could not be counted on for any thing.  He is not his own man.

Perhaps the only thing ahead for the Palestinian people is a Third Intifada, not like the one aborted by Arafat and Abu-Jihad as a prelude to Oslo.

And certainly not a Second Intifada which was so poorly managed and administered by Arafat that it not only allowed Israel to re-occupy areas it redeployed from with Oslo, but destroyed billions worth of infrastructures. It created a bunch of  thugs and gangs in the name of liberation and created a state of chaos in the Palestinian Territories.

The Third Intifada has to be civil, unarmed, persistent and consistent civil uprising, general strike, destruction and burning of all Israeli issued IDs.  It should call for all Palestinian big shots to give up their VIP passes and of course the Palestinian Authority to disband since it should not do any service for and on behalf of Israel.

It must chose either to be with the people in their uprising, or betray them by partnering  in the Jewish Occupation.

ABOUT THE AUTHOR: SAMI JAMIL JADALLAH is born in the Palestinian city of El-Bireh (presently under Israeli Military and Settlers Occupation). Immigrated to the US in 62. After graduating from high school in Gary, Indiana was drafted into the US Army (66-68) received the Leadership Award from the US 6th Army NCO Academy in Ft. Lewis, Washington. Five of us brothers were in US military service about the same time (Nabil-Army), (Lutfi-Marines), (Sam-Army) and (Taiseer-Marines) with two nephews presently with US Army. Graduated from …Read Full Bio