I congratulate both America and the Muslim world for this great success. 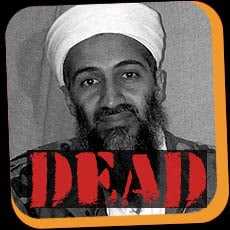 I celebrate and congratulate the American Special Operation unit that killed Osama Bin Laden. I congratulate both America and the Muslim world for this great success. No man and no organization in recent memory, perhaps in the last 500 years had done more damage to Islam and the Arabs than Osama and his Islamist Jihadists including Alqaeda, Taliban’s and other small fringe groups of killers and murderers.

No one can convince me or hundreds of millions like me in the US and around the world that a group of 18 people can do what they did without key assistance from the inside.

Osama Bin Laden was a bonanza, a windfall for the world Zionists and NeoCons, and the September 11 attack was what was needed by these Zionist NeoCons to have their new world order and to take charge of both US domestic and foreign policy and to have their imprint on US “anti-terrorism” agenda. An agenda that has created animosity for America around the world not only in the Muslim world, and is driving America to the verge of bankruptcy while creating a windfall for Israel as the primary beneficiary of “US war on terror.” The war on terror has served Israel very well, it served its agenda in the American Knesset, and it served Israel well with its industry and intelligence services and the ability to have its Fifth Column in the US by invitation.

One has to see what did Osama and his Alqaeda do for Islam and for Arabs, nothing, absolutely nothing? Only death, destruction, cold blooded murder, ignorance and mental retardation, setting the Arab and Muslim world centuries behind, diverting precious financial and human resources from building modern nation states to catch up with the rest of the world, bogged down in trivial issues such as which foot first to step into the house or the mosque. Buying guns for killing rather than bread for feeding. It gave excuses for dictatorships the likes of Pervaz Musharraf,  Hosni Mubarak, Bin Ali and Ali Saleh to sell themselves as the front line against Islamist radicals and Jihadists. It allowed dictators like Bashar Assad and his father before him to use the fight against Islamist to solidify their family rules and do what they are doing in Syria. Muamar Gaddafi too sold himself to the West as a fighter of Alqaeda and continues to do the same now as he goes about killing and murdering his own people.

We know what Osama Bin Laden did for Israel and its agenda, but I am not aware of any thing he did for Islam or Muslims? I am not aware of him or his criminal gangs and thugs ever building a school, or a hospital or a clinic, to treat all the victims of suicide bombings, or a bakery or a small factory where women can earn a decent living to help their children while their men are waging Jihad. I am not aware of an instance when these Jihadists sponsored a scientific research into many of the ills and diseases that kills millions of people in the Muslim world, or sponsor a research into food production that can help feed the millions of starving Muslims. Osama Bin Laden and Taliban’s turned soccer stadiums to a theater of the absurd, chopping hands, cutting off heads, stoning women, a showcase of a criminal mind sick mind. They have reduced the great religion of Islam from one of scholarship and learning to ignorance and destruction. They simply killed the joy out of life and out of Islam.

This of course raises the core issue of this essay, “when does a targeted killing become legal and legitimate?” Serious question that needed serious debate. I have no answer for this; however I do raise the issue.

Would the early killing and murder of Adolf Hitler, Adolf Eichmann, Klaus Barbie, Joseph Goebbels, Herman Goring, and Hans Aumeier change things and save the world, the cold blooded murder of millions of Jews, not to mention the tens of millions of others who died during the war? Would the early killing of Lenin change the course of history of the Bolshevik revolution? Or would the killing of Joseph Stalin change the program of relocation and forced collective farms that killed 35 million people in the process?

Would the targeted killings of Pol Pot of Cambodia in the early days of the Khmer Rouge change a thing, saving 2 million lives? Would the early assassination of Vladimir Jabotinsky, Menachem Begin, and Yitzhak Shamir, Ariel Sharon or Theodore Hertzel change any thing, saving the Jews and the world from the scourge of Zionism?

The same can be said of Pablo Escobar and the Columbian drug cartel, or Saddam Hussein and his murderous Ba’athist regime or the Shah of Iran and his dictatorial klepto-regime, or the assassination of Ayatollah Khomeini change the course of history in Iran? And would the targeted assassination of Muamar Gaddafi and his sons bring an end to their crimes and carnage waged in Libya?

As I said before, these are legitimate questions that needs a serious debate and should publicly open the discussions and discourse. Will the saving of a nation, or thousand, or ten thousands or a million or six millions justify the targeted assassination and murder of a criminal dictator or a gang leader? And who makes such a decision and under what conditions and circumstances?

I guess legal experts, criminologists, international law experts, sociologists, psychologists, moralist, politicians; religious scholars should wade into this topic and give us the people a clear guideline of when a targeted assassination becomes the “right thing to do”?

Of course I do not expect only the Israelis or the Americans or the Europeans to make the rules, but the Muslims, the Hindus, the Chinese, the Indians, the Latin Americans, perhaps even the UN should take this hot topic and issue a guideline. I know the UN so far has failed to define or distinguish between “terrorism” and ‘the fight for national liberation” and of course for obvious reasons, the Jewish Occupation of Palestine.

ABOUT THE AUTHOR: SAMI JAMIL JADALLAH Born in the Palestinian city of El-Bireh (presently under Israeli Military and Settlers Occupation). Immigrated to the US in 62. After graduating from high school in Gary, Indiana was drafted into the US Army (66-68) received the Leadership Award from the US 6th Army NCO Academy in Ft. Lewis, Washington. Five of us brothers were in US military service about the same time (Nabil-Army), (Lutfi-Marines), (Sam-Army) and (Taiseer-Marines) with two nephews presently with US Army. Graduated from …Read Full Bio
More posts by the Author »