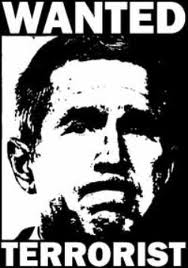 If President Obama believes “justice has been done” by the killing of terror mastermind Osama bin Laden—allegedly responsible for the deaths of 3,000 civilians in the 2001 World Trade Center attack—why hasn’t he indicted former President George W. Bush, the architect of an illegal war that has killed some 5,000 U.S. troops and perhaps a quarter of a million Iraqi civilians?

How can President Obama talk about justice concerning bin Laden while steadfastly refusing to indict his own predecessor who deceived the American people into making a war against Iraq based on fabricated intelligence and outright lies? Why aren’t former Vice President Dick Cheney and Defense Secretary Donald Rumsfeld and other Bush team players under arrest at this hour?

Why is there no prosecution of the officials who sucked $3 trillion in tax dollars from the pockets of American workers to wage a war against a country that posed no threat to them?

President Obama’s failure to prosecute Bush-Cheney clearly violates his obligation to enforce the U.S. Constitution—a document that incorporates the United Nations Charter which the Bush White House violated when it attacked Afghanistan and Iraq.

And it also sends a signal to the world that the White House today considers itself above the law of nations; that others such as bin Laden must pay for their crimes but that the highest American public officials may commit crimes and yet are exempted from prosecution. If this isn’t the “master race” theory with America at the top of the pyramid, what is?

While fair-minded Americans recognize President Bush made an illegal, criminal war on Iraq, they are less certain about whether his attack on Afghanistan was just. However, as University of Illinois professor of international law Francis Boyle wrote for the Atlantic Free Press: “There is so far no evidence produced that the state of Afghanistan, at the time(9/11), either attacked the United States or authorized or approved such an attack.”

In his book, “The Prosecution of George W. Bush For Murder”(Vanguard), former Los Angeles County Deputy District Attorney Vincent Bugliosi holds that Mr. Bush intentionally misled Congress into invading Iraq to overthrow dictator Saddam Hussein. In a summary of that book, Wikipedia wrote, the strongest evidence against Bush was his own Oct. 7, 2002, speech claiming Iraq posed an imminent threat when a National Intelligence Estimate “less than a week earlier stated that while Iraq did have WMD capabilities, it had no plans to use its weapons except in the capacity of self-defense…” Of course, it turned out that Hussein had zero WMD.

And far from making serious efforts to avoid war, Bugliosi wrote, Bush even considered the possibility of provoking Hussein by falsely painting American U2 spy planes with United Nations colors and having them overfly Iraq to lure Hussein into attacking them, whereupon U.S. fighters would shoot down the attackers, starting the war, Wikipedia reported. Perhaps nothing else shows so clearly Bush’s willful intent to start the war.

President Obama clearly sees only the evidence he wants to see. A former CIA employee, he has also declined to prosecute the CIA officials who tortured Middle East captives and who in 2005 destroyed documentary evidence of those crimes, very likely obstruction of justice.

Veteran New York Times reporter Tim Weiner wrote of President Obama’s task in an Afterword to his book, “Legacy of Ashes: The History of the CIA”(Random House): “he must restore principles” to our foreign policy. “That means renouncing torture as a tool of American power, returning habeas corpus to its rightful place in American law, closing Guantanamo, and shutting the secret prisons. It means limiting the state secrets privilege by which presidents block American courts from administering justice. It means an end to the arrogation of presidential powers and a return to constitutional checks and balances in the realm of American national security.” Of course, after more than two years in office, President Obama appears to be utterly indifferent to these standards, just as he attacked Libya without seeking the consent of Congress, just as he authorized reckless CIA drone assassination attacks in Pakistan that have resulted in hundreds of civilian deaths.

The killing of any human being, even the very worst, is no signal for rejoicing. But for President Obama to call bin Laden’s killing “just” while failing to indict Mr. Bush and his aides who also resorted to terror, reveals a dangerous and disgraceful double-standard.

About the Writer: Sherwood Ross, a former reporter for major U.S. dailies and wire service columnist, is director of the Anti-War News Service. To comment or contribute to his news service, reach him at [email protected]