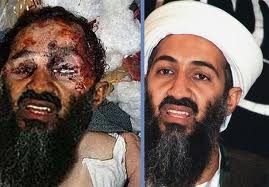 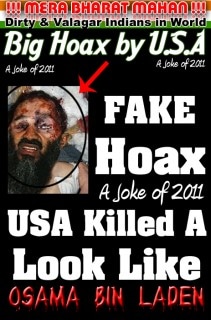 There was only one thing more predictable than the Sun was going to rise in the East, and that was the fact that a group of idiots was going to pop up and claim that the Bin Laden killing was a hoax. And sure enough, even though the man was buried at sea, he’s not even wet yet and I’ve already started getting email from “Bin Laden Hoaxers.” So I decided to write a standard response, and here it is:

Please stop sending me these crazy conspiracy theories. The only people who are going to entertain this nonsense for one second are your fellow idiots. We have pictures of Osama, his DNA, and positive ID by his wife. In addition, if this was a hoax, there’s no way in hell the Republicans would keep quiet and let Obama take credit for killing Bin Laden. The Republican’s would have left no stone unturned to ensure that the hoax was pulled off during the Bush administration in order to help Sen. McCain win the presidency. And they would have had a powerful argument for doing so. After all, the GOP is much more practiced at lying to the American people.

In addition, the foundation of your theory is predicated on the fact that the Republicans and Democrats are working together to pull off the hoax. If you’re prepared to embrace that belief, that alone makes you one of two things, either incredibly naive, or just plain stupid. Anyone with one iota of common sense clearly recognizes that the Republicans and Democrats are both too self-serving, and lack the maturity, to work together on anything.

And finally, in order to pull off a hoax of that magnitude, not only would thousands of people around the world have to be a party to it (including Al Qaeda), but all of them would have to be persuaded to keep their mouths shut. Do I have to calculate the odds against that happening?

So again, please don’t send me any more of this bullshit.  It’s insulting. Just receiving it says that you think I’m stupid.

Damn! There’s no limit to how far some people will go to deny Obama credit for doing a good job.