Home Government The Predators: Where is Your Democracy? 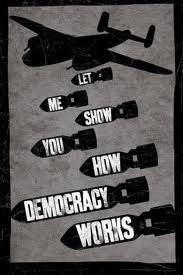 World attention has been focused, however briefly, on questions of legality regarding the killing of Osama bin Laden. But, with the increasing use of Predator drones to kill suspected “high value targets” in Pakistan and Afghanistan, extrajudicial killings by U.S. military forces have become the new norm.

Just three days after Osama bin Laden was killed, an attack employing remote-control aerial drones killed fifteen people in Pakistan and wounded four. CNN reports that their Islamabad bureau has counted four drone strikes over the last month and a half since the March 17 drone attack which killed 44 people in Pakistan’s tribal region. This most recent suspected strike was the 21st this year. There were 111 strikes in 2010. The Human Rights Commission of Pakistan estimated that 957 innocent civilians were killed in 2010.

I’m reminded of an encounter I had, in May, 2010, when a journalist and a social worker from North Waziristan met with a small Voices for Creative Nonviolence delegation in Pakistan and described, in gory and graphic detail, the scenes of drone attacks which they had personally witnessed: the carbonized bodies, burned so fully they could be identified by legs and hands alone, the bystanders sent flying like dolls through the air to break, with shattered bones and sometimes-fatal brain injuries, upon walls and stone.

“Do Americans know about the drones?” the journalist asked me. I said I thought that awareness was growing on University campuses and among peace groups. “This isn’t what I’m asking,” he politely insisted. “What I want to know is if average Americans know that their country is attacking Pakistan with drones that carry bombs. Do they know this?”

Ideally, in a democracy, people are educated about important matters, and they can influence decisions about these issues by voting for people who represent their point of view.

Only a handful of U.S. officials have broached the issue of whether or not it is right for the U.S. to use unmanned aerial vehicles to function as prosecutor, judge, jury and executioner in the decision to assassinate anyone designated as a “high value target” in faraway Pakistan or Afghanistan.

Would we want unmanned aerial vehicles piloted by another country to fly over the U.S., targeting individuals deemed to be a threat to the safety of their people, firing Hellfire missiles or dropping 500 pound bombs over suspected “high value targets” on the hunch of a soldier or general without evidence and without any consideration of which innocent civilians will also be killed?

Fully informed citizens might be invited to consider the Golden Rule of “do unto others as you would have them do unto you,” but they would certainly be involved in the debate over how we will be treated in future years and decades when these weapons have proliferated. In 1945, only one country possessed the atomic bomb, but within decades, the “nuclear club” had expanded to five declared and four non-declared nuclear-armed states in a much less certain world. Besides the risk of nuclear war, this weapon proliferation has consumed resources that could have been directed toward feeding a hungry world or eradicating disease or easing the effects of impoverishment.

As of now, worldwide, 49 companies make 450 different drone aircraft. Drone merchants expect that drone sales will earn $20.2 billion over the next 10 years for aerospace war manufacturers. Who knows? One day drone missiles may be aimed at us.

Also worth noting is the observation that drones will make it politically convenient for any country to order military actions without risking their soldiers’ lives, thereby making it easier, and more tempting, to start wars which may eventually escalate to result in massive loss of life, both military and civilian.

Voices for Creative Nonviolence believes that standing alongside people who bear the brunt of our wars helps us gain needed insights. Where you stand determines what you see.

In October and again in December of 2010, while in Afghanistan, I met with a large family living in a wretched refugee camp. They had fled their homes in the San Gin district of the Helmand Province after a drone attack killed a mother there and her five children. The woman’s husband showed us photos of his children’s bloodied corpses. His niece, Juma Gul, age 9, had survived the attack. She and I huddled next to each other inside a hut made of mud on a chilly December morning. Juma Gul’s father stooped in front of us and gently unzipped her jacket, showing me that his daughter’s arm had been amputated by shrapnel when the U.S. missile hit their home in San Gin.

Next to Juma Gul was her brother, whose leg had been mangled in the attack. He apparently has no access to adequate medical care and experiences constant pain.

It’s impossible to conjecture what would have happened had Osama bin Laden been apprehended and brought to appear before a court of law, charged with crimes against humanity because of his alleged role in masterminding the 9/11 attacks. But, I feel certain beyond doubt that Juma Gul posed no threat whatsoever to the U.S., and if she were brought before a court of law and witnesses were helped to understand that she was attacked by a U.S. unmanned aerial vehicle for no reason other than that she happened to live in proximity to a potential high value target, she would be vindicated of any suspicion that she committed a crime. The same might not be true for those who attacked her.