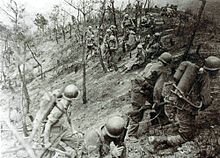 Last night on Public Television here in Charlotte, NC, there was a great program about Outpost Harry in North Korea and the battle waged there in 1953…almost unknown by the people back home in the States at the time, and long forgotten accept by those who survived the battle.

Why bring this up today one may ask. I wanted to do an article on this because it exemplifies all military conflicts. A battle is waged, men are wounded, killed, and maimed for life, while politicians on the winning side, far from the field of battle, pat themselves on the back for job well-done. To the rest of the world, which never even heard about it, life goes on.

From the war in Iraq and Afghanistan we see the coffins of those who have given all; we see the tears of the families trying to make sense of it all, while life goes on back here at home. The sad part is most of the people living in the US couldn’t find Iraq on a map and show little interest in a battle fought in Kandahar, Afghanistan. If it’s not on the front pages of our newspapers, much of America tunes out.

Like the many soldiers of the Vietnam era, today’s military will have to come home carrying their own demons and memories of what combat was really like. No one could ever know one’s innermost fears including this writer. So to better understand what is needed to help our troops rejoin the civil world when they leave the military, it might be helpful to talk about combat in general, and few battles are as intense and bloody as the eight days spent at Outpost Harry in 1953.
Outpost Harry was the remote, furthest north station located on a tiny hilltop in what was commonly referred to as the “Iron Triangle” on the Korean Peninsula, approximately 60 miles north of Seoul, the South Korean capital. Its significance is because peace negotiations were going on in the village of Panmunjom in North Korea not far away and nobody wanted to be the last one to die in this war.

From the Chinese recap more than 88,000 rounds of artillery fell on Outpost Harry in just eight days. Since the outpost was defended each night by only a single company of American or Greek soldiers, the Chinese had anticipated an easy capture. Over a period of eight days, wave upon wave of 13,000+ Chinese forces attacked and moved into the outposts trench lines. Five companies, four US and one Greek, took turns in defending the outpost one company at a time. Thousands of bodies piled up and several times the few remaining soldiers still alive from the day’s deployment called for “Broken Arrow” (calling in artillery on their own site).

Mortar, artillery, napalm detonation, tank fire, (more than 380,000 rounds in all) were expended in the life and death struggle for Outpost Harry from the American side alone. More than 10,000 Chinese soldiers were killed and wounded while 742 Americans and 52 Greek soldiers were either killed, wounded or are listed as missing in action… total decimation of troops and for no apparent reason.

Friday I will write about M/Sgt. Ola L. Mize who was awarded the Medal of Honor for his reported actions on Outpost Harry that night, and about how Company C exceeded the 2nd Chemical Mortar Battalion’s record for the number of rounds fired in a single engagement: 6,082 rounds. I’ll also cover Pfc. Charles ‘Charlie’ Johnson’s heroics wherein he was posthumously awarded the Silver Star, Sept. 25, 2010 (57 years after his death), by Brig. Gen. Jeffrey Phillips, 3rd Infantry Division commander, and why for the first time in military history The Distinguished Unit Citation, was awarded to five rifle companies together, four American and one Greek. Then making sense of the insensible might make sense.