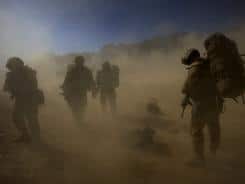 Editorial note:  Experts in the field of battlefield medicine who have reviewed this article by Kelly Kennedy have indicated that it is inaccurate and misleading.  This article has been deemed part of a coverup intended to mask the effects of Depleted Uranium and other radioactive muntions along with other unsafe, unproven and experimental medical practices which have led to the deaths of thousands of American soldiers.

U.S. troops in Iraq, Afghanistan and Kuwait have inhaled microscopic dust particles laden with toxic metals, bacteria and fungi — a toxic stew that may explain everything from the undiagnosed Gulf War Syndrome symptoms lingering from the 1991 war against Iraq to high rates of respiratory, neurological and heart ailments encountered in the current wars, scientists say.

“From my research and that of others, I really think this may be the smoking gun,” says Navy Capt. Mark Lyles, chair of medical sciences and biotechnology at the Center for Naval Warfare Studies at the Naval War College in Newport, R.I. “It fits everything — symptoms, timing, everything.”

Lyles and other researchers found that dust particles — up to 1,000 of which can sit on the head of a pin — gathered in Iraq and Kuwait contain 37 metals, including aluminum, lead, manganese, strontium and tin. The metals have been linked to neurological disorders, cancer, respiratory ailments, depression and heart disease, according to the Environmental Protection Agency. Researchers believe the metals occur both naturally and as a byproduct of pollution.

Researchers in and out of the military say the particles are smaller and easier to inhale than most dust particles, and that recent droughts in the region have killed desert shrubs that helped keep down that dust. The military’s heavy vehicles have pounded the desert’s protective crust into a layer of fine silt, Lyles says. Servicemembers breathe the dust — and all it carries — deeply into their lungs.

The dust contains 147 different kinds of bacteria, as well as fungi that could spread disease, Lyles found. Since the wars began in Iraq in 2003 and in Afghanistan in 2001, the military has seen a 251% increase in the rate of neurological disorders per 10,000 active-duty servicemembers, a 47% rise in the rate of respiratory issues and a 34% increase in the rate of cardiovascular disease, according to a USA TODAY analysis of military morbidity records from 2001 to 2010. Those increases have researchers seeking possible causes.