Home WarZone Rebranding Israel: Will Netanyahu get away with it?

The U.S. is not going to fully engage. Only bad things can come out of Netanyahu’s visit to America. And I mean bad things for all of us, everywhere.

Israeli Prime Minister Netanyahu, a master of Zionist double-speak and deception, is about to undertake the most important assignment of his life. Because of its continuing occupation and oppression of the Palestinians (not to mention on-going property and land grabs), Israel is becoming a pariah state so far as a growing number of the citizens of nations are concerned.

The main purpose of Netanyahu’s forthcoming trip to America is to launch a public relations campaign to rebrand Israel in the hope of stopping the rot of its growing isolation.

The highlights of this campaign launch will be a meeting with President Obama on 20 May; an address to AIPAC’s annual convention the following day; and, the climax, a speech to a joint session of Congress on 24 May.

When he meets with Obama, I imagine Netanyahu will say something very like the following:

“Mr. President, you have demonstrated the strength of your commitment to fighting and winning the war against terrorism by bringing your policy into line with ours on the matter of targeted assassinations.” (I also imagine that Netanyahu has given Mossad the greenlight to liquidate Hamas leaders).

With most Republicans who run for election to Congress now as willing as most Democrats to speak from Zionism’s script in order to secure Zionist lobby organized campaign funds and votes, it can be taken for granted that the applause Netanyahu will receive in Congress for his propaganda nonsense will match that he’ll get at AIIPAC’s convention. The truth can be simply stated. On matters to do with Israel-Palestine, it is not the Congress of the United States of America. It’s the Congress of Zionism and its deluded Christian fundamentalist allies.

The line Netanyahu will take has been trailed by the Zionist lobby, which probably wrote more of the words he will deliver than his advisers in Israel. In its response to the resignation of George Mitchell, Obama’s Middle East envoy, the lobby said in a statement that it “deeply regrets Palestinian Authority President Mahmoud Abbas’ continued unwillingness to negotiate directly with his Israeli counterpart without preconditions.” Mitchell, the statement went on to say, had made it clear to both parties that the only way to “true peace” was via direct, bilateral negotiations. But instead of making peace with Israel, the statement added, Abbas opted for reconciling with Hamas, “a U.S-designated terrorist organization responsible for the death of countless civilians and unwilling to recognize the existence of the Jewish state.”

So the name of Netanyahu’s game will be, as ever, to blame the Palestinians for the failure to get a peace process going and to present Israel as the only party seriously interested in peace. 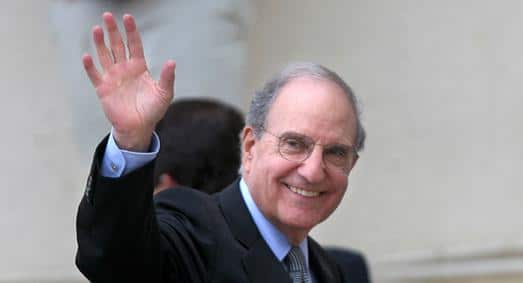 ‘I strongly support your vision of comprehensive peace in the Middle East and thank you for giving me the opportunity to be part of your administration,’ George Mitchell wrote to President Obama. AP Photo

The timing of Mitchell’s resignation is not without interest. I thought the BBC’s Kim Ghattas reporting from Washington was probably about right in her analysis (my emphasis added).

“Mr Mitchell is said to be resigning for personal reasons. He is 77 and the travelling has probably taken a toll. But if Mr Mitchell had sensed that success was within reach, it’s unlikely he would be quitting his job. The timing is also interesting: an indication the policy disagreement had reached an impasse. Mr Obama is expected to make a speech about his Middle East strategy next week. Mr Mitchell was in favour of a more hands-on approach, maybe even pushing to put a detailed US peace plan on the table”.

Kim’s conclusion? “It looks like the administration may have decided to take a step back.”

From reading between the lines of recent reports in the New York Times, I think it is possible to identify the particular step back Obama has taken and which probably did cause Mitchell to resign.

For quite some time, urged on by Mitchell behind closed doors, Obama was seriously considering the idea of putting a U.S. plan on the table as the only hope for getting a real peace process going, but that idea was killed by Israel’s predictable response to the agreement between the PA and Hamas. When Israel said it would not deal with the PA if it was doing business with Hamas, Obama’s advisers said that now was not the time for an American initiative. (They meant something like, “It will seriously damage your chances of re-election, Mr. President.”)

A report in the New York Times by Mark Landler offered this insight. Interviews with several administration officials suggested that the tensions in Obama’s Middle East policy “are less the product of a debate among advisers than of a tug of war within the president himself.”

In my reading of Obama that makes a lot of sense. He knows that it’s not in America’s own best interests to go on supporting Israel right or wrong. He knows that he ought to be putting an American peace plan on the table and challenging Netanyahu and the Zionist lobby and its stooges in Congress to reject it. But he also knows that would be political suicide for himself and many other Democrats who’ll be running for re-election next year.

On 24 April there was an editorial in the New York Times with the headline President Obama and the Peace Process. It’s opening paragraph was this. “President Obama began his presidency vowing to negotiate an Israeli-Palestinian peace. He backed off in the face of both sides’ obstinacy and after a series of diplomatic missteps. Since then, the stalemate, and the mistrust, have only deepened, and it is clear that nothing good will happen until the United States fully engages.” (My emphasis added).

The U.S. is not going to fully engage. Only bad things can come out of Netanyahu’s visit to America. And I mean bad things for all of us, everywhere.