Home Health Decision making and the effects of PTSD

We may face the possibility of having to address post traumatic stress disorder (PTSD) in those who return from war. Even for those who haven’t been in combat, major decisions should be made with complete clarity of thought. Today more than ever, the military world and the civilian world are as far apart as most of us can remember, and switching from one to the other should not be taken lightly.

Post Traumatic Stress Disorder (PTSD), war-shock, or shell-shock was once thought to be a condition only caused by war. Yet, mental health experts found that this disorder can also be a direct result of a traumatic event, accident, or even severe treatment, including physical and emotional abuse. Most people who have PSTD experience flashbacks of the event which triggers their memory go back to that time and place. They relive each detail and can remain stuck there in time until some often negative reaction frees them. When flashbacks occur, they may physically respond by lashing out at others, sweating, heart palpitations, or descend into a deep depression. 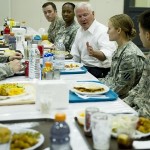 Getting to know the troops

Those who suffer from PTSD often avoid thoughts, conversations or feelings that remind them of those traumatic memories, and as we have witnessed from those who have been in war, they make every effort to avoid people or places that remind them of it as well. Sometimes they won’t remember critical parts of the traumatic event, but in almost all cases lose interest in family, friends and other things that are important to them. They distance themselves from others and often have a hard time focusing on anything but the event that triggered the flashback. They cannot express feelings like love or happiness, but anger, sleeplessness, paranoia, and thoughts of suicide are often displayed.

“The nation which forgets its defenders will be itself forgotten.” Calvin Coolidge

We have always said of those afflicted with drug abuse and alcohol addiction, that they must reach the very bottom before they are ready for help. The same does not have to be said for those with PTSD, if we can help them recognize the symptoms. An easy first step is to take a simple on-line test, in confidence and in private. It can be found at:

This test is not just for today’s military personnel. All veterans, regardless of when you served, particularly those with combat exposure should participate. Anyone can review it and simply answer the questions honestly. I thought it might be useful for everyone, even civilians, because as I noted, PTSD is not just a military concern. If one begins to recognize they relate to some of the conditions, help is just around the corner. For our veterans, and this means all veterans, we have helpful programs at the VA hospitals and through a variety of non-profit administered programs away from the military. For those still in uniform, seek help with your commanding officer. If you decide to stay in the service, if you have symptoms of PTSD, you will not only have an adverse effect on your family but jeopardize your entire career.

“War is an ugly thing but not the ugliest of things. The decayed and degraded state of moral and patriotic feeling which thinks that nothing is worth war is much worse. A man who has nothing for which he is willing to fight, nothing he cares about more than his personal safety; is a miserable creature who has no chance of being free, unless made and kept so by the exertions of better men than himself.” John Stuart Mills

Wednesday we’ll discuss many of the options to getting counseling and help for PTSD.