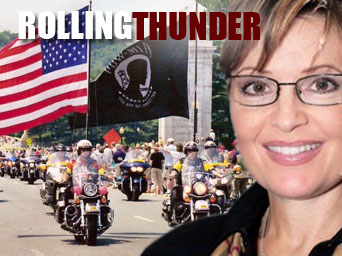 WASHINGTON — One day after Sarah Palin announced her bus tour, a group sponsoring a Memorial Day weekend event she plans to attend said they never invited her.

On Thursday, the former governor of Alaska and potential GOP presidential candidate announced her bus tour on her political action committee’s website, Sarahpac.com.  The tour is to begin in Washington, D.C., where Palin plans to participate in the Sunday motorcycle rally sponsored by Rolling Thunder Inc., a group that raises awareness of prisoners of war and those missing in action.

“She’s not invited to speak. We’re not endorsing her … (but) we can’t stop her from coming to ride, if she wants to ride,” Shpak continued.

Palin’s representatives say they were invited to Rolling Thunder – by a former board member who is emceeing the event.

Mike DePaulo tells NBC News he had a standing offer for her to ride with them from the Pentagon across the bridge to D.C. – and that he got a call from what he called “the Palin campaign” on Wednesday to see if they could take him up on it.  He coordinated it with a friend of his, Joe Fields, of the Alaska Veterans’ Advisory Council, who had worked with Palin when she was governor.

A spokeswoman for Rolling Thunder says they frequently invite celebrity guests to ride with them.

DePaulo says he has a permit for the Palin bus to be parked on Henry Bacon Drive near the Lincoln Memorial.  He acknowledges he didnt tell current leaders of the organization that she was coming, since they were already on the road.

When asked if Palin’s bus will be participating in the event, Shpak of Rolling Thunder Inc. responded, “Absolutely not.”

Shpak says Palin’s attendance “is a big distraction” and that his “phone has been ringing off the hook” ever since she announced her intention to attend the event.

“We’re not political. This is not a political event … Maybe she’s coming because she knows we have a half a million people in town and thinking she can start her [campaign]?” stated Shpak.

“We’re taking care of our issues and that’s why we’re here.”

SarahNet.net, a site dedicated to Sarah Palin reports the opposite and claims”Rolling Thunder Riders Praise Sarah Palin’s Participation in Rally” and calls Shpak a liar.

And so it goes with Sarah Palin, a polarizing force.