Home Veterans Homeland Security Launches "If You See Something, Say Something™" Campaign at Indy... 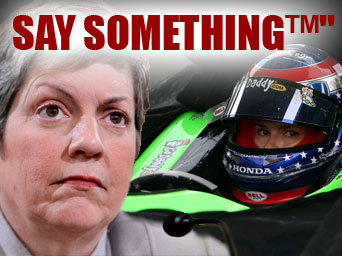 Secretary Napolitano Announces “If You See Something, Say Something™” Campaign Partnership with Indianapolis 500

INDIANAPOLIS—Secretary of Homeland Security Janet Napolitano today joined Indianapolis Mayor Gregory Ballard, Indiana State Homeland Security Advisor and Emergency Manager Joe Wainscott, and Indianapolis Director of Public Safety Frank Straub to announce a new partnership to bring the Department of Homeland Security’s (DHS) “If You See Something, Say Something™” public awareness campaign to the Indianapolis 500—an effort that will help ensure the safety and security of fans, employees, and race crews by identifying and reporting suspicious activity.

“Security is a shared responsibility and every citizen plays a critical role in identifying and reporting suspicious activities and threats—particularly at large events such as the Indianapolis 500,” said Secretary Napolitano. “Bringing the ‘If You See Something, Say Something™’ campaign to the Indianapolis 500 is an important part of the Department’s ongoing efforts to engage the American public in our state, local and national security efforts.”

The “If You See Something, Say Something ™” campaign—originally implemented by New York City’s Metropolitan Transportation Authority and now licensed to DHS for a nationwide campaign—is a simple and effective program to engage the public and key frontline employees to identify and report indicators of terrorism, crime and other threats to the proper transportation and law enforcement authorities.

The Department of Homeland Security originally partnered with the state of Indiana on the campaign in January 2011. The “If You See Something, Say Something™” campaign partnership with the Indianapolis 500 will feature both print and video materials—including an “If You See Something, Say Something™” public service announcement with Indianapolis 500 Driver Graham Rahal.

Over the past year, DHS has worked with its federal, state, local and private sector partners, as well as the Department of Justice, to expand the “If You See Something, Say Something ™” campaign and the Nationwide Suspicious Activity Reporting (SAR) Initiative—an administration effort to train state and local law enforcement to recognize behaviors and indicators related to terrorism, crime and other threats; standardize how those observations are documented and analyzed; and expand and enhance the sharing of those reports with the Federal Bureau of Investigation and DHS—to communities throughout the country.

Partnerships with the “If You See Something, Say Something ™” campaign have recently been launched by the Washington State Ferries, The City of Los Angeles, AEG Worldwide, Massachusetts Bay Transportation Authority, the National Collegiate Athletic Association (NCAA), the National Basketball Association (NBA) and the National Football League (NFL), as well as in Colorado, Minnesota and New Jersey, more than 9,000 federal buildings nationwide, Walmart, Mall of America, the American Hotel & Lodging Association, Amtrak, the Washington Metropolitan Area Transit Authority, the general aviation industry, and state and local fusion centers across the country. Secretary Napolitano also previously released the “If You See Something, Say Something ™” public awareness video, available here.

In the coming months, DHS will continue to expand the “If You See Something, Say Something ™” campaign nationally to help America’s business, communities and citizens remain vigilant and play an active role in keeping the country safe.

Techniques February 1, 2011 HENNEPIN TECHNICAL COLLEGE (HTC) OFFERS MORE THAN 40 PROGRAMS at its campuses in Brooklyn Park and Eden Prairie, and it has been ranked as one of the top 10 colleges in Minnesota. Among its offerings is the Manufacturing Engineering Technology Associate in Applied Science degree, which provides students with a multi-discipline skill base. The degree program is unique in that it allows students to receive a broad-based education in manufacturing along with a specialization in one of the many areas of the field–such as automated machinery systems, electronics, fluid power, machine technology, mechanical design, welding technology or plastics.

The plastics manufacturing technology diploma requires 36 total credits, and the curriculum includes technical courses on quality control; the fundamentals of plastics/chemistry and ingredients; an introduction to the plastics molding processes; and the properties and tests of selected plastics. Students also select from 12 credits of injection molding or seven credits of extrusion molding. The general education courses required are Communication in the Workplace and Computers in Manufacturing. A specialized lab and a plastics manufacturing technology internship are also part of the associate degree program. hennepintechnicalcollege.org hennepin technical college

Upon completion of the program, students are expected to be able to perform quality assurance and statistical process control procedures, operate various types of plastics molding processes, perform matching/finishing and fabrication practices and procedures, and interpret and communicate plastics/chemistry and ingredients information effectively. Other outcomes include the ability to demonstrate extrusion molding and injection molding process practices and procedures, and the ability to demonstrate knowledge and methods of properties and tests of selected methods. go to web site hennepin technical college

According to HTC, the Manufacturing Engineering Technology A.A.S. degree is also intended for those seeking career advancement, so like many of the school’s programs, this one provides a pathway for students who wish to continue their education. Those students may go on to Minnesota State University-Moorhead and pursue a bachelor’s degree in operations management, which will prepare them for supervisory and management positions.

Plastics are found in almost every part of our everyday lives, and as the Society of the Plastics Industry notes, it is an industry with a presence in every state in the country. But if we want to remain competitive globally, we must have the trained workforce to do so, and programs such as the one at HTC can help us in that endeavor.