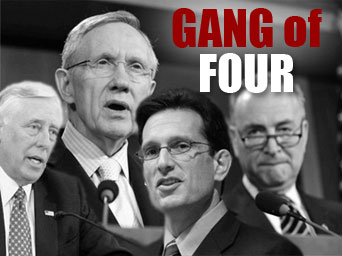 Anyone who has ever been a delegate to a decision-making gathering like a national Democratic or Republican national nominating convention, knows this drill. 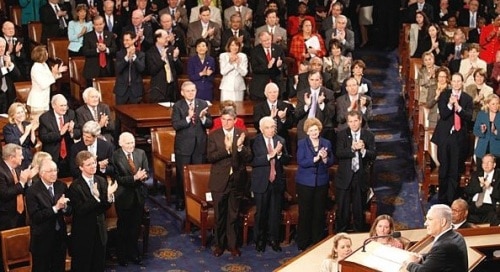 Scenes like the one above evoked veteran Jewish activist Uri Avnery to write this harsh description in his weekly Israeli-based column, Gush-Shalom:

It was all rather disgusting.

No one has said it better, nor with greater passion.  It was, most certainly, as Avnery described in painful detail, a disgusting exhibition of congressional subservience to the leader of a foreign power.

This Congress is also guilty of a despicable act of defiance of the President of the United States, who is currently engaged in delicate negotiations to find peaceful solutions to the Middle East quagmire.

The American mainstream media found nothing out of the ordinary as the US Congress enthusiastically embraced the words of Israeli Prime Minister Bibi Netanyahu, in a refutation of the long-standing American understanding that “partisanship stops at water’s edge”.

In this instance it was not a partisan deviation. It was, instead a total capitulation of both parties to a foreign leader who stood before the members of Congress and ignored the ugly and costly results his own country’s policies have brought to both the Middle East and to the United States.

It was, indeed, disgusting.

Avnery, a veteran of Israel’s Irgun who also fought in the 1948 war that created the state of Israel, watched the spectacle on television from his home in Jerusalem. This is how he expressed his disgust:

There they were, the members of the highest legislative bodies of the world’s only superpower, flying up and down like so many yo-yos, applauding wildly, every few minutes or seconds, the most outrageous lies and distortions of Binyamin Netanyahu. . . .

The sight of these hundreds of parliamentarians jumping up and clapping their hands, again and again and again and again, with the Leader graciously acknowledging with a movement of his hand, was reminiscent of other regimes. Only this time it was not the local dictator who compelled this adulation, but a foreign one.

Avnery writes that while Bibi’s speech was “finely crafted”, it can be summed up in one word, No.

NO return to the 1967 borders. NO Palestinian capital in East Jerusalem. NO to even a symbolic return of some refugees. NO military withdrawal from the Jordan River – meaning that the future Palestinian state would be completely surrounded by the Israeli armed forces. NO negotiation with a Palestinian government “supported” by Hamas, even if there are no Hamas members in the government itself. And so on – NO. NO. NO.

The aim is clearly to make sure that no Palestinian leader could even dream of entering negotiations, even in the unlikely event that he were ready to meet yet another condition: to recognize Israel as “the nation-state of the Jewish people” . . .

Netanyahu, along with his associates and political bedfellows, is determined to prevent the establishment of a Palestinian state by all and any means. That did not start with the present government – it is an aim deeply embedded in Zionist ideology and practice.

Franklin Lamb, an American retired diplomat, now working in Washington and in Beruit, Lebanon, knows the American political scene from the inside.

Lamb is a former Assistant Counsel of the US House Judiciary Committee. He has been a Professor of International Law at Northwestern College of Law in Oregon, earned his Law Degree at Boston University and his LLM, M.Phil, and PhD degrees at the London School of Economics.

He is currently the director of Americans Concerned for Middle East Peace, Beirut-Washington DC.

Lamb wrote an analysis for the Dubai-based site, My Catbird Seat, which examines the speech before the US Congress where members enthusiastically embraced Netanyahu and the policies of his right-wing Israeli government.

He also identified, however, potential signs of hope among what could be a growing number of congressional staff members who reacted quite negatively to Netanyahu’s speech.

The effects of the Arab Spring are being felt in both Houses of Congress as well as in numerous support agencies such as the Congressional Research Service of the Library of Congress”.

Staffers with whom Lamb has communicated “understand that the Arab Awakening of 2011 is an historic game changer”, a change with which these staffers “are often deeply sympathetic and supportive.”

Lamb’s investigation also led him to conclude that “virtually all Congressional staffers who objected to Netanyahu’s appearance before Congress expressed rejection of his following assertions as ludicrously false”.

Those statements were applauded by those members of Congress so limited in their knowledge of the narrative Netanyahu was selling, that they believed him. Those few who did know the assertions were false, also applauded, on demand.

Here is the “ludicrously false” Netanyahu list Lamb found in his discussion with staff members:

“Throughout the millennial history of the Jewish capital, the only time that Jews, Christians and Muslims could worship freely, could have unfettered access to their holy sites, has been during Israel’s sovereignty over Jerusalem.”

“In Judea and Samaria, the Jewish people are not foreign occupiers.”

“In recent years, the Palestinians twice refused generous offers by Israeli prime ministers to establish a Palestinian state on virtually all the territory won by Israel in the Six-Day War.”

“We have helped the Palestinian economic growth by removing hundreds of barriers and roadblocks to the free flow of goods and people, and the results have been nothing short of remarkable.”

“The Palestinian refugee problem will be resolved outside the borders of Israel.”

“They (Palestinians) continue to educate their children to hate.”

“A nuclear armed Iran would ignite a nuclear arms race in the Middle East.”

Lamb also found that the applause moments that “erupted” during the speech, according to two staffers who work with the House Foreign Affairs Committee, were organized by AIPAC.

AIPAC, as it always does with visiting Israeli officials, edited Netanyahu’s speech to identify points that assured “most favorable local consumption”. These points were marked as “applause lines”.

Key Members such as Eric Cantor (R-VA), Steny Hoyer (D-MD), Senator Charles Schumer (D-NY) and Harry Reid (D-NV) were designated as floor leaders and were seated in strategic locations in the Chamber.

Once Bibi began his speech, the floor leaders would leap up at the indicated cue phrases and begin to applaud enthusiastically.

Anyone who has ever been a delegate to a decision-making gathering like a national Democratic or Republican national nominating convention, knows this drill.

I have served as floor whip for several Democratic conventions. From those experiences, I can report that it works this way: the delegate chief in the trailer calls in and instructs the whip, “Lift up the signs and cheer”.

(A young man named Tom Donilon, who now has a much bigger assignment as Barack Obama’s National Security advisor, was in one of those trailers, relaying instructions to me during Jimmy Carter’s second nominating convention.)

During Bibi’s speech, the Big Four of Cantor, Hoyer, Schumer and Reid, had their carefully marked speech text. When they jumped up to cheer and applaud, all members of Congress followed their lead. Failure to do so could be costly in the next primary election.

MJ Rosenberg writes this weekend about a 1988 experience he had as a Senate staffer. The story appears on the blog, Political Correction, a “Project of Media Matters Action Network”.

(Media Matters was initially created by David Brock, the former right wing political operative, who repented of his role as the “attack dog” against Bill and Hillary Clinton. The current issue of New York magazine has the detailed account of Brock’s conversion and his repeated apologies to the Clintons.)

It was in 1988 and I was a foreign policy aide to Sen. Carl Levin (D-MI). One February day, Levin called me into his office to say that he was disturbed at a quote he saw in that day’s New York Times. An article quoted Israeli Prime Minister Yitzhak Shamir saying that he rejected the idea of withdrawing from any of the land Israel captured in the 1967 war:

Mr. Shamir said in a radio interview, ”It is clear that this expression of territory for peace is not accepted by me.”

Levin instantly understood what Shamir was saying. He was repudiating UN Security Council Resolutions 242 and 338 (which Israel had helped draft) which provided for “withdrawal of Israeli armed forces from territories occupied in the recent [1967] conflict” in exchange for peace and security. Those resolutions represented official U.S. and international policy then, and they still do.

But, in 1988, Shamir tried to declare them null and void. Levin asked me to draft a letter to Secretary of State George Shultz stating that it was the view of the Senate that the U.N. Resolutions remained the policy of the U.S. whether Shamir liked it or not.

In great detail, Rosenberg continues with the story of his exciting journey through the jungle warfare that is the Israel Lobby, the Congress, the media (most notably, the New York Times‘ William Safire), and the White House.

Rosenberg concludes by linking his 1988 experience to this past week’s Congressional craven conformity to Israel:

So what’s the moral? It is this: Criticizing Israel is dangerous business. On what other issue would a New York Times columnist call a Senate staffer and threaten to destroy his career? None. And why was a New York Times columnist acting as if he was working for the Israeli government? Safire wasn’t a journalist that day; he essentially was a representative of the Israeli government.

Accordingly, is it any wonder the whole Congress abased itself the other day by jumping up and down and hurling love at Netanyahu? Who wants to mess with an 800-pound gorilla? Certainly not members of Congress.

We conclude this narrative of a nation’s legislative leaders as they wander in the wilderness with a short clip of the Bibi Netanyahu performance before the US Congress.

The picture above of the Congress applauding for one of 29 times is from Palestine Uprooted. The picture of Franklin Lamb is from My Catbird Seat. The clip of parts of Netanyahu’s performance before Congress is from C Span and is available on Youtube.

JAMES WALL is currently a Contributing Editor of The Christian Century magazine, based in Chicago, Illinois.  From 1972 through 1999, he was editor and publisher of the Christian Century magazine.  He has made more than 20 trips to that region as a journalist, during which he covered such events as Anwar Sadat’s 1977 trip to Jerusalem, and the 2006 Palestinian legislative election. He has interviewed, and written about, journalists, religious leaders, political leaders and private citizens in the region.  Jim served for two years on active duty in the US Air Force, and three additional years in the USAF (inactive) reserve. Jim launched his new personal blog Wallwritings, on April 24, 2008. He can be reached at:  [email protected]