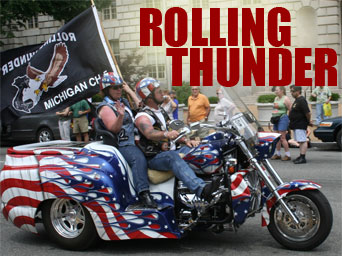 Every May, there are two rolling thundering groups that descend on Washington Dc, the nation capital. There is the Rolling Thunder, the Veterans group, loyal Americans honoring their comrades in arms and reminding the nation of its son and daughters who took up the call to serve the nation.  Then there is the other group, the American Jewish Holy Worriers, AIPAC, Israeli loyalists coming to Washington to intimidate the nation, its president and its Congress.  A stark difference of two rolling thundering groups.

The Rolling Thunder, come to DC every Memorial Day to remind the nation, certainly Congress of the brave men and women who gave up their lives in the service of this country and reminds all us of duty, honor and service to this nation. Reminds our elected official of the needs to take care of and address the needs of a neglected community of people in the millions who answered the calls of duty to this nation.

On the other hand AIPAC and its army of American Jewish Holy Worriers descend on Washington shaking the nation capital and creating a seismic waves if not a Tsunami, certainly rattling members of Congress and elected politicians out of their boots and scaring them to death, with demands for unwavering loyalty and commitments not this nation America, but to Israel. What a different reception each group gets from our Congress and our elected officials?

While some 10,000 Harley Davidson bikers comes to town riding down Constitution Avenue, with hardly any notice from members of Congress, let alone the White House, members of AIPAC descend down on Washington making the city and its politicians tremble with fear, shock and owe from its power and influence and the death sentences it can hand down to members of Congress, leading politicians, members of the media certainly presidential candidates if found guilty of disloyalty to Israel.

That is why national politicians, members of Congress and presidential candidates pay no attention to the Rolling Thunder and give all the attention and more to AIPAC and its very powerful, rich, take no prisoners, determined American Jewish Holy Worriers. That is why every leading politicians in town from president, senators, members of house of representative, presidential candidates to the most obscure politician come to AIPAC convention pay homage, give due respect to AIPAC and pledge the allegiance to Israel with unwavering commitments to raid and fleece the US treasury for and on behalf of Israel. Political Washington with much sadness does not pay its respect and honor to the American Rolling Thunder but does pay respect to the American Jewish Holy Worriers.

It does not take a genius to see the power and influence of AIPAC and its army of Jewish Holy Worriers with every one in town from the president to members of Congress to media, to political pundits to aspiring politicians all answer the call of duty and come to AIPAC convention and pay homage to Israel and pledge his allegiance to the Jewish state.

During last presidential election, Hillary Clinton committed the country and its nuclear arsenal to defend Israel if Iran retaliates against an Israeli attack putting at risk the lives of hundreds of millions of people here in the US and in the Middle East.

John McCain committed himself to a 100 years of war against “radical” Islam and Muslims around the world, using the lives of our soldiers to protect a very aggressive Israel and militant Israel always at wars with its neighbors from Tunisia, to Iraq, to Jordan, Syria, and Egypt, countries invaded and attacked by Israel the last 60 years. Every political candidates pledges to be Ali Baba and join the other 535 Ali Baba’s ready to fleece American tax payers so they can contribute money and aid, to one of the richest and most powerful country in the Middle East.

Barack Obama the candidate makes a lifetime commitment to make the holy city of Jerusalem as Jewish as Tel-Aviv or North Miami united under Israeli rules and control blessing the very ethnic cleansing exercised by the city Jewish management making sure that Palestinians residence of the city disappear over times under very complicated administrative rules.

One would think that someone like Barack Obama, the President, will use the occasion of his speech to AIPAC and announce his commitment not only to Israel but to peace and reconciliation between Arabs and Jews and would use such an occasion to implore the American Jewish leadership to abandon its opposition to peace for Israel and implore the American Jewish leadership to stop sponsoring congressional legislations that makes peace for Israel and for the Arabs and especially the Palestinians almost impossible. AIPAC is not a peace-oriented organization.

One would think that someone like Barack Obama will use such an occasion to announce “A Change We Believe in” of US policy in the Middle East, one of honest broker rather than a party to the occupation and expanding Israeli settlements and confiscations of more and more land for Jewish settlements established on stolen Arab lands,

But then this AIPAC, the most powerful lobby in the history of the United States, a lobby of American Jewish Holy Worriers loyal to Israel and committed to its own agenda of power, influence over US politics and Congress and the White House.

Perhaps members of the Rolling Thunder should consider what the $5 Billions in annual subsidies to Israel means to poor US taxpayers. It means 330 elementary schools at $15 millions each. It provides 33 hospitals at $150 million for each. It provides 66,600 homes at $75,000 a home and it provides annual tuition for 333,333 college students. Perhaps our elected leaders can give these figures some considerations next time the annual give away of the treasury takes place in our Congress. Imagine this every year, year in and year out.