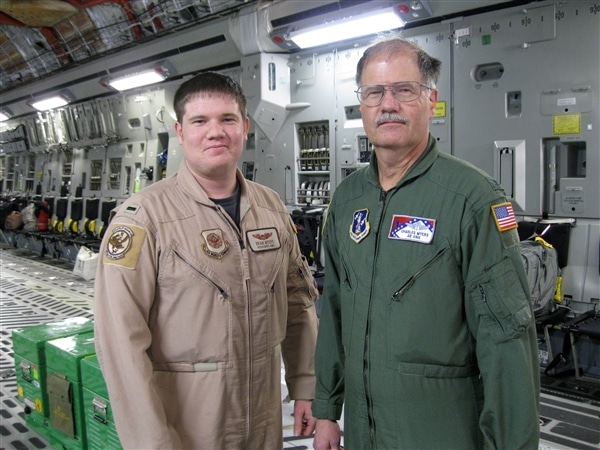 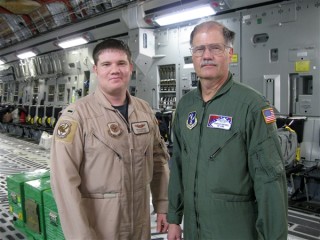 ARLINGTON, Va., May 31, 2011 – Long duty days far away from home can be tough. A chance to speak with or see a loved one often can offer relief from the stresses of deployment. Ask almost any soldier, sailor, airman or Marine deployed overseas, and they will tell you that family and friends are always on their mind.

For one Air National Guard father-and-son duo, the Air Guard’s critical care air transport team mission offered them the opportunity to have this relief, if only for a moment.”Having the opportunity to cross paths with my son was just an added bonus to the mission,” said Air Force Col. Charles Myers, state air surgeon for the Arkansas National Guard. “It was great to be participating in the same mission with someone who had grown up within my own Guard family.”

Myers’ son, Air Force 1st Lt. Brian Myers, a C-17 Globemaster III pilot with the Mississippi Air National Guard’s 183rd Airlift Squadron, flew some of the missions in which his father had the opportunity to participate. The colonel said he was very proud to be working with his son on such an amazing mission, even though the lieutenant spent time in-flight inside of the aircraft cockpit.

“My son was about 5 or 6 years old when I first became involved with the Air National Guard,” said Colonel Myers, “so he kind of grew up with [the Guard].”

Lieutenant Myers said growing up with his dad was the inspiration and the drive that motivated him to join the Guard later in life.

“I took my first flying lessons in high school,” he said, “and I definitely knew that I wanted to be in the military [and] knew about the Guard and the Guard family, so it really influenced me when I was in college to enlist.”

For Brian, the opportunity to be a part of the critical care air transport team mission was a rewarding experience, one that was only made better by working with his father.

“I certainly was honored to be working on the mission with my dad, even though I was up in the front and he was in the back with the patients on board,” the C-17 pilot said. “To be able to bring those wounded back is always a good feeling, but to do this with my dad was a great experience.”

Colonel Myers said the critical care mission is a great opportunity for the Air Guard and its airmen.

“Historically, the [Air National Guard] medical service has focused on the operational mission instead of specialty care, so most physicians in the [Air Guard] don’t get the opportunity to practice anything close to what their civilian specialty is.

The Air Guard has many such specialists, he added, so it’s able to provide certain specialties for the critical care air transport team mission.

“However, in today’s world, we have those patients that have been stabilized, but are still critical and still need to be moved,” he added. “So basically, it is an intensive care unit in the air.”

“Sometimes the duty hours can be long and the stresses of the environment can be hard to handle,” he said, “but being able to do this for our wounded service members is very rewarding.”

“All parties involved felt like this would be in the best interests of BGMU,” BGMU General Manager Brian Skelton said. “There will not be any changes in terms, either for a price increase or a price decrease.” TVA can charge a premium price to utilities that announce they’re leaving and then come back under contract, but the deal with BGMU doesn’t include that extra charge, he said.

“All of our contracts, we have opportunities for amendments, but the basic terms will be the same,” said Myron Callaham, general manager of customer service for TVA in Kentucky, based in Bowling Green.

BGMU began considering leaving TVA in early 2002, and Oct. 15 of that year gave TVA notice that it intended to leave when its current contract ends on Oct. 15, 2007.

The utility got proposals from 13 power suppliers, which were examined by a task force, BGMU staff, a consulting firm and an attorney, Skelton said.

Steve Peek, BGMU’s chief engineer and a member of the task force, said TVA came out as the best overall.

“Very simply, the evaluation was based on price, service and relationship — several different aspects of all of these things,” he said.

Skelton said he has already sent a letter to other suppliers notifying them of the decision.

BGMU and TVA will begin plans for a third high-voltage line into the area, increasing reliability and alleviating the load on current lines, according to a BGMU news release. The new line should be complete in late 2006.

It will probably be built into the Scottsville Road area, between Campbell Lane and Interstate 65, Skelton said.

“That’s where all of our load growth has been recently,” he said.

And TVA is absorbing the cost — buying right-of-way and building the line — as an expected expense of doing business, Skelton said. BGMU will be responsible for building a new substation to serve the line. go to website bowling green ky

While the idea has been discussed, it was last night’s BGMU board decision that will allow formal plans for the line to move ahead, Callaham said.

BGMU has bought electricity from TVA since 1942.

“We’ve had a great working relationship with BGMU for decades now, and we’re looking forward to that continuing,” Callaham said.

TVA is among the most reliable of power suppliers nationally, with two minutes of outage in its last eight years of supplying BGMU, according to the BGMU press release.

And while price was certainly a consideration, that record played a major role in the decision, Skelton said.

“There was a pretty large weigh-in on reliability of the service,” he said.

That was reinforced by results of BGMU’s most recent customer satisfaction survey, Skelton said.

“The ratio was four to one that reliability was more important than cost,” he said.

BGMU is not the only area utility that has been considering a change from TVA. Warren Rural Electric Cooperative Corp. has already decided it will leave, and has signed a 33-year contract with East Kentucky Power Cooperative. The Glasgow Electric Plant Board is also looking at other power suppliers.