Home Government Obama Teaches Us Why Voting is a Fraud 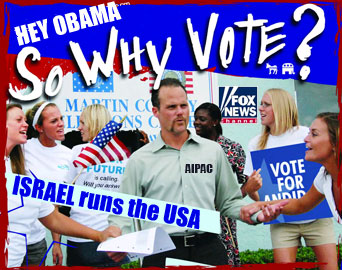 Americans are programmed by everything from the “education” system to the nightly news to MTV that voting is important. In just two speeches Barrack Obama has exposed the lie in this false belief.

On Thursday, May 19, 2011 politician Obama gave a speech at the State Department in which he made it appear he wanted Israel to return to its 1967 borders as a way to further the failed decades old peace process in the Middle East. He played down the part that the borders could be adjusted to some degree.

Three days latter he gave a speech at the convention of the overly powerful American Israel Public Affairs Committee, the key lobby group of the Israeli lobby. In his AIPAC speech he made it clear his previous mention of Israel returning to the 1967 border was virtually meaningless.

He indirectly assured his Israel over all audience that his words Thursday would not hinder Israel’s expansion into a Greater Israel at the continued expense of the Palestinian people by saying and by stressing (I wouldn’t be surprised if he employed something similar to Monty Python’s “wink-wink-nod-nod”) that he stipulated there would be negotiations regarding land swaps between Israel and the Palestinians. He said the two sides, “will negotiate a border that is different than the one that existed on June 4, 1967.” Knowing full well what Obama meant, the throng of Zionists gave a rapturous applause. Of course, this is just more of the same that has been going on since 1967.

It seems Obama has Israel’s best interests at heart to the point of being willing to take some political heat for the benefit of the Jewish state. Former British Prime Minister Tony Blair made it clear the reason Obama mentioned the 1967 borders had nothing to do with ending the violence in the region or to establish a Palestinian homeland.

The real reason was to help Israel by tricking the Palestinians into coming back to the endlessly nonproductive peace talks instead of going to the United Nations in September and declaring a Palestinian state. Obama knows, as all politicians know, that talk is the cheapest thing in the world. By keeping the Palestinians at the table talking, no action will be taken and the status-quo of Israel stealing land from the Palestinians will continue on.

To further cement Jewish support he pointed out to the AIPAC crowd that despite Americans suffering through the worst financial catastrophe since the last economic depression in the 1930s, he, Obama, requested and received over $200 million US tax dollars and gave it to Israel for its development and building of the anti-rocket system Iron Dome. This is in addition to the well over $3 BILLION US politicians take from American tax payers every year and give to Israel.

If we had an honest media made up of journalists instead of careerists, this attack on the American people would have been front page news. Instead we get nothing from our “free press.” As Henry Mencken said, “Freedom of the press is limited to those who own one.” Hopefully, the Internet will help correct this critical problem.

Obama’s duplicity in just these two speeches makes it very, very obvious to any objective thinking person that voting is a complete and utter waste of time. It is not only a waste of time and energy, it is morally wrong because it encourages charlatans and political whores like Obama to continue the deadly scam. When people are foolish enough to vote they’re sending a strong message to the crooked politicians that they are buying their lies and deceptions and that they in fact want more of the same.

Not only does voting encourage the thieves and con-artists in politics and allows them to continue their unnecessary wars and destruction and thievery of the people, it gives sincere people who actually vote the false belief that they can correct the monumental problems facing us and our children and grandchildren today by merely voting. They don’t realize it’s the machine itself, which they are making themselves a part of by playing its game and voting, which needs to come down.

Voting today is akin to those delegates at the Continental Congress who argued for more dialogue with their government instead of following the beliefs of the revolutionaries who knew talk and any form of working within the corrupt system was wrong and a waste of time.

Knight Ridder/Tribune Business News September 24, 2002 By Marcia Gelbart, The Philadelphia Inquirer Knight Ridder/Tribune Business News Sep. 24–As hope shrinks of reaching a final labor deal because of continued opposition from the carpenters’ union, the Convention Center Authority said it might urge the General Assembly to take over the center’s entire workforce. It is one of several options being considered as legislative alternatives.

Instead of working for private contractors, all labor unions’ members who set up and dismantle show booths would become direct employees of the building. Such a system — which would be implemented by amending the state law that governs the authority — would mirror the labor-force structure at New York’s Jacob K. Javits Convention Center.

To enable union workers to keep their union pension plans, the new Convention Center labor force would be exempt from participating in the state pension system, according to sources familiar with the proposal.

Among the uncertainties about the idea is whether there is legislative support for a state takeover and what legal hurdles must be overcome. The General Assembly, which reconvened yesterday for its fall lawmaking session, has not been asked to weigh in on the idea. see here philadelphia convention center

“The sentiment of the board is that we would be supportive of legislation that achieved the objective of the agreement,” spokesman Stephan M. Rosenfeld said yesterday.

Patrick Gillespie, a board member who represents four of the center’s unions as head of the Building Trades Council, said: “I’m not opposed to anything that will get us expansion and stay consistent with our labor agreement.” But, he said: “There is a sentiment out there that wants to destroy all organized labor, and I won’t be involved in anything like that. I’m still hopeful the carpenters will… sign the agreement.” It is the first time the board has identified how it would circumvent the carpenters’ opposition as it seeks to implement a new labor system and quell the complaints of fed-up convention exhibitors. The frustration of the exhibitors has soiled Philadelphia’s reputation, with allegations that its Convention Center labor is costly and unfriendly. go to site philadelphia convention center

All but the carpenters’ union have signed a proposed labor agreement to deal with those complaints. Among the changes, the agreement would allow exhibitors to use hand tools in certain circumstances for work that is now done by carpenters.

“I would love to see this issue resolved” without legislative action, board member Manuel N. Stamatakis said yesterday. But “you have to keep all the options open.” Such action could more than triple the number of employees who directly work for the center. There are now 81 full-time positions, all largely administrative; a state takeover would add hundreds of jobs held by union workers who set up and tear-down trade-show booths.

Authority chairman Bernard C. Watson said last week that the board would consider “alternative measures” if the carpenters did not sign the proposed labor agreement by yesterday.

It’s unclear how the attempt to legislatively impose the proposed labor agreement would tie into an effort by city tourism officials to press lawmakers to help fund an expansion of the center.

Also, the carpenters have maintained that they have a legal right to work in the building until 2004, when the union’s collective bargaining agreement expires.

The union, which says it still wants to negotiate, declined to comment yesterday on the prospect of legislative intervention.

Spokesman Steve Albertini said: “Rather than us fret over what might be or what if, we would rather focus our energies on trying to get things done.”