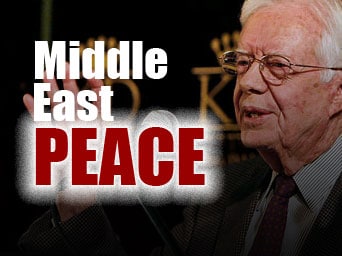 U.N. Security Council Resolution 242 of Nov. 22, 1967, concluded the war of that year and has been widely acknowledged by all parties to be the basis for a peace agreement.

It was not a new U.S. policy concerning the borders of Israel, nor should it have been surprising to Israeli leaders, when President Obama stated: “The borders of Israel and Palestine should be based on the 1967 lines with mutually agreed swaps, so that secure and recognized borders are established for both states.”

U.N. Security Council Resolution 242 of Nov. 22, 1967, concluded the war of that year and has been widely acknowledged by all parties to be the basis for a peace agreement. Its key phrases are, “Emphasizing the inadmissibility of the acquisition of territory by war,” and “Withdrawal of Israeli armed forces from territories occupied in the recent conflict.” These included the West Bank, Gaza and East Jerusalem, plus lands belonging to Lebanon, Egypt and Syria.

At Camp David in 1978, Israeli Prime Minister Menachem Begin and Egyptian President Anwar Sadat accepted the following words: “The agreed basis for a peaceful settlement of the conflict between Israel and its neighbors is United Nations Security Council resolution 242, in all its parts.”

Specifically concerning the West Bank and Gaza, the Israelis and Egyptians mutually agreed: “In order to provide full autonomy to the inhabitants under these arrangements the Israeli military government and its civilian administration will be withdrawn as soon as a self-governing authority has been freely elected by the inhabitants of these areas. …” As a result of the Oslo Accords of 1993, a self-governing authority was freely elected in January 1996, with Yasir Arafat as president and 88 Parliament members.

The International Quartet’s Roadmap for Peace in April 2003, supported by President George W. Bush, began with these words: “A settlement, negotiated between the parties, will result in the emergence of an independent, democratic, and viable Palestinian state living side by side in peace and security with Israel and its other neighbors. The settlement will resolve the Israel-Palestinian conflict, and end the occupation that began in 1967. …”
In additi
on, all 23 Arab nations and all 56 Islamic nations have offered peace and normal relations with Israel, but called upon Israel to affirm: “Full Israeli withdrawal from all the territories occupied since 1967. …”

All these statements assume, of course, that Israel may live in peace within its internationally recognized borders — but not including territories it occupied during the 1967 war. Israel withdrew from Egypt’s Sinai as a result of the 1979 peace treaty, but still occupies and is colonizing with settlers the Golan Heights of Syria, East Jerusalem and the West Bank. (When I was negotiating during the 1970s, it was clear that neither Israel nor Egypt wanted to retain control of Gaza, from which Israel withdrew in August 2005, but continues to hold under siege.)

For more than three decades, Israel’s occupation of Arab land has been the key unresolved issue. Stated simply, Israel must give up the occupied land in exchange for peace. There has never been any question regarding the occupied territory in international law as expressed through United Nations resolutions, the official policies of the United States, nor those of the International Quartet (the United States, the United Nations, the European Union and Russia).

A number of peace proposals have included the caveat found in President Obama’s recent speech: that the pre-1967 border can be modified as a result of mutually agreeable land swaps to permit Israeli settlers in areas close to Jerusalem to remain in what is now occupied Palestinian territory, with an equivalent amount of Israeli land to be transferred to the Palestinians.

One interesting proposal that Prime Minister Ariel Sharon made to me in 2005 was that this exchanged land might comprise a corridor between Gaza and the West Bank (about 35 miles), on which a railroad and highway could be built. It would be provided security by Israelis but owned and operated by Palestinians. This is just one possibility.

Two recent developments add urgency to the peace process: moves to unite the major Palestinian factions so they can negotiate with a single voice, and the potential vote in the U.N. General Assembly in September to recognize Palestine as a state. It is likely that about 150 U.N. members are prepared to take this action.

The only viable peace alternative is good faith negotiations, with the key issue remaining the same: Israel’s willingness to withdraw from the occupied territories, with the exception of small land swaps as mutually agreed with the Palestinians.

Jimmy Carter, the 39th president of the United States, is the founder of the Carter Center. He was awarded the 2002 Nobel Peace Prize.

Brown hair and eyes, a scar, freckles.. and another hand; CLUES IN SEVERED HEAD MYSTERY.(News)

The Mirror (London, England) April 3, 2008 Byline: By MAGGIE BARRY A SMALL scar on her forehead could help identify the mystery woman whose severed head and hand were found on a beach, detectives said yesterday.

The young woman – who was in her mid 20s to 30s – had long brown hair and brown eyes with a spattering of freckles across her nose.

She was pale-skinned and her ears were not pierced. The one-and-a-half inch circular scar was just below her hairline.

Last night police revealed that a second hand had been found in a black bin liner.

It was 100 yards from where two sisters, four and six, stumbled across the head at high tide on a beach in Arbroath, Angus, on Tuesday. website highlights for brown hair

Ateamof30copsandforensic scientists are working round the clock trying to establish the woman’s identity and fate.

DCI Graham McMillan, who is leading the investigation, described the woman as attractive and well-groomed, and said her hands were manicured. here highlights for brown hair

He said: “There is nothing on our databases that matches her description or any national databases and we will be searching further.

“We will be going on to Interpol and further a field. It may be that she has not yet been posted missing.” He said the remains were in good condition and were probably not in the water for very long.

Local fishermen, familiar with the tides, believe the remains had been dumped locally and washed quickly ashore.

James Yule Jr, of the Arbroath Lifeboat crew, said: “It was unlikely that they had been thrown into the water further north and washed up by tides at Arbroath.” Yesterday, just before the Seagate beach reopened at 3pm, police made one last sweep for any other body parts. A line of officers painstakingly raked the pebbles along the high water mark.

Last night the mum of the two girls who made the gruesome find said: “They are terrified. They think the same person who killed her will come after them.” maggie.barry @mirror.co.uk CAPTION(S):