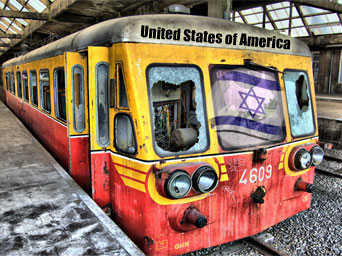 Today’s train wreck should have been foreseen when Weizzman lied to Truman about Zionist intentions. As with every U.S. president since, Truman was deceived. 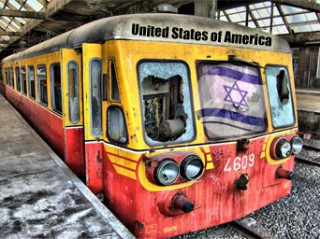 President Obama hopes to head off a train wreck in September at the U.N. General Assembly. That’s when member nations plan to press for an independent Palestine.

The Israel lobby is furious.

Critics doubt that the General Assembly has the authority to recognize Palestine. Yet protection of member sovereignty has been a goal of the U.N. since its founding. Thus the priority that Israel placed on U.N. recognition after President Harry Truman acknowledged Israel on May 14, 1948, eleven minutes after the Zionist enclave declared itself a state.

Truman refused to recognize this enclave as “the Jewish state.” Despite Barack Obama’s reference to the Jewish state in a recent speech on the Middle East, during the final days before granting recognition and thereby “legitimacy,” Truman was consumed with the fear that Zionist aspirations would lead to a racist or a theocratic state.

Those concerns led Zionist leader Chaim Weizzman to lobby Truman with a seven-page letter reassuring him that Jewish settlers envisioned a thoroughly secular state similar to the U.S. and Great Britain. Truman underscored that understanding when he recognized not the “Jewish state” (a description he crossed out) but the “State of Israel.”

Today’s train wreck should have been foreseen when Weizzman lied to Truman about Zionist intentions. As with every U.S. president since, Truman was deceived. 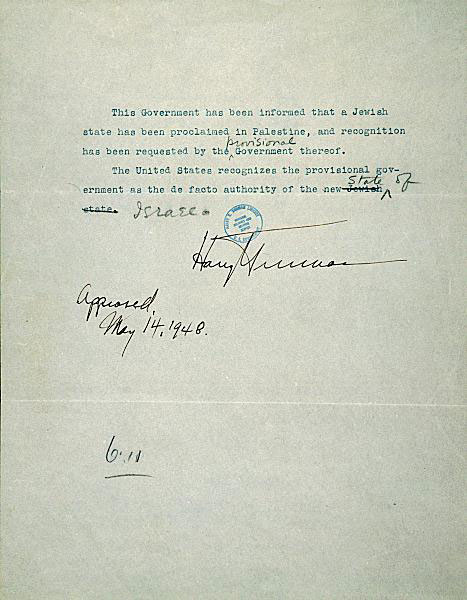 The Joint Chiefs cautioned Truman about the “fanatical concepts” of a Jewish-Zionist elite that sought recognition as a legitimate state. Even then, U.S. military leaders warned that this extremist enclave sought “military and economic hegemony over the entire Middle East.” Truman, a Christian-Zionist, chose to believe otherwise.

Albert Einstein was also worried. He and other concerned Jews described the Zionist political party that produced Menachem Begin, Ariel Sharon and now Benjamin Netanyahu as a “terrorist party” with “the unmistakable stamp of a Fascist party.”

Truman’s worst fears have since been realized except that the effects were far worse than either he or the Joint Chiefs envisioned. To persuade other nations to endure this enclave of fanatics, the U.S. assured nearby Arab neighbors that Israel would seek no more land.

We now know that the Zionists saw nation-state recognition as only an initial foothold in the region from which to expand their territory and wield geopolitical influence—behind a U.S.-enabled facade of legitimacy.

Secretary of State George Marshall assured Truman that if he recognized these extremists as a legitimate state, Marshall would vote against him. This former WWII general anticipated the dynamics that have since devastated U.S. national security as we Americans were induced to expend our blood and treasure in support of Zionist goals.

The U.S. now appears culpable due to our alliance with a nuclear-armed theocratic enclave of extremists with an apartheid domestic policy and an expansionist foreign policy.

The U.S. diplomatic community also warned Truman against recognition, as did the intelligence community and the policy planning staff at the State Department. Clark Clifford, chairman of Truman’s 1948 presidential campaign, told Truman that if he withheld recognition, campaign funding expected from the Israel lobby would be withheld.

Fast-forward to 1967 and we find this same transnational network pre-staging a conflict designed to appear defensive. Since mythologized as the heroic “Six-Day War,” that agent provocateur operation set in motion geopolitical reactions still playing out today.

How far ahead of time was this provocation planned? An Israel Air Force general conceded that attack simulations began in the early 1950s. United Artists president Arthur Krim and his wife, Mathilde, began a strategic friendship with Texas Senator Lyndon B. Johnson. By acquiring property near the LBJ Ranch, Mathilde, a former Irgun operative, could carry on an affair with Johnson while her husband chaired the finance committee for the Democrats.

On the night that the Six-Day Land Grab began, Mathilde was enjoying a sleepover in the Johnson White House. But for that Zionist aggression, would Israel have been able to live peacefully with its neighbors? Israel and its supporters staged an elaborate charade to recast this provocation as defensive. That ruse included the cover-up of an Israeli assault on the U.S.S. Liberty that killed 34 Americans and left 175 wounded.

Then as now, the fabled “Israelites” were portrayed as victims of a hostile world. Then as now, anyone chronicling the consistency of this duplicity risks portrayal as an “anti-Semite.”

This trans-generational deceit continues to undermine U.S. national security at every turn. Zionist treachery began long before George Marshall and the Pentagon cautioned Truman against what these fanatics would now deny the Palestinians: legitimacy.

By the consistency of our support over more than six decades, the U.S. now appears guilty by association. If the U.N. vote becomes a diplomatic train wreck, we have only ourselves to blame.