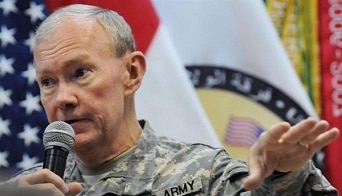 WASHINGTON, June 1, 2011 – Army Chief of Staff Gen. Martin E. Dempsey has put a lot of thought into ways to take the lessons learned during more than nine years of war and apply them to the military’s training and education programs.

Dempsey, who spent two years commanding U.S. Army Training and Doctrine Command before taking his current post in mid-April, knew it wouldn’t be easy to replicate the complexity of the operational environment in the classroom or at home station.

“We cannot expect to capture the imagination of combat-seasoned forces that have been in some of the most complex environments imaginable for almost a decade by sitting them in a classroom and bludgeoning them with PowerPoint slides,” he wrote earlier this year in a five-part series in Army magazine about the Army’s “Campaign of Learning.”

“We must make the ‘scrimmage’ as hard as the ‘game’ in both the institutional schoolhouse and at home station,” Dempsey wrote.

Speaking in February at the Association of the U.S Army’s Winter Symposium and Exposition in Fort Lauderdale, Fla., Dempsey offered a glimpse of what’s likely ahead for military leaders.

“The challenge we face is that we have to get ready for an Army that will have a potentially insatiable demand to train and to expand the aperture away from strictly [counterinsurgery] to hybrid threats, full-spectrum operations, maneuver training and all the things that we know can atrophy over time,” the general told the audience.

Dempsey told the Senate Armed Services Committee during his Army chief confirmation hearing in March that his challenge is to build on a decade of battlefield experience that’s proven the Army to be a courageous, resilient, resolute, inquisitive and adaptable force.

“Our challenge will be that these young men and women have had capabilities, authorities and responsibilities as captains that I didn’t have as a two-star general — and I’m not exaggerating a bit when I say that,” he told the panel. “And so continuing their development, … from that point, that much higher entry level than I had, is our challenge.”

Dempsey said troops simply won’t accept a return to the pre-conflict way of training. “If we were a rubber band and have been stretched over the last 10 years, we can’t let ourselves simply contract back to our previous shape, because they won’t stand for that,” he said.

Making training as challenging as possible to ensure readiness, despite what’s expected to be an era of reduced resourcing, is the goal behind the new Army Training Concept. Introduced in the Army’s 2010 Posture Statement, it provides the vision of the way ahead for the 2012-2020 modular force.

The idea, Dempsey wrote in Army Magazine, is “to make training more rigorous and relevant by leveraging technology to create challenging training environments for our leaders.”

The concept strikes a balance between operational and institutional training requirements and offers different ways to train beyond 2012 that will maintain current capabilities while producing the next generation of agile, ready forces.

It “allows us to pull [a] stream of real-world data from current operations in Iraq and Afghanistan, declassify it, and use it to build realistic scenarios to support training throughout the Army,” Dempsey wrote.

In addition, the Army is using the Training Brain to create videos based on recent battles and operations to make them accessible on the Army Training Network. “Soldiers can use this as a tool to facilitate their own learning, whether they’re in a schoolhouse environment, conducting home-station training or even deployed,” Dempsey wrote.

Meanwhile, the general said, Training Brain is helping the Army evolve massive, multiplayer online role-playing games. These provide a forum for soldiers and leaders to interact and collaborate using common scenarios in a virtual environment — not only with soldiers within their own units, but across the Army.

“This enables us to provide realistic and relevant training and learning opportunities at the point of need,” Dempsey said, while making training student- rather than instructor-centric.

Dempsey shared the contents of an email he had received from a Tradoc schoolhouse. Captains attending a career course had organized voluntarily into teams so they could compete against one another in an online role-playing game based on a relevant training scenario. The officers, he said, began giving up their lunch periods, coming in early and staying late so they could continue their training experience on their own time.

“This Army training captures the imagination, challenges the participants and allows them to adapt the material to facilitate their learning needs,” Dempsey said. It’s “a far cry from the death-by-PowerPoint approach with which many of us are all too familiar.”

Dempsey offered assurance that Army training will never lose sight of the fundamentals of “move, shoot and communicate.” But looking toward the future, he said, leader-development programs must produce leaders who are inquisitive, creative and adaptable.

“It should be clear to all after more than nine years of conflict that the development of adaptive leaders who are comfortable operating in ambiguity and complexity will increasingly be our competitive advantage against future threats to our nation,” he said.

With that in mind, Dempsey said he makes a series of promises to students in pre-command courses who are preparing to become battalion and brigade commanders and command sergeants major.

“I promise them that the future security environment will never play out exactly the way we’ve envisioned. History confirms this,” he said. “I promise that we will not provide the optimal organizational design nor perfectly design the equipment that they will need when they enter into a future mission. History — especially recent events — confirms this as well, although we do our best not to get it too wrong.

“And I promise that the guidance they receive from ‘higher headquarters’ will always come a little later than needed,” he said. “We would be ill-advised to think that we will do much better than our predecessors in that regard.

“What I promise, however — and this, too, is confirmed by our history is that it is always the leaders on point who are able to take what we give them, adapt to the environment in which they are placed and accomplish the mission,” Dempsey continued. “Leader development becomes job No. 1.”

(This the second article in a series about how the Defense Department and military services plan to maintain combat effectiveness and readiness as the current operational tempo begins to decline.)

Research firm comScore Inc. says revenue rose 16 percent from a year ago to $1.03 billion on the Monday after Thanksgiving, the first one-day spending total above $1 billion ever.

Still, analysts cautioned that better results in stores and online during the Thanksgiving weekend don’t necessarily mean the whole holiday period will be strong. Shoppers might have been lured by discounts, pulling forward sales from December. website cyber monday sales

A better picture will emerge today , when the nation’s retailers release revenue figures for the month. Industry watchers will also be looking for indications that Americans are spending on themselves, and not just sticking to Christmas lists.