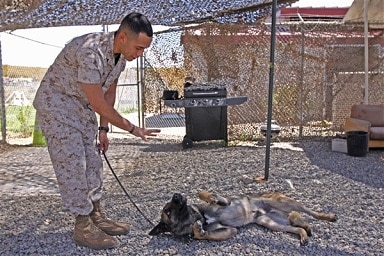 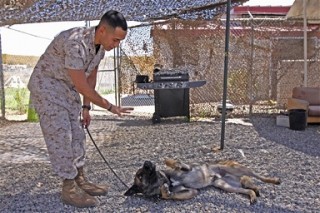 MARINE CORPS BASE CAMP PENDLETON, Calif., June 1, 2011 – Two Marine Corps members, one somewhat hairy for a Marine, work together to make this military base safe for its workers and residents.

Rocky barked and playfully licked at his handler.

“He likes it when you talk to him like a baby,” Melendez said of his canine partner.

Rocky is a bomb-sniffing, Improvised Explosive Device detecting, attack dog capable of vehicle extractions and patrolling the base, Melendez said. In conjunction with Marines from the Provost Marshal’s Office here, he said, Rocky helps to ensure the safety of Camp Pendleton’s workers and residents by providing security and sniffing out dangers.

“Some people work with machinery or with a computer, but this is a living, breathing tool we use,” “Melendez said. “There’s no other job like it in the Marine Corps. I really can’t explain the feeling I get when I come to work and actually work with my dog … it’s a privilege.”

In order to complete the mission successfully, dog and handler must work together and their bond must be unbreakable. Handlers generally spend between 8 to 14 hours-a-day training with one another.

Rocky “sees me in the morning and knows it’s game time,” Melendez said. “His ears go back, his tail starts to wag, he starts running and spinning around in his kennel, and he starts whining because all he wants to do is come out and play with daddy.”

Most new handlers begin work with an experienced dog who knows the commands and the job in general, Melendez said. However, he said, Rocky came to him straight out of military dog-training school at Lackland Air Force Base in San Antonio, Texas.

“When you have a new dog and a new owner there is bound to be tension in the beginning,” Melendez said. “But we’re both laid back; he can lay down right next to me and just relax, and that’s one of the things that will build the bond between dog and handler.”

“If you can’t,” he added, “then this job is definitely not for you.”

Officer Brandon Owens, chief trainer for the K-9 unit and a civilian police officer on Camp Pendleton, said he’d watched Melendez and Rocky grow and develop as a team from the beginning.

“He has an exceptional relationship with Rocky,” Owens said of Melendez. “Rocky doesn’t only listen to him because he has to, he does it because he wants to, and that goes a long way. That’s a key thing we look for in a dog/handler relationship.”

“HUT!” Melendez shouts and Rocky instantly stops in his tracks and heels to his “daddy’s” side — making him not only man’s best friend but a Marine’s best friend, as well.