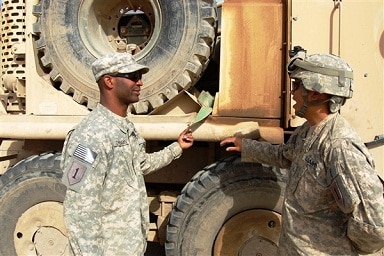 by Army Spc. William A. Joeckel

From serving in the Marine Corps, being a police officer in his hometown of Detroit, to deploying twice with the Vanguard Battalion to Iraq, Chatman has worked a variety of jobs that have not always been the safest. However, he is determined to continue his service to his country.”I have always been employed in a job that had an ‘us versus them’ mentality,” he said. “I never had what civilians call a ‘normal’ job.”

Chatman joined the Marines in 1992 as a maintenance management specialist and served at El Toro, Calif., for three years. His first deployment came in 1994 during Operation Vigilant Warrior to Saudi Arabia. He left the Marine Corps in 1999 and returned to Detroit.

In 2000, Chatman joined the Detroit Police Department and, due to his military background, was assigned to one of the most unruly precincts in the city.

“They put me in the worst precinct on the midnight shift because I was a Marine,” he said. “My first form of combat happened in the city of Detroit, not while in the military. All I had was my pistol and my partner. I didn’t have air support, protection or a team to back me up like I do today in the Army.”

Chatman left the police department after three years because he missed being a Marine. He returned to the Corps in the same job he previously held.

After another four years as a Marine, Chatman returned to the Detroit Police Department, then joined the Army after a year in his old precinct.

“I had a friend who always talked about the Army, so I gave it a shot,” he said. “I have never been scared to do what I wanted to do. If I wasn’t working somewhere that I liked, I’d change it.”

Enlisting as a motor transport operator at the age of 36, Chatman was sent to Company F of the Vanguard Battalion in November 2008. He was then deployed to Iraq in 2009 with the unit, and was awarded the Combat Action Badge when a rocket-propelled grenade was launched at his vehicle.

Chatman is now serving in his second deployment to Iraq with the Vanguards as a squad leader in the ammunition section. He said he enjoys being a member of the unit because he doesn’t feel held back from being an effective leader.

“This unit is the first and only Army unit that I’ve been to,” he said. “The leadership in this unit is so squared away and hardcore, I benefit from being a part of this team.”

His soldiers have great respect for him. Army Cpl. Lonnie Worley, a petroleum supply specialist with Company F and a Seneca, S.C., native, said Chatman is hard to describe.

“Sergeant Chatman has stories for everything,” Worley said. “He’s very competitive, in that he wants his squad to be the best at what they do.”

Army Pfc. Christopher Rivera, a member of Chatman’s squad and a Waipahu, Hawaii, native, said working with Chatman makes it pleasurable to come to work, due to his sense of humor and his dedication to his soldiers.

“He always keeps us going through our days with his funny sense of humor, but also keeps pushing us to be the best we can be,” Rivera said.

Chatman attributes his success in being a leader to his unusual life experience.

“Being an older [noncommissioned officer] makes it is easy to communicate I have seen a lot of stuff,” he said. “It is important to find your soldiers’ motivation and then exploit that to help them maximize their potential. Troops will follow you if you are willing to break a sweat with them.”

Chatman has been serving in the military for one-third of his life, and plans to continue his career in the Army.

“I figure that I’ll be working until I’m 100 anyways,” he said. “You have to love what you are doing or you won’t be an effective leader.”

Army Sgt. Marcus Chatman guides a truck at Camp Taji, Iraq, May 20, 2011. Between the military and the Detroit Police Department, Chatman has served for nearly 20 years. U.S. Army photo by Spc. William A. Joeckel