Home World NATO to Build on Lessons of Afghanistan for Future 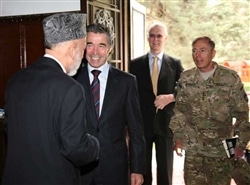 WASHINGTON, June 2, 2011 – A week after NATO Secretary General Anders Fogh Rasmussen made a firsthand assessment of progress in transferring increased security responsibility to Afghan security forces, the alliance’s supreme allied commander for transformation is focused on building on lessons learned in Afghanistan for the future.

Rasmussen visited Afghanistan last week to reaffirm NATO’s long-term commitment as seven sections of the country, including the city of Herat in western Afghanistan, prepare to transition to Afghan security responsibility July 1. Speaking during an online video blog, Rasmussen called the city “an example of how Afghanistan can start progress toward Afghan leadership.”

“Those who threaten Afghanistan’s future should be under no illusion,” he said. “NATO is and remains committed to Afghanistan.”

“My hope is that we do not lose the lessons we have identified and learned in Afghanistan,” he said. “We need to keep them to prepare the troops for the future, and also to continue developing the know-how [and] the capabilities we need for this type of warfare.”

But Abrial emphasized that NATO forces can’t concentrate only on those lessons, thinking that “the last war we have fought is the same as the future war we are going to be facing.”

“We need to keep an open mind,” he said, keeping prepared to address the full spectrum of challenges from conventional to nonconventional warfare. That concept needs to guide the way the alliance prepares, organizes and equips for the future, he said.

“We need … to make sure that for the future, we can be ready for anything,” Abrial continued. “Who knows what is going to happen tomorrow? … Will there be another crisis somewhere else? Will we be asked to intervene somewhere, and in which form, which fashion?”

What applied to Afghanistan may not apply elsewhere, he warned.

“We cannot say, ‘OK, whatever happens, we will do a new Afghanistan again. No way,” Abrial said. “So don’t forget the important lessons – but don’t concentrate [only] on this type of environment.”

Abrial called the flexibility provided by NATO’s new strategic concept key to ensuring the alliance remains relevant as it faces the future.

“To make sure that we can face any kind of challenge that will arise in the next 10 years, flexibility is absolutely paramount,” he said. “We have to make sure the concept will not be made obsolete when we encounter the first strategic surprise. And if you look at history, military history is just a string of strategic surprises.”

Surprises in the future are certain, Abrial asserted. “The challenge is that we can face the surprise, and be ready to solve the crisis we will face,” he added.

Abrial shared Rasmussen’s commitment to seeing the mission through in Afghanistan, calling it a demonstration of NATO’s unity. As the security transition takes place there, Abrial said, he believes the forces freed up could be reinvested somewhere else, possibly as trainers.

“So my vision is that NATO is on the right track, and that the nations will continue to … make this transition possible, together,” he said.

(This is the third article in a series about how the Defense Department and the military services, as well as NATO, plan to maintain combat effectiveness and readiness as the current operational tempo begins to decline.)