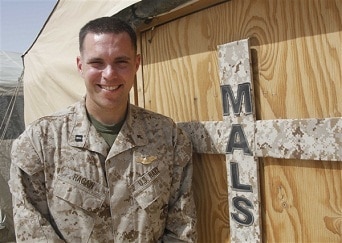 CAMP BASTION, Afghanistan, June 3, 2011 – A young James C. Ragain found himself face to face with tragedy in his seventh-grade year. His father, a Navy dentist, had moved his family to Parris Island, S.C., where his first contact with military chaplains would forever change his life.

“One afternoon, a couple buddies and I went to a local swimming pool and one of my friends drowned,” Ragain said. “The whole neighborhood came out to console the family. I remember the chaplains being out there to support the boy’s family. That was enough to really make a lasting impact on a young boy like me.”

After graduating from Miami University in Oxford, Ohio, with a degree in social studies education, Ragain became a high school teacher. But two years later, he still felt a call to serve the military and to serve God. So the Knoxville, Tenn., native decided to take part in the Navy’s chaplain candidate program.

“I became a chaplain candidate in 2003, and then went on to seminary, where I worked on my master of divinity studies [degree] in Chicago,” said Ragain, who now serves in the U.S. Navy’s chaplain corps as a lieutenant.

Ragain joined the active duty ranks in 2009, arriving at his first duty station at Marine Corps Air Station Cherry Point, N.C., and he deployed here this year with Marine Aviation Logistics Squadron 40 as the squadron’s chaplain.

“What never changes is that you are facilitating a method for someone to get their religious needs,” he said, comparing his deployed duties with life in garrison. “You’re caring for all the people, you’re doing counseling, advising the command and doing workspace visits.”

A definite difference is the nature of the things he discusses with service members here, such as being separated from loved ones, said Ragain, whose wife, Michelle, lives in New Bern, N.C., and works both as a personal trainer and as a mother to the couple’s three children — including twin 3-year-old daughters. “The Marines are away from their families, just like I am,” he added, “so I am able to counsel them and offer them firsthand guidance.”

Ragain provides several religious services every week and also works with his squadron’s leadership to help Marines who may be facing difficulties.

“In addition to the regular services out here, we are also doing suicide-intervention training,” Ragain said. “It’s a week-long training program we do with leaders to help with anyone who may be having suicidal ideations.”

The chaplain said he has had to talk to Marines who were having troubling thoughts. “Generally, we would talk for a while, and then I work with them to get the next level of help that they need,” he said.

Ragain’s efforts have proved valuable to his command, and squadron leaders said the chaplain’s well-known sense of humor and approachability are ideal for reaching Marines of all ranks.

“He’s probably the greatest secret weapon I have here in my squadron,” said Marine Corps Lt. Col. Clarence Harper, the squadron’s commanding officer. “The way he goes about building religious programs within the squadron is exceptional. He’s just a tremendous help. I love that guy like a brother.”

Marine Corps 1st Lt. Joseph W. Steen, the squadron’s logistics officer, said he goes to Wednesday night services regularly to continue his spiritual education. He added that since he met Ragain, they have become close friends.

“He’s one of the best chaplains I’ve ever met,” Steen said. “He is appreciated and very respected in this squadron. We talk about three times a week, and I can honestly say that we have a deep sense of friendship.”

Navy Petty Officer 2nd Class Jason Dockter serves as a religious programs specialist for the squadron and works side by side with Ragain.

“Chaplain Ragain has been great to work for,” he said. “I can work with him on a professional level, but I can also connect with him on a personal level, and I think that helps us develop as a team when we meet with Marines and interact with them.”

Since he’s been working with Ragain, Dockter said, he has been in a prime position to witness the positive influence the chaplain has made on the squadron.

“I definitely see the impact he makes,” he said. “It’s been apparent in our Bible studies. When we first got here, the Bible studies started off very small, and since then, they have grown exponentially. I think that is a testament to the kind of person that Chaplain Ragain is and how he’s able to deliver the word of God.”

Although Ragain is known as a fun and approachable person, he takes his ministry very seriously.

“I think the best thing that a chaplain can offer service members in a deployed environment is a representation of who God is,” the chaplain said. “Since we’re strictly noncombatants and are not allowed to carry weapons, we’re set apart, and I think people want us to be that representation of God.”

Although he has gained the trust and appreciation of many Marines and sailors here, Ragain’s goals are far from accomplished.

“I want to be obedient to God. Being faithful to him and serving the Marines and Sailors the best I can is the best way I can do that,” he said. “I just take it tour by tour and see where God leads me. I want to continue to grow in leadership, grow in my knowledge of scripture and who God is and how to best be a representative of him in whatever setting I’m in.”