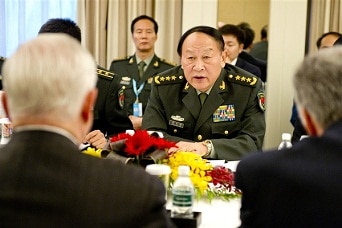 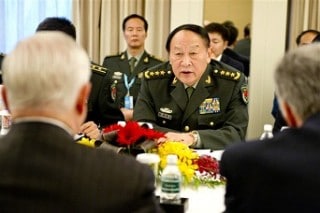 In a speech the morning of June 4 at the Shangri-La Dialogue, an annual Asia security summit hosted here by the International Institute for Strategic Studies, Gates said the United States is a Pacific nation, and that requires the United States to sustain its allies while maintaining a robust military engagement and deterrent posture across the Pacific Rim.This is Gates’ fifth and final speech as defense secretary at the dialogue, as he is retiring at the end of the month. A record 18 defense ministers from around the region are attending the conference.

The U.S. posture commitment has been a bedrock principle of the United States over the past 50 years, the secretary said, and far from pulling out or retrenching, the United States will demonstrate the flexibility needed to enhance engagement in Asia. America will update its relationships with the nations of the region, develop new capabilities and transform its defense posture to meet today’s challenges, he added.

The fact is that the breadth and intensity of U.S. engagement in Asia has grown significantly in recent years, the secretary said, even during a time of economic uncertainty and major military campaigns in Iraq and Afghanistan.

U.S. leaders have consulted with Asian leaders often, Gates noted. This trip, for example, marks Gates’ seventh trip to the region in 18 months.

“Indeed, one of the most striking and surprising changes I’ve observed during my travels to Asia is the widespread desire across the region for stronger military-to-military relationships with the United States much more so than during my last time in government 20 years ago,” he said.

U.S. engagement in Asia has been guided by a set of enduring principles that have fostered the economic growth and stability of the region, Gates said. These principles, supported by both U.S. major political parties, include free and open commerce; a just international order that emphasizes rights and responsibilities of nations and fidelity to the rule of law; and open access by all to the global commons of sea, air, space, and now, cyberspace.

The principles also embrace resolving conflict without the use of force, he said.

American defense engagement  from forward-deployed forces to exercises with regional partners  will continue to play an indispensable role in the stability of the region, Gates said. The United States’ commitment to Japan and South Korea is absolute, but America will, in consultation with Japanese and South Korean leaders, modernize basing arrangements, he added.

Meanwhile, the secretary said, America will do more and expand into other areas in nontraditional ways.

“We’ve taken a number of steps towards establishing a defense posture across the Asia-Pacific that is more geographically distributed, operationally resilient, and politically sustainable,” the secretary said. The military posture proposed will maintain American presence in Northeast Asia while enhancing U.S. presence in Southeast Asia and the Indian Ocean area, he said.

U.S. and Australian officials are examining expanding opportunities for both militaries to train and operate together including alliance arrangements that would allow for more combined defense activities and shared use of facilities, Gates said.

“We are evaluating a range of options, including increasing our combined naval presence and capabilities to respond more rapidly to humanitarian disasters improved Indian Ocean facilities a region of growing international importance,” he said.

U.S. and Australian officials are also looking to expand training exercises for amphibious and land operations, activities that could involve other partners in the region.

“In Singapore, we are strengthening our bilateral defense relationship within the context of the Strategic Framework Agreement and pursuing more operational engagement  most notably, by deploying U.S. littoral combat ships to Singapore,” Gates said. “We are examining other ways to increase opportunities for our two militaries to train and operate together, to include pre-positioning supplies to improve disaster response, improved command and control capabilities, and expanding training opportunities to help prepare our forces for the challenges both militaries face operating in the Pacific.”

It would be a mistake to measure U.S. commitment to Asia solely by counting the number of service members permanently stationed in the region, Gates said.

“In the coming years, the United States military is also going to be increasing its port calls, naval engagements and multilateral training efforts with multiple countries throughout the region,” he said. “These types of activities not only broaden and deepen our relationship with friends and allies, but help build partner capacity to address regional challenges.”

These developments demonstrate U.S. commitment to sustaining a robust military presence in Asia, Gates said, a commitment “that underwrites stability by supporting and reassuring allies while deterring, and if necessary defeating, potential adversaries.”

This will be expensive and cannot be disentangled from the wider discussions of the U.S. fiscal predicament in general, and the pressures on the U.S. defense budget in particular, he said.

In the past two years, the secretary noted, he has dropped most of the troubled and questionable weapons programs from the U.S. defense budget and ordered an effort to find more savings and to look at the risks that budget decisions entail.

“We are left with modernization efforts that our defense leaders have deemed absolutely critical to the future relating to air superiority and mobility; long-range strike; nuclear deterrence; maritime access; space and cyber; and intelligence, surveillance and reconnaissance,” he said. “Though the review is not complete, I am confident that these key remaining modernization programs systems that are of particular importance to our military strategy in Asia will rank at or near the top of our defense budget priorities in the future.”

Many of those key programs would address one of the principal security challenges possible in the future: the prospect that new and disruptive technologies and weapons could be employed to deny U.S. forces access to key sea routes and lines of communications.

The U.S. Navy and Air Force have been concerned about anti-access and area-denial scenarios for some time, the secretary said, and the two services are working together to develop a new concept of operations called “Air-Sea Battle.” The concept is aimed to ensure the U.S. military will continue to be able to deploy, move, and strike over great distances in defense of allies and vital interests.

Gates said programs and strategies are on track to grow and evolve further, even in the face of new threats abroad and fiscal challenges at home.

Yet even with the evidence to the contrary, Gates said, there are some who argue that America cannot sustain its Asian-Pacific role. “There are some voices of gloom and doom who would also argue that the best days of the United States are behind it,” he added.

The challenges facing America are daunting, Gates acknowledged, but he said he remains “completely optimistic about the prospects of the United States, because I have seen firsthand the staying power and adaptability of America over the course of my life.”

“Indeed,” he continued, “history’s dustbin is littered with dictators and aggressors who underestimated America’s resilience, will and underlying strength.”

No one can predict the future, Gates said. “But I believe our work in Asia is laying the groundwork for continued prosperity and security for the United States and for the region,” he added. “It has been enormously gratifying through the course of my career to see the profound good that has come about from American engagement in Asia.

“For when America is willing to lead the way, when we meet our commitments and stand with our allies, even in troubling times, when we prepare for threats that are on the horizon and beyond the horizon, and when we make the necessary sacrifices and take the necessary risks to defend our values and our interests, then great things are possible, and even probable, for our country and the world,” he said.

(Editor’s note: Singapore is 12 hours ahead of Eastern Daylight Time.)