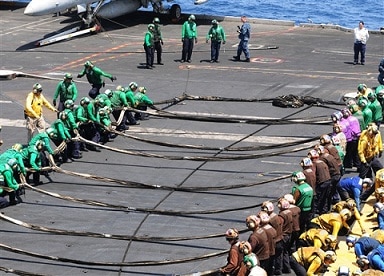 WASHINGTON – Committed to preserving and building on expertise garnered during the past decade of conflict, the Navy is hard at work institutionalizing lessons learned as the military draws down in Iraq and looks toward a drawdown in Afghanistan as well, one of the fleet’s top training officers reported.

Navy Capt. Michael White, the chief operating officer for Naval Education and Training Command, said the Navy is banking on the increased use of simulation and realistic operational scenarios administered by a cadre of experienced sailors to ensure lessons learned since the 9/11 terror attacks don’t fall by the wayside.”

As the conflict draws down, clearly we may not be doing some of the same missions as we do today,” said White, a rear admiral selectee. “So the question becomes, ‘How do you keep that in reserve?’ And essentially, we believe that is the legacy of our sailors” who will draw on experience they are gaining now to train the future fleet.

Unlike garrison-based ground forces, the Navy always has been a forward-deployed organization, White noted. That requires constant vigilance and readiness to respond to conditions as they arise.

“As our sailors are going through training and learning from their instructors, the end goal is to join a unit — a ship or squadron or construction battalion, whatever that unit might be — that will be forward-deployed and ready for any action that might come up,” he said.

And with plenty of examples of deployments that began in peacetime, then changed based on world situations, White said, there’s clear recognition throughout the Navy of the need to be ready to execute the mission, regardless of its nature, on a moment’s notice.

“It’s that forward-deployed mentality that will keep our folks sharp,” he said.

Facing the future, White said, the fleet is as combat-hardened as it’s ever been, enriched by new capabilities developed during the past 10 years.

The Navy’s 15 learning centers, established several years ago as part of the Navy’s “Revolution in Training” initiative, is ensuring the specialized career training provided remains aligned with activities being conducted within the fleet, White said.

In addition, human performance requirements reviews routinely bring together the centers’ learning specialists with subject matter experts from the fleet to keep their programs as current and relevant as possible.

“Our goal is to make sure that as things evolve, we can continuously adapt and improve our training process,” White said.

Explosive ordnance disposal divers, for example, have incorporated counter-improvised explosive device tactics, techniques and procedures into their core curriculum. In addition to evaluating the threat, they have become expert in post-blast analysis and investigations, and continually evolve their training to reflect current operations, White said.

Navy security forces have undergone a transformation, particularly within the master-at-arms and gunner’s mate ratings. Rather than focusing on basic weapons training that emphasized weapons handling and employment in relatively benign training scenarios, the training has been amped up to incorporate the all-important decision-making process.

“The Center for Security Forces has really stepped that up to include judgment and engagement in the base training,” White said. “It’s not only in how to employ a weapon but what decision process do you use in determining when you should employ it.”

This includes not just static weapon employment, but also the ability to “shoot, move, communicate and survive,” he said, whether the sailor is operating on the ground in Afghanistan, or protecting his ship from attack.

The Navy also has refined its longstanding visit, board, search and seize, or VBSS, mission, particularly in light of increased piracy off the coast of Somalia.

“The training for these teams has increased to not only include the basics of boarding a ship and searching it, but to do it in a more tactical manner, where you have perhaps a Navy boat crew and a Marine Corps team that might go aboard a ship,” White said. “We are conducting the training today as part of the improvements in the adaptation to what we are seeing in the fleet.”

Other major changes have occurred within the Navy’s Center for Information Dominance, where sailors are trained to use their computer systems and networks as more than just tools.

“We are teaching our information technicians to protect networks [and] to exploit networks and really to do it on a level that we haven’t done before,” White said. He noted that many of the technicians are getting commercial certifications so they have the skills to employ commercial tools that have become critical to Navy systems and networks.

Throughout the fleet, White reported a big emphasis on promoting language, cultural and regional expertise.

“We recognized the gap that our sailors had, where they would go into a country to be part of the conflict or humanitarian operations … and we hadn’t really prepared them to be ambassadors, if you will, of the United States,” he said.

So the Navy stood up the Center for Language, Regional Expertise and Culture at Corry Station Naval Technical Training Center in Pensacola, Fla., in March 2006. This center helps to prepare sailors for the multiple and diverse cultures they will encounter while conducting the full spectrum of military operations across the globe, White explained.

It has expanded to include courses covering about 182 countries, with special emphasis on subjects such as Islam, Afghan culture, Middle Eastern etiquette, and even the Taliban.

“The idea is that as sailors deploy, we can give them a brief background on what they might be exposed to so they don’t make those common mistakes that we wouldn’t perceive in our American culture that might be very offensive to our partners,” White said.

At the high end of this training continuum, the Navy is an active participant in Chairman of the Joint Chiefs of Staff Navy Adm. Mike Mullen’s Afghanistan-Pakistan Hands program. This program, launched in 2009, provides a core cadre of mostly mid-career officers with specialized language and cultural skills.

Looking ahead to the end of the current conflicts, White said, the Navy plans to make wide use of simulation to present sailors with realistic, demanding training scenarios.

“To truly replicate the challenge of a wartime environment is tough, so what we are training to do at Naval Education and Training Command is to use technology to help us,” White said.

Bridge simulators, for example, train bridge teams to enter a threatened port or react to an attack at sea. A mock village at the Naval Explosive Ordnance Disposal School at Eglin Air Force Base, Fla., teaches EOD technicians to identify, defuse and dispose of IEDs and other ordnance. Simulators transform traditional classrooms into settings that challenge students to make judgments about the best way to respond to a particular threat.

“It is absolutely amazing, within a few minutes of the scenario starting, how quickly you become immersed in it and forget your surroundings as your brain tries to work through these complicated things,” White said. “It is not real combat, but we believe we can certainly induce some stress. I can tell you from personal experience that you feel it. The perspiration begins, and it really is challenging.”

As it strives to introduce the emotional, intellectual and physical rigors of combat into its training, the Navy is applying another lesson of the current conflicts and is helping to give sailors the tools to cope with those demands.

“We want to build better resilience into our sailors through the stresses of combat and deployment,” White said. “We are learning a lot from subject-matter experts in industry and other militaries, and really trying to build that into an effective training tool to help our sailors cope with these stresses so they can be resilient and ready to deploy whenever and wherever they are needed.”

This is the fourth article in a series about how the Defense Department and the military services, as well as NATO, plan to maintain combat effectiveness and readiness as the current operational tempo begins to decline.