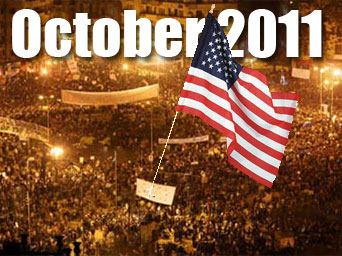 When other nations’ governments go off track, their people do something about it. In Tunisia and Egypt people have nonviolently claimed power in a way that has inspired Americans in Wisconsin and other states, as well as the people of Spain and the rest of the world.

Washington, D.C., is the weakest point in our democracy, without which state-level reform cannot succeed. Most Americans want our wars ended, our corporations and billionaires taxed, and our rights expanded rather than curtailed. We want our money invested in jobs and green energy, not a global military that can’t stop itself. Our government in Washington goes in the opposite direction, opposing popular will on these major issues, regardless of personality or party.

On October 6th, a Thursday, the Afghanistan War will complete its first decade as the United States goes into its 2012 austerity budget. Tahrir Square in Cairo Egypt translates as Liberation Square. We have in Washington, D.C., a square with the similar name: Freedom Plaza. This square is located between the Capitol and the White House along Pennsylvania Avenue, and built into its surface is a map of downtown Washington on which nonviolent resistance actions can be conveniently planned.

Today a coalition of organizations and prominent individuals is announcing at October2011.org a plan to begin a people’s occupation of Washington, D.C., on October 6th, to build it into something larger on the 7th, 8th, and 9th, and to not leave until we are satisfied. There is absolutely no reason that our government must be permitted to continue functioning on behalf of Wall Street and a war machine. In Afghanistan, the people protest our bombing of their homes. We sit inside our own homes complaining about our economy, our banks, our schools. Instead, we now have a chance to have a say, in solidarity with others around the world, with success just as likely — if just as shocking to those in power — as with past U.S. people’s movements and the recent advances in Tunisia and Egypt.

This will not be another rally and march on a Saturday, make home movies, pat ourselves on the back, and go home. We are coming to Washington to stay. Today’s announcement is an open invitation for all kinds of organizations, national and local, to join in the early planning stages of this campaign. We need not agree on political ideology or party or much else. We need only agree that nonviolent resistance to a government that routinely ignores the will of its people is appropriate in our nation as well — even above all, given our nation’s impact on the environment, global finances, and wars.

Over this past weekend Wikileaks revealed that the U.S. government had been quite upset with Britain’s Prime Minister Gordon Brown for pulling troops out of Iraq, and had accused him of something even worse: of having pulled the troops out in order to please the British public and win an election. What, we might ask, would be wrong with the U.S. government occasionally doing what the U.S. public demands? When I’m in London later this week I will be pleased to let them know we’re alive over here with exciting plans for October, and in fact to ask them to join in on October 6th — they have plenty of good squares over there too.

On the new website October2011.org , which lists an impressive number of groups and individuals already committed, you can sign a pledge to be there on October 6th and to stay. But how can you be sure you want to make that commitment? How can you agree to travel great distances and make great sacrifices? Sure, to be part of history, to be able to tell your grandchildren you were there for the most famous event of the new century, you could do it. But how can you be sure that’s what this will be? Well, nothing is strictly guaranteed, but you can sign up committing to be there and to do this only if at least 50,000 other people do the same. With that number of dedicated people, we will be able to kick start a process of nonviolent change the likes of which we haven’t seen in this country in many years. Sign up there and we’ll let you know how many others are with you.

Individuals can sign up and spread the word. You can also post on the website your reasons for being there. So can organizations. By doing so, you join a coalition and will be able to participate in the planning. This is a coalition that is just beginning to be formed. It is not a new organization. Existing organizations that promote the coalition website are in turn promoted by the coalition. Get in touch to learn more:

Media outlets can also sign on as intending to cover the campaign. Many already have. I’ll be discussing this on Lila Garrett’s “Connect the Dots” on KPFK today, on the Nicole Sandler Show, on GW on the Hill, and on Scott Harris’s “Between the Lines.” Others are on lots of other shows. Already independent video producers are devoting themselves to the cause. Check out these videos by Dennis Trainor below. Get inspired. Make your own. Tell your friends. Groups on the West Coast like the Backbone Campaign are already planning training events and travel arrangements.

If you need or can offer help getting to D.C. let us know.

In the meantime, take the pledge to be there. That act alone will put a little bit of concern into the minds of those ruining our country, and that will be something new

Industrial Safety & Hygiene News August 1, 2007 | Burnham, Thomas [ILLUSTRATION OMITTED] Every year more than 5,000 pedestrians are killed by drivers in the United States. At corporate and industrial campuses employees take their chances against traffic and delivery trucks as they cross between buildings. At hospitals, schools, airports and event centers visitors put themselves at risk just to reach the facilities. How can companies better protect their customers and employees from pedestrian–vehicle accidents? A solution that addresses this problem is the use of in-roadway warning light systems (IRWL).

Durable devices IRWLs were invented in the mid-1990s as a tool for improving safety at uncontrolled–or midblock–crosswalks. IRWL systems consist of tough-shelled lighting devices that are installed in the roadway and linked to an activation mechanism. The devices project a bright flashing light towards approaching traffic–similar to airport runway lights–when activated. Typically the lights are activated for a fixed crossing duration when a pedestrian presses a push button. Adoption of IRWL systems began in earnest after they were listed as an approved traffic warning tool in 2000 in the Manual on Uniform Traffic Control Devices (MUTCD), the U.S. Federal Highway Administration’s standards guidelines. Since that time IRWL systems have been installed by municipalities, business parks, theme parks, hospitals, schools, and industrial facilities. As a traffic warning tool, rather than a traffic control tool, IRWL systems are subject to much lower liability for the installing entity. Their use is an attempt to improve driver warning, and safety, at crossings. see here city of round rock

Dell campus installation As an example, the city of Round Rock, Texas, recently installed three inroad warning light systems at crosswalks at Dell’s sprawling headquarters campus. City streets separate buildings in the campus and Dell had experienced accidental employee injuries and even deaths over the years. The warning light systems include crosswalk signs enhanced with LEDs that flash when pedestrians are crossing. here city of round rock

Research findings Research shows that IRWL lights effectively reduce traffic approach speeds and increase compliance with pedestrian crossing regulations. Kay Fitzpatrick and her colleagues wrote in a report, “Improving Pedestrian Safety at Unsignalized Crossings,” that “In-roadway warning lights have increased driver yielding to the 50 to 90 percent range. Additionally … in-roadway warning lights typically increase the distance that motorists first brake for a pedestrian crossing, indicating that motorists recognize the pedestrian crossing and the need to yield sooner. These results have been even more dramatic at night when the in-roadway warning lights are highly visible.” In “Engineering the Roadway Visibility Information System,” Mary Cimo wrote that the addition of an IRWL system “reduce(d) the mean speed at which vehicles approach the crosswalk, as well as the mean number of vehicles that pass over the crosswalk while a pedestrian is waiting, as compared to a clearly striped crosswalk without in-pavement lighting.” Unmistakable message Whether the lights are amber–signifying the need for caution–or they are red–signifying the need to stop–inroad lights convey an unmistakable message to drivers approaching them. In-road lights are quickly associated with the presence of pedestrians or some other imminent need for caution. They are especially useful for avoiding a common pedestrian vehicle accident: a driver in a center travel lane on a multi-lane road does not see and stop for a pedestrian that a driver on the curbside lane does stop for. In-road lights flashing directly in front of the center lane driver warn him or her of the presence of a pedestrian in a crosswalk Given the warning effectiveness of in-road lights, other non-crosswalk applications for their use have emerged. For example, in-road lights can be used to warn truck drivers approaching loading bays about vehicles leaving a warehouse exit that crosses their path.

In-road lighting systems are often powered by 120V AC or they can be solar powered. The latest designs feature systems with lights that are independently solar powered and wirelessly activated, thereby removing the need to individually wire the lights. This can reduce installation costs and permit more flexible light placement.

Environmental considerations In-road lights can face a tough task and a tough environment. In order to command attention not only in darker times but during bright sunny days the lights must be exceptionally bright. And in northern climates the lights must endure not only the abuse of cars and trucks, but also the scraping of snowplows. Consideration of these demands should guide product selection. Given a well-selected and well-designed system, IRWL can greatly reduce your chance of having to address a pedestrian tragedy.