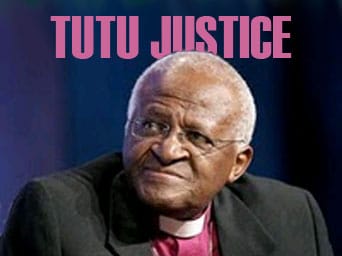 With all the calls on Archbishop Tutu’s time and counsel, it seemed just too much to hope that he would bother himself with a small but valiant struggle against Apartheid Israel in Marrickville, Australia. But Archbishop Tutu knows better than most how an apartheid regime can blind others to the suffering it institutes against another people and the  vitrol its apologists mete out to those who support them.

His most welcome letter of solidarity with the ethical stance taken by the Marrickville Mayor Fiona Byrne and the Councillors who want to hold Israel to account for the long history of injustices it has visited on the Palestinian people, should have Australians thinking long and hard.

After all, it was not that long ago that Australians were asked to support the mass struggle for freedom from an Apartheid regime in South Africa. Even then politicians, the media and many interest groups wanting to maintain their relations with the apartheid regime, railed against the call for boycotts. 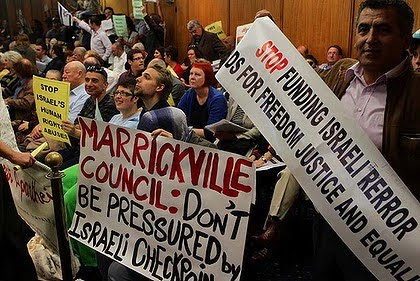 They did not prevail  because ordinary people everywhere were prepared to take extraordinary measures in support of human rights and the humanity that binds us together.

Who would have  thought we would face such a moment in history again? But, the purveyors of exclusivism and racism lurk in every generation and it is only our indifference that allows their  malignant ideology to enter the mainstream and be seen as normal and acceptable.

When the Palestinian Boycott, Divestment and Sanctions National Committee (BNC) saw the nasty campaign being waged against the Marrickville councillors and others, it knew that support from Archbishop Tutu would give them succour in those long days of public vilification. And, it comes just at a time when Greens senator-elect Lee Rhiannon is facing the same barrage of attacks as she prepares to take her seat in Australia’s senate.

Shamefully, some of those attacks have come from political colleagues in our parliament who all seem so hell-bent on lauding Israel right or wrong.

Archbishop Tutu’s letter might give them pause to remember there is nothing honourable about being on the wrong side of history. The inhuman injustices being endured by the Palestinians require us all to act in the name of humanity. 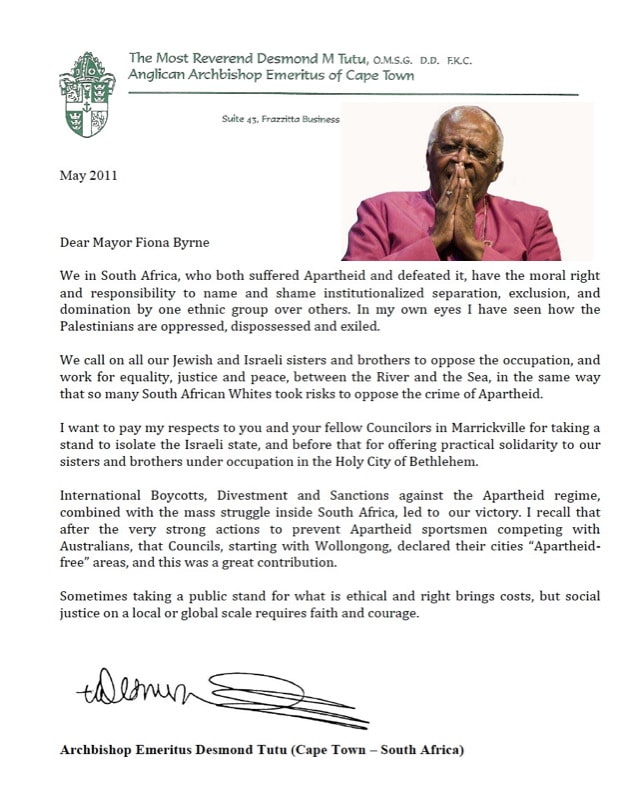 Brisbane BDS Campaign activists surprise shoppers by performing “we will boycott Israel” to the tune of a popular music anthem in the Myer centre food court below the Seacret Dead Sea Cosmetics stall. Activists have been calling on shoppers and Myer Centre management to respect the call to boycott products made in Israel until it respects human rights and complies with International Law.
The action was part of the global BDS movement to Boycott Israeli goods.

The Boycott Divestment Sanctions Campaign initiated by Palestinian trade unions and civil society in 2005 has the aim of * Ending Israel’s occupation and colonization of all Arab lands and dismantling the Wall * Recognizing the fundamental rights of the Arab-Palestinian citizens of Israel to full equality; and * Respecting, protecting and promoting the rights of Palestinian refugees to return to their homes and properties as stipulated in UN resolution 194