(SALEM, OR) – Retired Marine Captain Jim Brooks, age 79, is a victim of organic solvent exposure, Agent Orange, and a myriad of other toxic chemical exposures.

Jim Brooks has Alzheimer’s, a fatal brain disease that causes a slow decline in memory, thinking and reasoning skills. A Marine Mustang, Gunnery Sergeant Brooks, a jet engine mechanic, was promoted to 1st Lieutenant during the Vietnam War.

The father of six children, Captain Brooks spent almost 17 years of active service at MCAS El Toro. Cathy Brooks, his wife and a retired nurse, said that her husband made the decision to purchase a home off-base, which fortuitously prevented his family from exposure to the toxic chemicals in El Toro’s soil and groundwater. Unknown to him, his exposure to TCE would lead to Alzheimer’s disease, a very serious cognitive disorder.

Scientific literature identifies more than 100 industrial chemicals that are known to affect the human brain, causing cognitive symptoms. TCE is one of those chemicals.

The VA approved a 100% disability for Jim Brooks in 2011. He was diagnosed with Alzheimer’s dementia in 2002 and by 2010 the disease had advanced to the severe stages of dementia. There is no family history of dementia in siblings and grandparents. A nexus opinion from his physician stated that his exposure to TCE at El Toro was at least as likely as not the cause of his Alzheimer’s dementia. Marine Jim Brooks now resides in a nursing home. The disease had advanced to the point where he could no longer be cared for at home.

Sue Cast, one of Jim’s six children, put together her father’s VA disability and compensation claim with help from Veterans-for-Change’s CEO Jim Davis, Garden Grove, California. Jim said that most of the credit for the excellent VA claim goes to Sue Cast.

Sue said that, “We were well trained by one of the Corps best! When I went up to see him last July 4th the home had us take the military guys out in front of the Center and wait for the Air Force jets do a fly over, it was loud and as my father watched he just nodded his head to that familiar screech he knows all too well ….the Marine Corps could not have ordered a more dedicated, Gung-ho guy as my Dad.”

As part of his VA claim, Sue put together the following career time line and exposures’. The VA doesn’t require this step, but it’s obvious that it’s an excellent tool for documenting a disability claim. 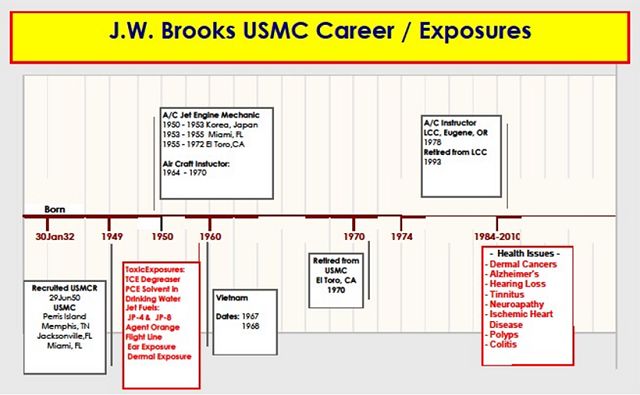 Although his memory has failed him to day, I’m sure Captain Brooks would be especially proud of the efforts made by Susan Cast, his daughter, in putting together anoutstanding VA disability claim. Her work is evidence of the love and affection of a daughter for her father and a Marine’s training in getting all the details just right.