Home World For The Sake Of Jewish Sensitivities 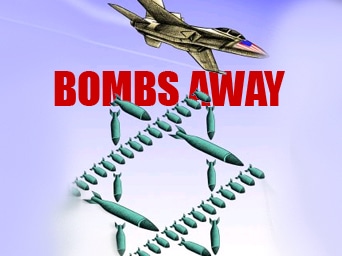 It occurred to me recently that the Palestinian solidarity discourse is spiritually, ideologically and intellectually driven by some very misleading terminology: crucial notions such as Zionism, colonialism and apartheid (heard in every discussion, and present in every text book about the conflict), are either confusing, or even delusional: I believe that they are there to actually block any attempt to grasp the true spirit and ideologies that drive the Jewish State rather than to clarify the situation.

Many of us tend to refer to Zionism as the ideological driving force behind Israel.

But make no mistake: Israel is not Zionism, and Zionist ideology and politics have very little at all to do with Israeli politics or practice.

It must be understood that Israel and Zionism are, by now, two distinct categories. While Zionism was defined by its founders as an attempt to ‘transform the Diaspora Jew into an authentic and civilised human being’, Israel can, nowadays, only be seen as the pragmatic product of such an ideology.

It may surprise many of you to hear that these days, Israel is not driven or even particularly inspired by Zionism any longer -it is, instead, engaged in self-maintenance. More so, Israelis are hardly even that familiar with Zionist ideology.  For most Israelis Zionism is little more than a dated and archaic concept – it may have historical significance -but it has zero meaning in daily life.

Zionism is, in fact, a Jewish Diaspora discourse. It is there to differentiate between world Jewry that largely supports Israel, and a few sporadic Jewish secular voices who want to maintain their Jewish national  identity while opposing the Jewish State.

The Zionist/ anti Zionist debate is, in fact, a debate that takes place within the Jewish Diaspora, and not within Israel itself. It belongs to the realm of Jewish identity politics. It has very little political significance out of that context.

Because Israel and Israelis are actually impervious to Zionism, ‘Anti Zionist’ activity and ideology have very little impact at all on Israel and Israelis.[1] Israelis are only concerned with direct actions against their Jewish State, and for them,  sanctions are  a matter that concern and worry them a great deal.  Israelis though, are hardly concerned at all with seeking solutions to the so called ‘Jewish Question.’ From an Israeli perspective the Jewish state is the ultimate solution for the ‘Jewish Question.’ I guess that from a realistic and pragmatic perspective, one may have to agree, Israel didn’t really solve the ‘Jewish Question’ it just moved it to a new place.

Why do we then, continue to make this crude mistake, and always refer to Israeli crimes as a Zionist symptom? Why don’t we refer directly and openly to the ‘Jewish State’, because at the end of the day, this is how Israel defines itself.

The answer is simple: it is because we really do not want to offend anyone. We accept that Jews have suffered all through their history and we accept their unique sensitivities.  Hence, voluntarily, we self-censor ourselves. We voluntarily give up on our capacity to think freely, coherently, openly and critically.

Zionism is not colonialism either. As much as many activists around us insist that we must regard Zionism as a colonial project, the truth must be stated: colonialism defines itself by having a clear material relationship between a ‘mother state’ and a ‘settler state’.  In the case of Zionism however, it is impossible to determine what was, or is, the ‘Jewish mother State’. In fact there is no Jewish mother State and there has never been one. Zionism is not a colonial project and it has never been one. It is indeed true that the Jewish State exhibits some colonial symptoms.[2] But then, some brain cancer  patients also exhibit some symptoms of migraine.  A proper diagnosis aims at discovering the true cause behind symptoms. To diagnose is to trace a true disease rather than provide a superficial explanation that may be linked to a number of sporadic symptoms.

But it is also clear why so many of us  love the colonial paradigm, despite it being flawed: the followers of the colonial paradigm accept that Israelis are not different from the British, French or Dutch; they just happen to celebrate their ‘colonial’ expansionist symptoms ‘100 years after everyone else’.  Also the colonial paradigm promises a ‘solution’ at the end of the road — a post colonial reconciliation is just a matter of time, they stress.

Again, I am sorry to disappoint so many people I really care about, but I have to say it: Zionism is original and unique of its kind, and it has no precedent in history. Unfortunately, it doesn’t fit into any materialist model, for the aspiration behind Zionism was, and still is, spiritually driven.

So why do we continue to make this crude mistake, and always refer to Zionism as colonialism? Why don’t we refer to Zionism as what it is; a totally unique Jewish ideological project?  Simple, because we do not want to offend some of the very few Jews who are kind enough to support Palestine.  We accept their sensitivities, and voluntarily remain quiet about it all. We would do whatever it takes to keep everybody happy. After all, we are a peace movement.

And what about apartheid? Is Israel an apartheid State? In Israel we clearly witness   racial separation and

legal discrimination. However, I would argue that Israel is not an apartheid system for apartheid was set in place to exploit the indigenous peoples, yet, to keep them living on the land.  Israel, on the other hand,  is there to destroy the indigenous population – the Israelis would be relieved if they woke up one morning to find out that the Palestinians had simply left the region.

Those who are Naïve enough to buy into the apartheid narrative probably believe that Israel  may collapse soon, because this is what history teaches us about apartheid. Again, we like the apartheid model because it makes Israel look (relatively)  ‘ordinary’. We do not want to offend anyone, especially the few Jews who support us.

But here is a question that I must address to righteous Jews and fellow Palestinian supporters around the world: do you really believe that the discourse of the struggle against the Jewish State should be shaped by ‘Jewish sensitivities’? Was the fight against Nazism shaped by German sensitivities? Did we take on board the Afrikaners’ touchy spots when campaigning against the apartheid? Isn’t the time ripe to call a spade a spade?  I do accept the crucial importance of Jews in this movement and I try to work with as many Jews as possible. Yet, I wonder, isn’t it time for Jews to overcome their sensitivities and look into  the subject with open eyes? Isn’t the time ripe for all of us to do the same?  Shouldn’t we question the supporters of the  Jewish State, and ask exactly what Jewishness stands for?

I believe that this is exactly what we have to do-for the sake of a better future  in Palestine, we must openly engage in these crucial questions. I also believe that more than anyone else, it is Jews who must confront these questions. I would expect Jewish activists within our movement to lead this move rather than trying to silence it.