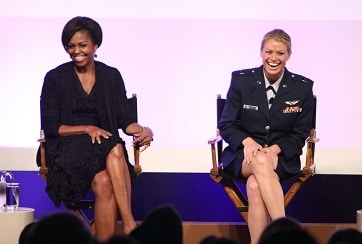 Speaking to an audience of about 500 producers, writers, actors and directors, the first lady discussed her “Joining Forces” military-support campaign and how Hollywood can play a role in her quest to stir up national support for military families.

Writer-director J.J. Abrams, who moderated the panel, kicked off the discussion by asking Obama what sparked her passion for military family support.

The first lady traced it back to her time on the campaign trail with her husband. As she met in small groups with working women, she heard voices she hadn’t heard from before – military spouses. These women — and men — talked about juggling careers and deployments, raising kids and managing moves, and dealing with finances alongside post-deployment reconnections.

“These stories took my breath away,” she said, “because they were so unfamiliar to me. And I thought, ‘Well, if I don’t know, and I’m educated and I consider myself aware, then where are we in this country? Why don’t we know about these families? Why don’t we know their struggles? Why aren’t we pushing for them?”

Obama said she vowed, if her husband got elected, to use her platform to give military families a voice, “because truly, these families are amazing.”

Military families also are strong, she noted, but because of this strength that’s so integral to military life, they often don’t complain or reach out for support.

“That’s one of the reasons we don’t know about them,” she said. “They count on each other, and they don’t ask for help. Well, they shouldn’t have to ask for help.”

In a year’s time, the first lady said, she’d like see a nation where military families know their sacrifices are understood and appreciated, and that everyone, including the entertainment industry, can step up and help.

“It can be telling a story on the big screen, on the small screen, or it can be helping a neighbor mow their lawn,” she said. People can volunteer to babysit for an afternoon, cook a meal, offer to fix a heater, or reach out to a reserve family living away from the support of a military installation, she added.

The entertainment industry can bring awareness to these families by showcasing their strength and sacrifice, Obama said.

“You have the vehicle to tell stories that just pull people in,” the first lady told the audience. “I … urge you to do what you do best. Be creative. Be funny. Be powerful. Move us, [and] move America to think differently about these issues and about these families, and about our men and women who serve so graciously.”

The task shouldn’t be too difficult for Hollywood storytellers, she noted, “because the stories are already compelling. The individuals are already pretty powerful.”

Obama thanked the industry for the work they’ve done already to spotlight military families. As an example, she talked about her next stop — an upcoming appearance on “iCarly,” a Nickelodeon TV series about a teenager who hosts a popular Internet show. On the show, Carly’s dad is deployed. The first lady admitted some nerves about her TV appearance, but said she’ll push them aside to have the opportunity to spotlight military families on the small screen.

“This is an example of the way that we can integrate these story lines into shows,” she said, “and it’s important for kids to hear themselves in the shows that they love.”

Military families will need the nation’s support for the long haul, Obama noted, as the “real work happens when these men and women come home and they’re dealing with the ramifications of war.

“This is a forever battle,” she added. “We have men and women who are serving our country every day, and they’ll be dealing with the consequences of that dedicated service for the rest of their lives, and we have to be there for them and their children.”

To resounding applause, Obama said she and Dr. Jill Biden, wife of Vice President Joe Biden, will continue shining a light on military families “so that America understands that when our country goes to war, we have families who are serving right along with them.”